With the International Maritime Organization’s (IMO) 2020 sulphur regulation changes now in the rear-view mirror, IMO 2030 represents the next major milestone in the bunker market. There are different ways that the market will meet these targets and the stricter ones outlined for 2050.

The reduction of the maximum sulphur content of bunker fuel from 3.5% to 0.5% required action from refiners and shipowners to mitigate the impact of the significant drop in demand for high-sulphur fuel oil and the corresponding increase in very-low sulphur fuel oil demand. The market has made the switch to low-sulphur marine fuel without too much of a fuss and the next topic of conversation for the IMO is decarbonisation.

The IMO in 2018 outlined an initial strategy for the reduction of greenhouse gas (GHG) emissions in the shipping industry, which detailed key milestones for the medium and long term. These targets use 2008 as the baseline year, providing targets for 2030 and 2050.

IMO 2030 targets a reduction in average carbon intensity (CO2 per tonne-mile) of at least 40% by 2030. Although low and zero carbon alternatives to bunker fuel will be a hot topic over the next decade, they will not be the most notable contributors to meeting IMO 2030 GHG reduction targets and their contribution will come to the forefront of discussion in the long-term outlook. This leads to the question of how will this 40% reduction in carbon intensity be achieved? 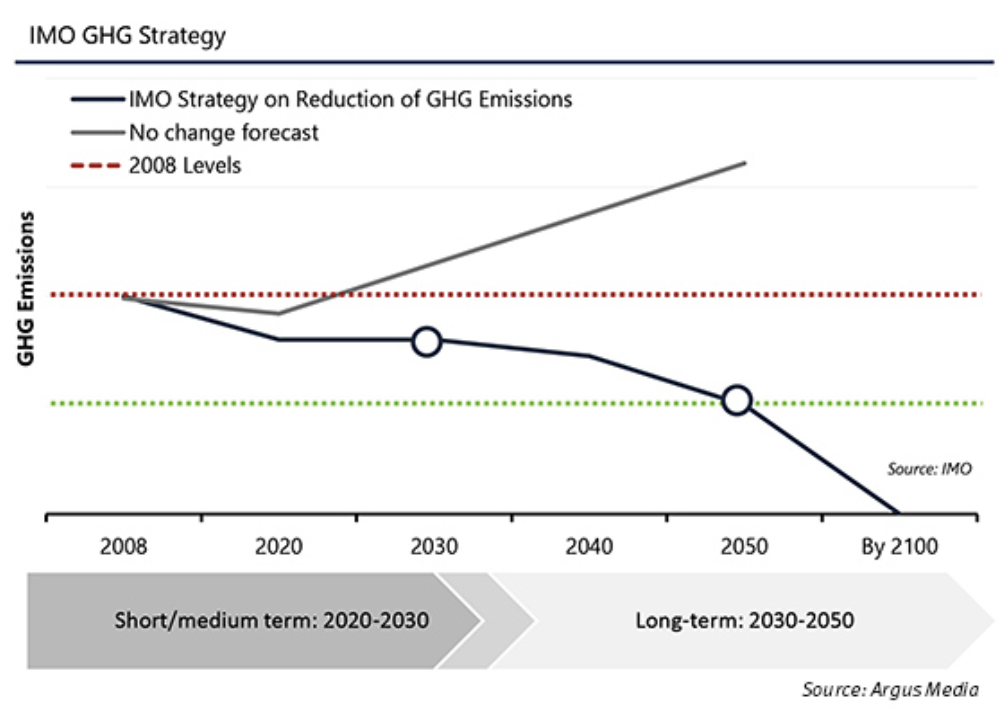 The drive towards GHG reduction started much earlier, with the adoption of mandatory technical and operation measures dating back to 2011, when amendments to MARPOL Annex VI regulations codified the requirements with regard to Energy Efficiency Design Index (EEDI) and Ship Energy Efficiency Management Plan (SEEMP). EEDI stipulates the required energy efficiency of new vessels and the IMO estimate that these two measures will together reduce around 420mn t/yr of CO2, equal to a reduction of 20-25% from the baseline.

Slow steaming represents another means by which carbon intensity can be reduced. This practice became commonplace 2010-2014 with crude prices above $100/bl. The improvement in efficiency is evident in the relationship between seaborne trade and historic bunker demand shown in the figure below. With slow steaming still present in the current market and with some limitations to application in the container market due to the increased voyage length, there are some limitations to its further employment. 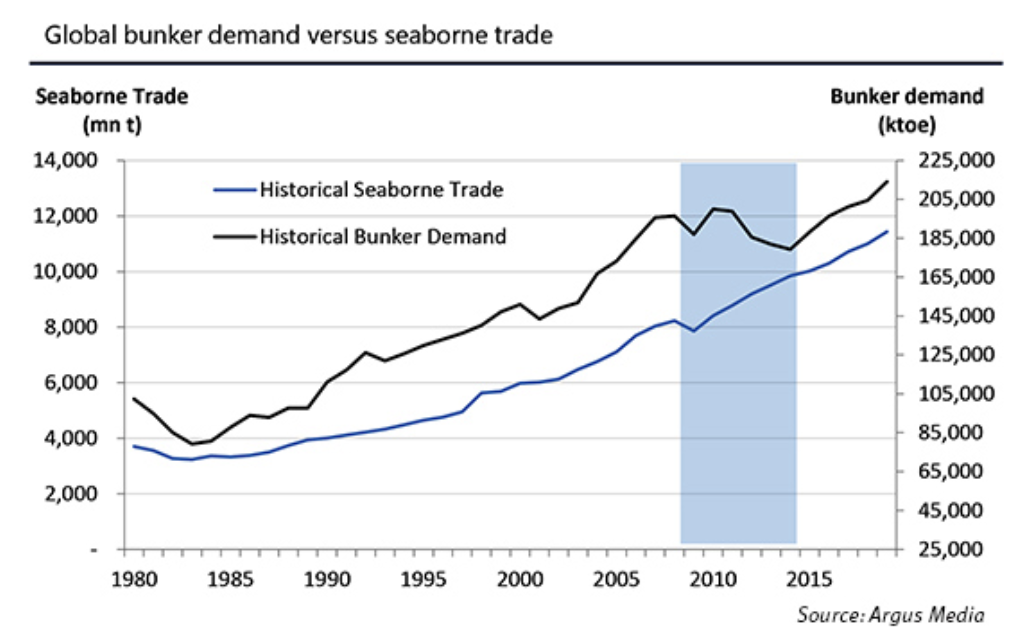 LNG as a transition fuel

In addition to design and operational improvements, a certain degree of fuel switching will also play a part in meeting the 2030 target. Demand for LNG as a bunker fuel has increased significantly but remains a relatively small portion of the overall global market. LNG is future proof when it comes to sulphur content. There is global infrastructure in place to facilitate expansion and the technology is established. LNG releases around 20% less CO2 than fuel oil and marine gasoil, meaning that alongside other measures it is likely to satisfy targets outlined for 2030. Despite being a selling point at present and through the medium term, this represents a notable drawback in the longer term as LNG’s CO2 reduction profile versus established marine fuels is insufficient to satisfy 2050 targets.

IMO 2050 and the need for zero carbon fuels

IMO 2050 will introduce far stricter targets, necessitating a 50% reduction of GHG emissions from shipping by 2050. In order to meet this more aggressive target by 2050, zero carbon fuels will need to play a part in the fuel mix beyond 2030. There are many possible options, each with its unique selling points and caveats. LNG will likely continue to play a part due to the life cycle of vessels, but one or more of biofuels, hydrogen, methanol or ammonia represent potentially notable contributors to the global pool of bunker fuel in the long term.

For these fuels to gain traction as a viable alternative to existing bunker fuels such as fuel oil and gasoil, they will need to make economic sense, be available in sufficient quantities, scalable and ideally have a high enough energy density to facilitate long haul voyages without notable sacrifices to capacity. Whether it is one option that moves to the forefront, or a combination of the different fuels, these targets will not be met without them. 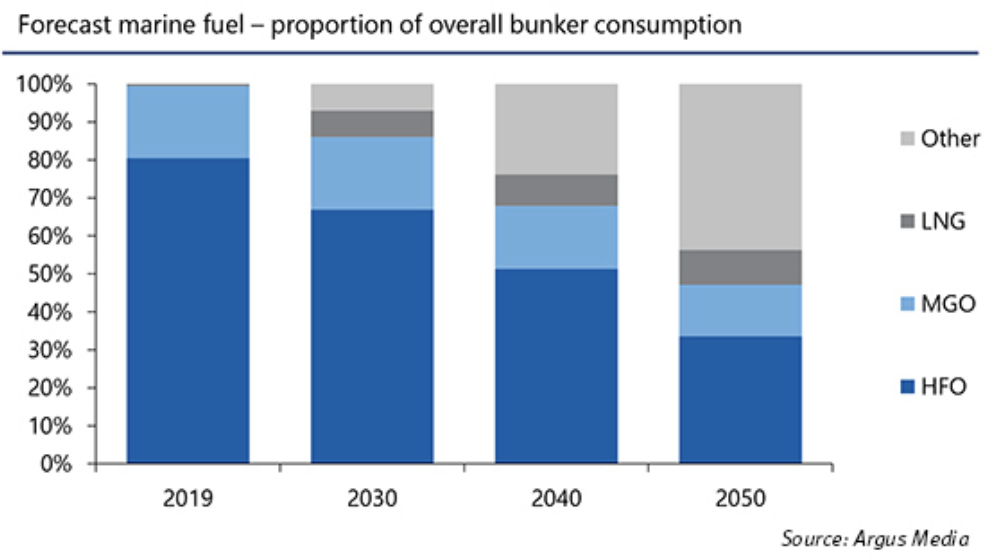 Argus estimates that around 45% of the fuel mix will have to come from non-oil sources and almost all of that will need to be zero or low carbon. Ammonia and methanol both have the advantage of an established global infrastructure and are relatively easy to store and transport compared to a fuel like hydrogen. Biofuels are also an interesting option, due to HVO and FAME also having established global infrastructure, but the sustainability of feedstock source is a key determinant of the overall sustainability and the limitation of indirect land use change is increasingly prioritised, which limits available volumes. Legislation in key road transport markets across the world and domestic financial incentives for blending these fuels could price them at a level that limits their viability in the marine fuels sector.

Despite the current furore surrounding these zero and low carbon bunker fuels, it is too early to speculate about the significance to which each of these fuels may contribute to the fuel mix in 2050, but it is safe to assume that at least one of them will see significant growth. The conviction demonstrated in the pushback from some stakeholders within the industry regarding IMO 2020, the GHG reduction targets for 2030 and 2050 should be taken seriously. It is not a question if zero carbon fuels will be present in the fuel mix, but of which will emerge as the most significant.