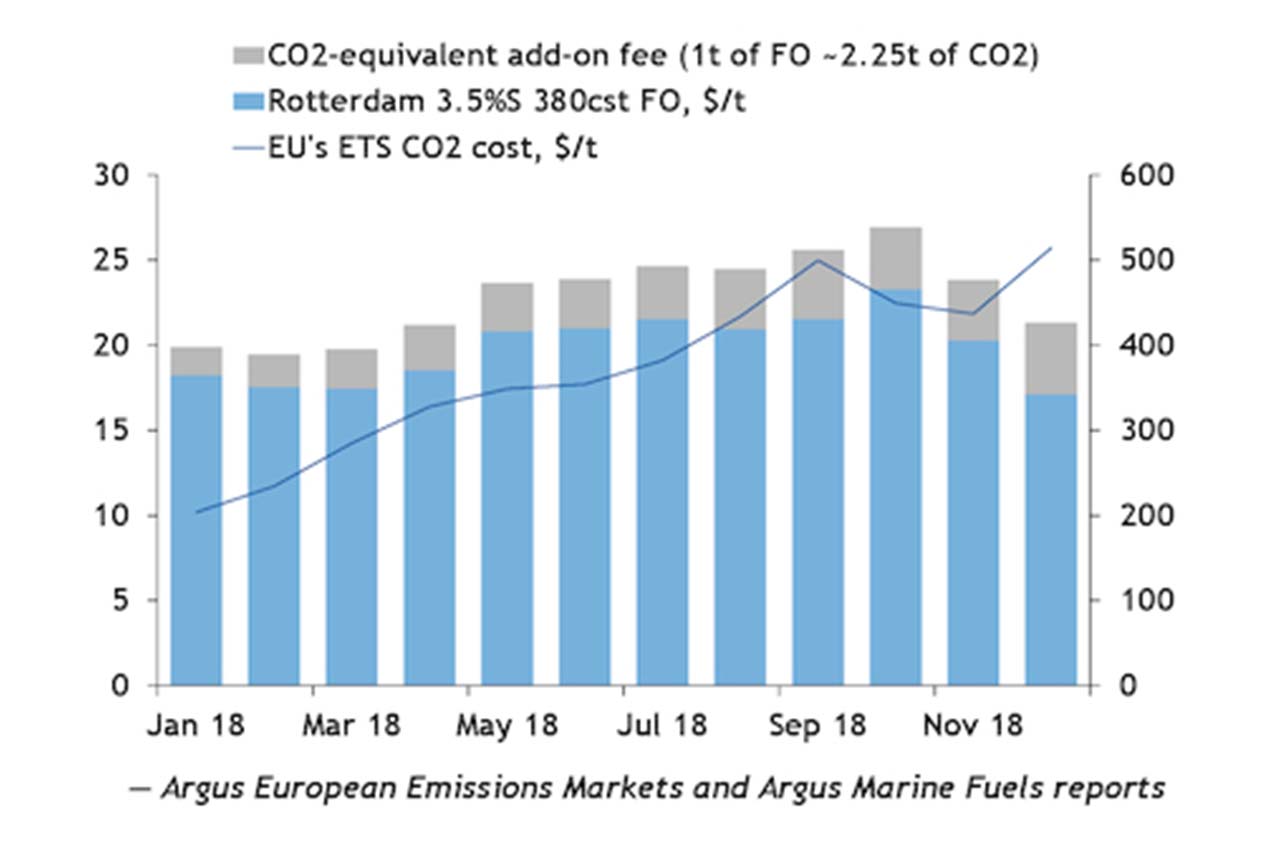 The implementation of a cap-and-trade system for greenhouse gas emissions from marine shipping could boost shipowners' bunker bills by 25pc at current price levels.

Shipping emissions of CO2 are not currently regulated, although the European Union (EU) has proposed plans to cover the sector.

Under the EU's Emission Trading System (ETS), companies receive or buy emission allowances, which they can trade with one another. In December, Argus-assessed ETS CO2-equivalent emission at $25.709/t, published in Argus' European Emissions Markets report. Since there are about 3.0-3.3t of CO2 in each tonne of marine fuel burned, CO2 emissions fees will raise the price of marine fuel by $77.13-84.84/t if the same ETS formula was adopted for marine shipping. Argus assessed high-sulphur 380cst bunkers at $342.68/t delivered in Rotterdam in December. In this instance, if ETS is applied, the bunker price would increase by about 24pc to about $426/t.

There have been a number of options floated to reduce greenhouse gas (GHG) emissions from shipping, some of which shipowners have already implemented because they are economically feasible, including using fuel efficient vessels and traveling at lower speed. Some ports have given financial incentives to shipowners who choose to plug in their vessels into the ports' electrical grids to power their auxiliary engines instead of burning fuel while docked. Some shipowners have employed LNG, methanol or biofuels for bunkering.

But some economists believe that charging shipowners for CO2 emissions could be the biggest incentive for curbing those emisisons. In a working paper published in September 2018, the International Monetary Fund (IMF) examined carbon taxation on marine fuels. One of the scenarios explored included implementing a tax of $7.50/t of CO2 in 2021 and increasing the tax annually by $7.50/t, thus raising it to $75/t of CO2 by 2030 and to $150/t of CO2 by 2040.

The reduction of maritime shipping greenhouse emissions was omitted from the Paris Agreement in 2015, leaving it in the hands of the International Maritime Organisation's (IMO) Marine Environment Protection Committee (MEPC), which oversees global marine fuel regulations. Environmental groups have criticized the IMO for acting slowly on GHG reduction measures.

At its meeting in October 2018, MEPC did not agree on specific greenhouse gas action. At its next meeting in May 2019, IMO is considering an initial strategy to cut global shipping sector emissions by at least half by 2050 compared with 2008 levels. If the IMO does not deliver an international shipping deal by 2021, the EU has said it could include shipping emissions in its ETS from 2023. European shipowners largely oppose the EU's ETS plan, because they will be subjected to higher bunker costs compared with their international competition.

Since most ports, countries and shipowners do not collect or report bunker data, comprehensive information on global marine fuel sales has been limited. The first step to reducing emissions would be to collect data on bunker consumption and analyze it. Starting on 1 January 2018, the EU required vessels 5,000 gross tonnes (gt) and above calling ports in EU countries as well as Norway and Iceland to collect and report their bunker consumption to the EU. The data is compiled by the European Maritime Safety Agency and will be published every year starting in June 2019.

The IMO also began requiring vessels to collect bunker consumption data one year after the EU on 1 January 2019. The data collection applies to vessels 5,000gt and above, on all international voyages. The data is reported to the vessel's flag country, which in turn reports it to the IMO. The IMO will summarize the data in annual reports.