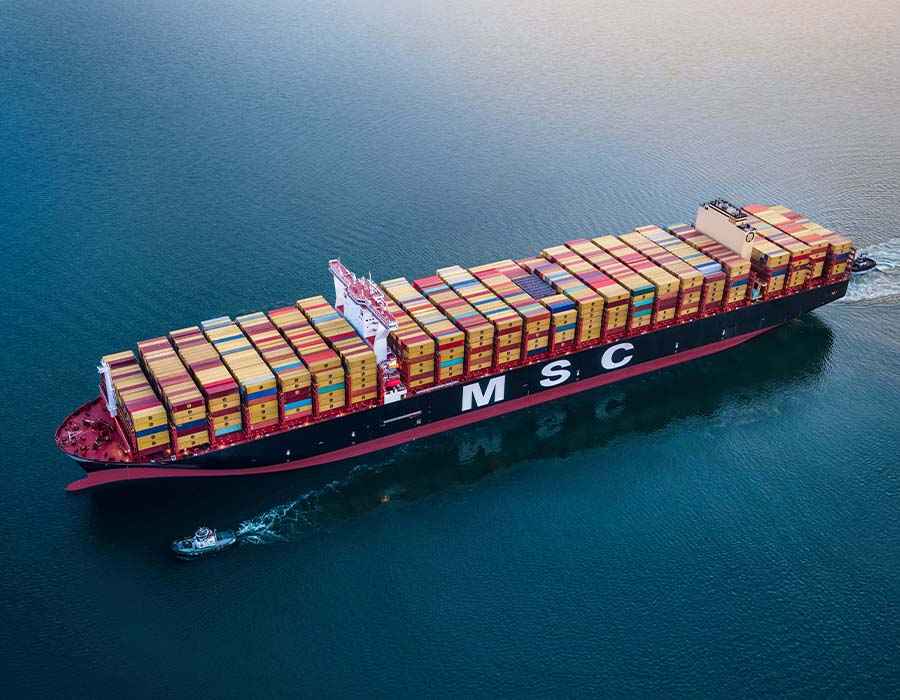 Some 52 years after its foundation in 1970, MSC, the long-term number two, today on 5 January 2022 overtook Maersk Group of Denmark as the world’s biggest container line.

Contrary to most other major ocean carriers, which reached their positions in the top ten through a series of mergers and acquisitions, MSC’s rise to the top was entirely organic.

In the first quarter of 2022, MSC is expected to close its first carrier acquisition and buy a 67% majority stake in the Brazilian regional and domestic shipping and logistics firm Log-In Logistica. This will add a further ca. 15,000 teu of capacity to the fleet of MSC Group.

Starting out in 1970 with a German-built second-hand vessel of just 2,900 dwt, acquired from Hapag-Lloyd and renamed PATRICIA, MSC flourished and over the years developed into a massive group.

In December of 2021, MSC signed an agreement with the French Bolloré Group to acquire Bolloré Africa Logistics, a logistics provider and terminal operator in Africa on the basis of an enterprise value, net of minority interests, of EUR 5.70 bn (USD 6.43 BN).

With a confirmed vessel order book of almost exactly 1,000,000 teu, the largest of all carriers, MSC is expected to further consolidate its position as the world’s largest container line over the course of 2022.

An up-to-date overview of the largest container lines can be found online at https://alphaliner.axsmarine.com/PublicTop100/.

Some media outlets wrongly claimed that MSC has already taken the number one spot in late November or mid-December. Alphaliner dismisses these reports as incorrect. These sources typically ignore the time lag from the agreement to acquire a secondhand ship to the actual on-hire and delivery to the new operator.

Furthermore, some sources incorrectly reported that MSC had already acquired Log-In Logistica and the related vessel capacity. This is not true. The Log-In Logistica Board of Directors approved an unsolicited offer to acquire a 67% stake by MSC on 21 December 2021, but the actual takeover is only expected to close in the first quarter of 2022.

Similarly, the fleet capacity of Linea Messina (ca. 23,000 teu) is not counted toward the MSC total, since MSC only controls a 49% minority stake.

MSC is now the largest ocean carrier by operated container vessel capacity. This includes vessels under MSC ownership and vessels that MSC charters-in or leases from third-party owners.

The vessel finally making the difference was the 4,992 teu MEXICO which was until recently on charter to Maersk.

MSC had already bought this vessel from the non-operating owner XT Shipping in June 2021 for USD 50.5 M. The MEXICO arrived at Singapore anchorage on 30 December and was handed over to MSC a few days later. The 2020-built Panamax vessel will leave Singapore in the early morning of 6 January under her new name MSC MEXICO.

For a period of some weeks, the capacity gap between MSC and Maersk Group is expected to remain tight, so that daily fleet fluctuations from charter on-hires and off hires could – theoretically – see Maersk Group move ahead again for short periods of time.

MSC is however expected to become a permanent number one in the first half of 2022, when numerous large newbuilt container ships are scheduled to be delivered to the carrier.

FOBAS: 16% decrease in off-specs of bunker samples in 1H May

Viscosity issues were the main cause of off-specs at Singapore, Koh Si Chang Transhipment Area, and Ust Luga port.

‘[...] no ships means no supplies, so a collaboration between the shipping sector and local administration is of paramount importance, and needs to be a two-way street,’ it said.