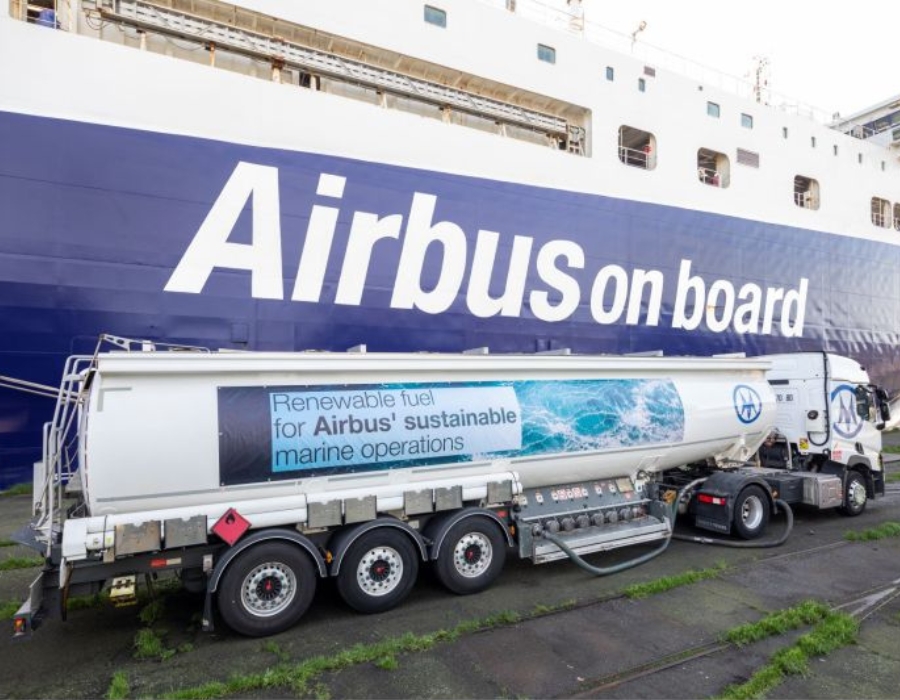 European multinational aerospace manufacturer Airbus on Wednesday (11 January) launched a test using renewable bunker fuel on one of its vessels to reduce its carbon emissions.

The test campaign was launched on the route Saint-Nazaire-Tunis-Naples at the end of December 2022, which will run for 18 months.

Provided by Neste and produced in Rotterdam, the renewable diesel fuel is made of HVO (Hydrotreated Vegetable Oil, or residual cooking oil) which contains no fossil fuels or additives. The fuel will be used for the first time on the Airbus vessel Ciudad de Cadiz on the route Saint-Nazaire-Tunis-Naples-Saint-Nazaire operated by LDA, Louis Dreyfus Armateurs, and carrying major components for the A320 family between its production sites.

During the 18-month test campaign, around a third of the total fuel (around 330 tonnes) is expected to be renewable, which will reduce CO2 emissions by up to 20% per trip compared to fossil fuel. In one year, on this route only, Airbus aims to save around 6,000 tons of CO2.

In order to reduce the impact of its industrial activities on the environment, Airbus is continously introducing alternative energy solutions across the different transportation methods it uses: air, road and maritime.

This test campaign will enable Airbus and its partners to evaluate the performance of the renewable fuel and the vessel’s engine, and confirm by how much it has been able to reduce its CO2 emissions.

In 2019, Airbus introduced Sustainable Aviation Fuel (SAF) for its Beluga operations and initiated the use of biogas trucks in 2021 to transport aircraft sections and major components across its production sites in Europe.

Suggestions include developing an IMO Green Corridors Programme to introduce new fuels and technologies and as a practical and explicit vehicle for an equitable transition.

‘We expect that the share taken up by HSFO sales will continue to rise this year, due to a larger share of the fleet getting scrubber-fitted,’ said Chief Shipping Analyst.

US Coast Guard monitors barge with heavy fuel oil aground after collision near Plaquemine, Louisiana

By designing ships' propellers and hulls differently, it can lead to lowered fuel consumption regardless of fuel type, says the Finland-based research group.