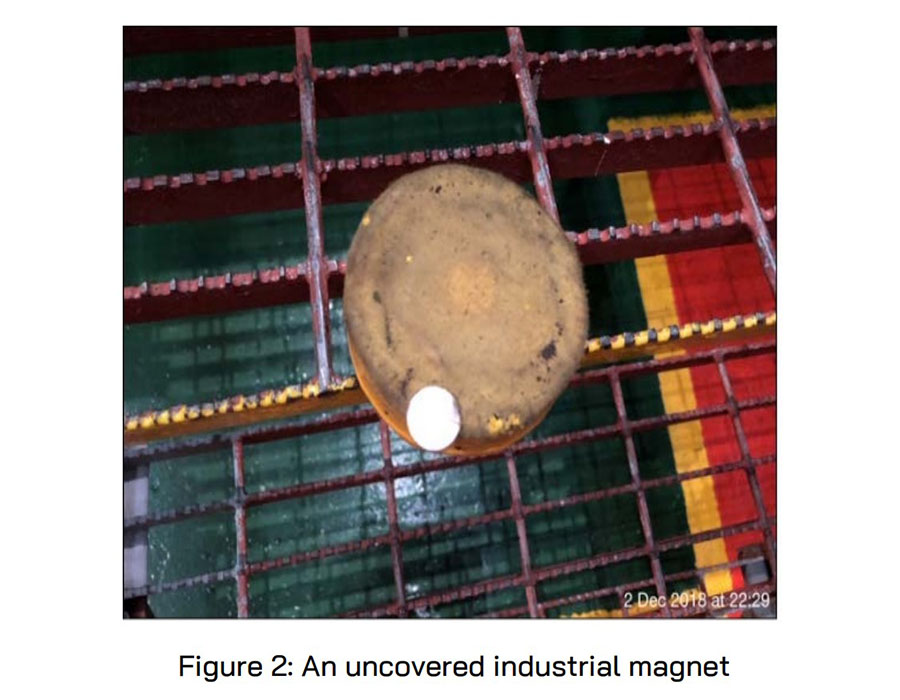 However many safeguards are put in place, there are always some who will go out of their way to try and cheat the system.

On the 1st January 2017, The Maritime Port Authority (MPA) of Singapore introduced the mandatory delivery of marine bunker fuel via Mass Flow Meter (MFM). This transition from sounding-based measurements to MFMs, was designed to provide a regulated level playing field for all stakeholders and help avoid any malpractice.

The following case, shows how it doesn’t always work out as planned….

Between October 2018 to April 2019, the press reported the use of magnets to influence MFM readings in favour of the bunker supplier. In June 2021, the Singapore court sentenced two bunker supply company directors with a 35-month and 34-month prison sentence, due to their role in a conspiracy to tamper with the MFM systems onboard a bunker tanker.

The court was shown that by deliberately placing an industrial-grade magnet [camouflaged to match its surroundings] at a certain point on the MFM, it significantly influenced the recorded mass flow rate (MFR) on the Bunker Metering Computer (BMC).

This action resulted in the BMC erroneously recording a higher MFR, falsely indicating a greater mass of marine fuel being delivered into the receiving vessels. This illegal action resulted in a total loss of US$336,930 for 14 vessels during that period.

A request by the authorities to have the MFM vendor review the data from the BMC on the two delivery barges revealed at least 66 bunkering operations during which the MFM had been tampered with.

This case perfectly highlights the commercial value of employing the services of highly skilled and competent bunker surveyors. VPS surveyors are expert in accurately monitoring fuel delivery in strict accordance with the Singapore Standard, SS:648, to help avoid such malpractice.

VPS will also check for any breach of system integrity and the status of the critical alarm. Having a surveyor’s watchful eye to detect illegal activities also sends a strong signal to barge and vessel crew not to undertake any intended non-compliance.

VPS BQS provides every customer with knowledgeable and professional surveyors who follow strict work procedures and documentation to accurately control the bunkering operations. Our zero tolerance policy to corrupt practices means that any illegal activity is minimized, if not eradicated. To find out how VPS BQS services can save $81, 200 per vessel per year, please read: VPS White Paper: Quantity Shortage Prevention for Marine Fuels

Company’s partners have delivered protection to shipping companies, some of whom were previously unable to access hedging products from investment banks.

Newly added Sustainability Award was presented to Sembcorp Marine Ltd for its contributions to decarbonisation, including building a LNG bunker tanker.