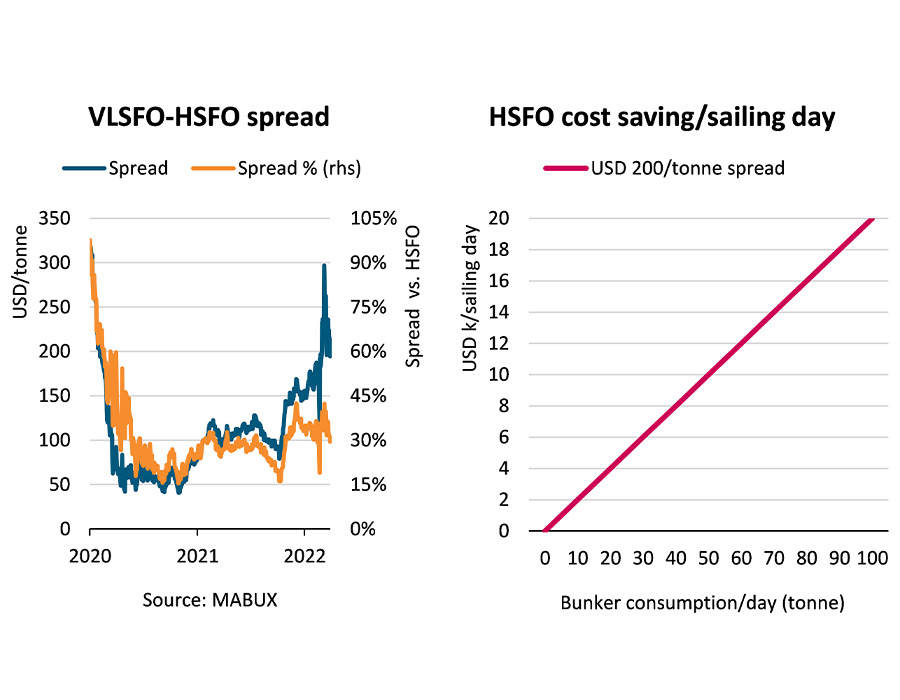 Niels Rasmussen forecasts the HSFO price, however, could rise if Russian volumes coming into the market start declining due to sanctions.

Ships that still use HSFO must install a so-called scrubber to achieve an equal reduction in SOx emissions and thereby comply with the sulphur regulation which entered into force on 1 January 2020.

“Currently, 12% of the combined bulk, container, and tanker fleet has a scrubber installed. The majority of ships are therefore still dependent on low-sulphur fuels and their cost competitiveness is influenced by the cost spread between VLSFO and HSFO,” explains Rasmussen.

Crude tankers and container ships have the highest scrubber installation rate at 29% and 17% respectively, with bulk carriers at 12% and only 5% for product tankers.

After bottoming out in late October 2020 at USD 40/tonne the cost premium for VLSFO has since increased, settling at around USD 150-160/tonne in late 2021.

“Since Russia’s invasion of Ukraine, the spread has again increased and now appears to have settled around USD 200/tonne. In percentage terms the VLSFO premium is still around 30%, however, in absolute terms it translates into a saving for ships with a scrubber installed of USD 2,000/day for every 10 tonnes of bunker fuel consumed,” adds Rasmussen.

“If this premium continues, charterers’ willingness to pay a premium for ships with a scrubber installed will surely increase accordingly.”

Some analysts are in the meantime predicting that HSFO may soon follow VLSFO upwards if the volumes of Russian HSFO coming to market reduce through sanctioning (whether self-sanctioning or government sanctions).

MSC expected to become permanent number one in 1H 2022, when numerous large newbuilt container ships are scheduled to be delivered to the carrier.

Alternative fuels allow massive reduction in CO₂ emissions over the cycle from production to fuel consumption; at least 80% for air and 90% for sea transport.