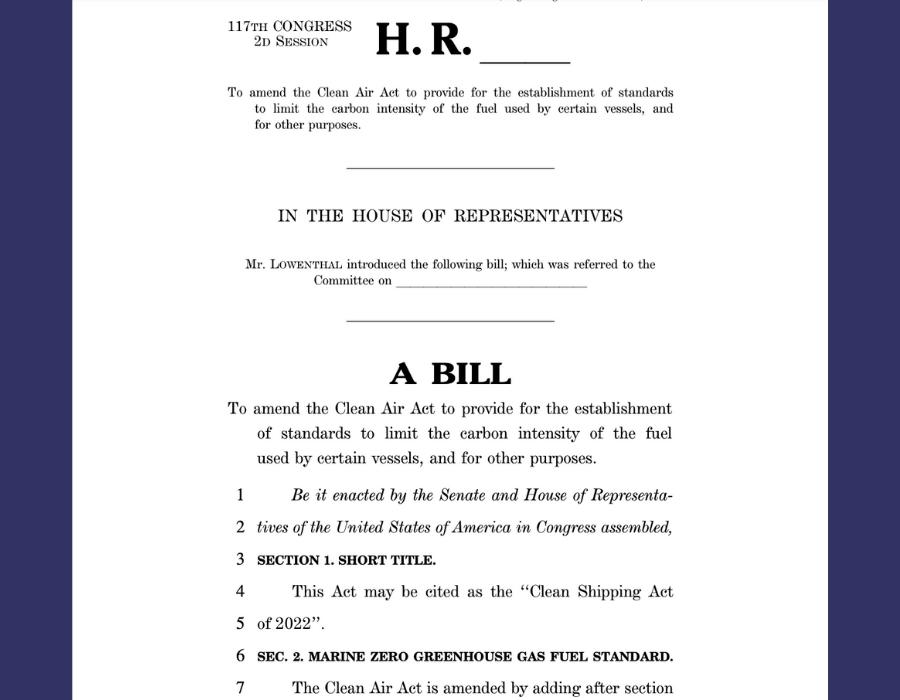 US Congressman Alan Lowenthal, who represents the Port of Long Beach – one of the nation’s busiest cargo ports– on Tuesday (12 July) introduced the Clean Shipping Act of 2022, a legislation aimed at zeroing out pollution from all ocean shipping companies that do business with the U.S.

The bill is cosponsored by Congresswoman Nanette Barragán, who represents the Port of Los Angeles, which with the neighbouring Long Beach port comprise the busiest container port complex in the Western Hemisphere.

Congressman Lowenthal’s bill aims to clean up the shipping industry, which on its own produces more emissions than all but five individual countries in the world. The legislation will also protect the health of port communities, address environmental injustice, and provide solutions to the climate crisis.

“Since my earliest days of public service on the Long Beach City Council three decades ago, I have worked to clean up the maritime industry,” Congressman Lowenthal said. “This legislation continues this effort.”

The bill directs the Environmental Protection Agency (EPA) to:

“The Clean Shipping Act of 2022 is bold legislation that will make the United States a global climate leader in addressing pollution from the shipping industry and protect the health of port communities in Los Angeles and around the country,” Congresswoman Barragán said.

“This is a big step forward for climate-smart ports and a clean energy future for every community. Proud to support this legislation as an original co-sponsor. Thank you to Congressman Lowenthal for your leadership and partnership to clean up the maritime industry and advance the greening of our ports.”

Emitting almost 1 billion metric tonnes of climate pollution per year, the shipping industry’s annual emissions are roughly the same as all the coal plants in the U.S. combined. The sector could account for 17-18 percent of all global emissions by 2050 if corrective policies are not put in place.

The International Maritime Organization (IMO), the United Nations agency that regulates shipping, has set a goal of cutting shipping emissions by at least 50 percent below 2008 levels by 2050; however, the IMO’s strategy is not aligned with achieving the goal of the Paris Agreement to limit global average temperature increase to 1.5-degrees Celsius in order to avoid the worst impacts of climate change. Coming legislation will work to close that gap.

“We no longer have the luxury of waiting to act,” said Congressman Lowenthal.

“We must face the fact that we are at a tipping point in the climate crisis; we must move beyond fossil fuels, and that includes air, land and sea transportation sources. No emissions sources can go overlooked.”

“This legislation will set clear standards and drive the investment and innovation we need to transition to a zero-carbon future. It will clean up our ports once and for all, with a straightforward nationwide policy. This bill is the right policy for the future of our planet, for the health of our communities, and ultimately for the resiliency of goods movement.”

Note: To read the full text of the bill, click here.

Singapore would continue proactive support to the maritime industry, says Minister for Trade and Industry.

Ras Al Khaimah is home to one of the world’s largest limestone quarries; the four RAK ports handle around 2,000 vessels yearly and aims for expansion.

Caribbean LNG Inc. awards INOXCVA a contract for “Design, Engineering & Supply” on a turnkey basis for the terminal, which will provide natural gas for APC’s on-island 40 MW power plant.