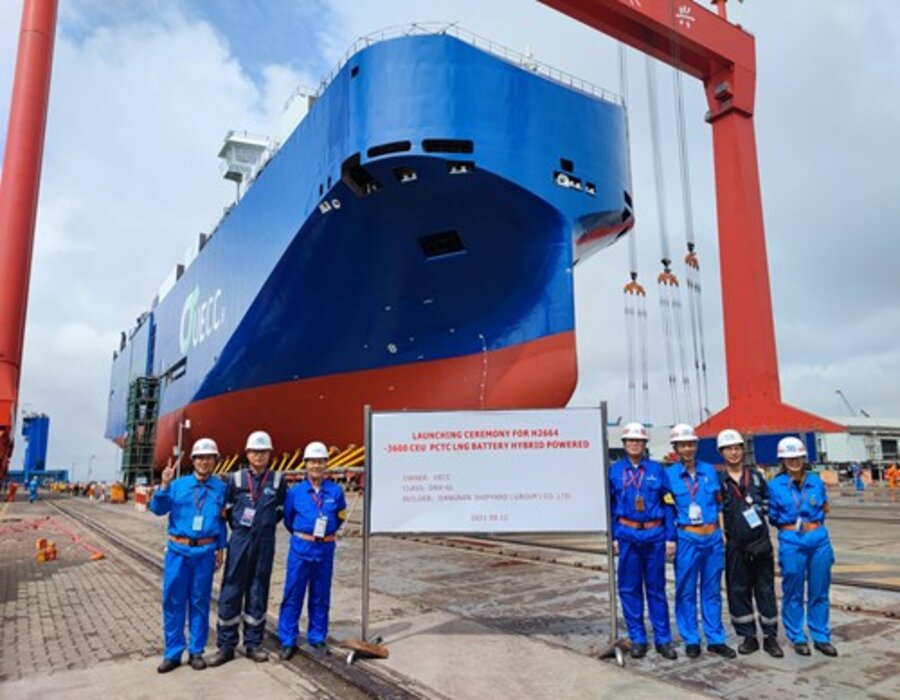 Hull number H2664 hit the water in a launch ceremony at the Shanghai yard on 16 August and is due for final delivery along with the third vessel in the first half of 2022, while the first unit launched earlier this year is set to be delivered later this autumn after final commissioning.

UECC has been a front-runner in adapting hybrid technology for the car carrier shipping segment in pursuit of lower CO2 emissions, building on a pair of pioneering dual-fuel LNG-powered PCTCs that have now been in commercial operation for the past four years.

“The intention was to further improve on these two E-class vessels, Auto Eco and Auto Energy, by rationalising fuel consumption through the use of hybrid battery power,” says Jan Thore Foss, Head of Ship Management and newbuilding .

He states, “the yard responded to the challenge by employing Jiangnan Shipyard Group’s internal design firm to carry out engineering work to adapt the hybrid technology, supplied by WE Tech of Finland, for the ground-breaking newbuild project.”

“There have been a number of technical challenges to overcome, such as streamlining the shaft generator for a dual-fuel engine and determining whether the bow thruster could run on battery power when entering and leaving port,” Foss adds.

The shaft generator enables the vessel to recharge its batteries while at sea so it can run the bow thruster in/out of port solely on battery power, contributing to reduced emissions in line with port authority requirements.

The use of a battery hybrid solution will enable UECC to exceed the IMO target to reduce carbon intensity by 40% from 2008 levels within 2030.

Emissions of carbon dioxide will be reduced by around 25%, SOx and particulate matter by 90% and NOx by 85% from the use of LNG, while the newbuilds will also meet the IMO’s Tier 3 NOx emissions limitations for the North Sea and Baltic Sea.

Foss says the newbuild programme remains on schedule despite significant logistical hurdles due to lockdown and travel restrictions that have led to difficulties in procuring equipment from global suppliers and hit manpower capacity for construction work, which requires hundreds of workers.

“The newbuilds were contracted in 2019 just before the pandemic broke out so fortunately we had equipment vendors in place, but the main challenge has been getting service engineers into China,” he says.

“We were initially forced to set up a temporary site team comprising solely Chinese nationals to get the newbuild project moving as flights into the country were cancelled. It has also been necessary to use digital tools such as conferencing apps to supervise the project remotely.

“The yard has though performed exceptionally well to re-allocate labour resources to maintain progress on the project.”

Once delivered, the newbuild trio will give UECC five eco-friendly PCTCs out of its 17-vessel fleet as its focus on sustainable operations is set to give the leading shortsea carrier a commercial edge in a green shipping future. It states.

‘We are glad that the process has now been completed,’ says Mika Wiljanen, CEO of St1 Norge AS.

From 1 February, the license for bunker fuel transporters covers the bunkering or debunkering of residual fuels and distillates (fuel oil and diesel) and biodiesel.

Tanker duo will utilise the ‘e5 tanker’ concept to run on batteries to reduce environmental impact; vessels designated to service Tokyo Bay from 2022 and 2023.