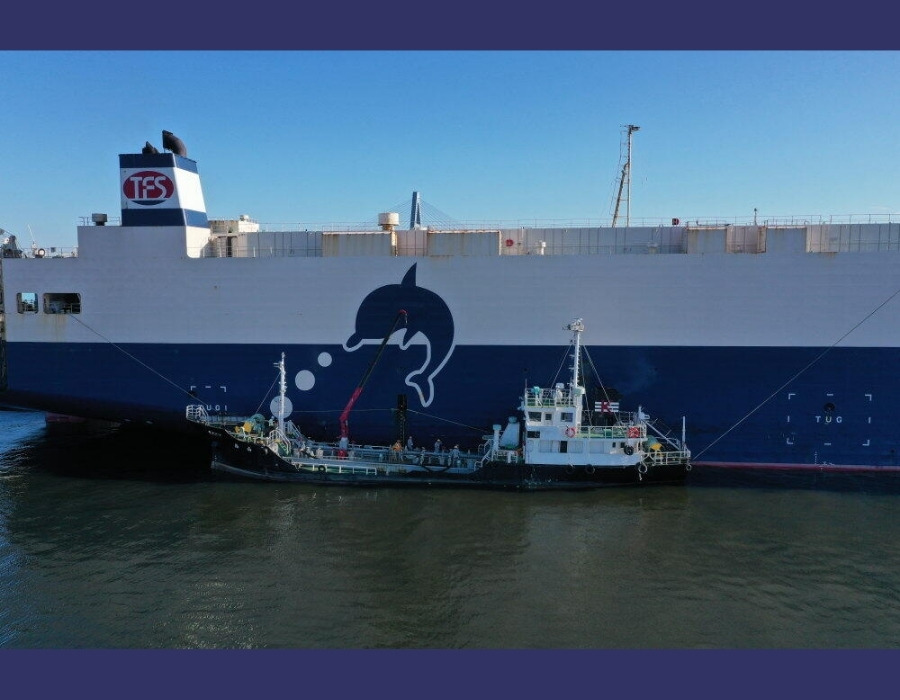 The car carrier was operated by Toyofuji Shipping Co., Ltd. and the bunkering operation was done through bunkering ship Shozan.

This initiative was implemented as part of the ‘Study for the Promotion of Carbon-Neutral in Coastal Shipping’ included in the FY2021 supplementary budget for Japan’s Ministry of Land, Infrastructure, Transport and Tourism (Cabinet decision on November 26, 2021). It was the first attempt in Japan to supply blended fuel that combines low sulfur C heavy oil and biofuel for coastal trading vessels.

Starting with the first biofuel operation trial at the Port of Singapore in April 2021, the Group also supplied biofuels to oceangoing ships at the port in June 2021. In April this year, the Group conducted the trial for a tugboat operating within a port for the first time in Japan.

This time, the Group conducted a biofuel supply trial for domestic car carriers at the Port of Nagoya, which handles the largest volume of goods in Japan in order to study the effectiveness of biofuel and decarbonise coastal shipping.

The biofuel that was supplied this time was derived partially from waste cooking oil collected from Toyota Group and Toyota Tsusho Group companies in Japan through cooperation between Toyota Tsusho and Daiseki Eco. Solution Co., Ltd.

The Japanese government is promoting the conversion of marine fuels from heavy and light oil, which are petroleum-derived, to alternative fuels. Although there are expectations for ships to use hydrogen and ammonia in the medium to long term, due to accompanying requirements such as expensive investments and technological development, biofuel is currently regarded as a viable prospect for carbon-neutral fuel.

Free platform to raise awareness and exchange views on maritime safety will be held between 29 August to 2 September; participants can attend in-person or online.

According to the circular, the ban for open loop scrubber washwater is in effect until an “environmental standard is issued in this regard”.