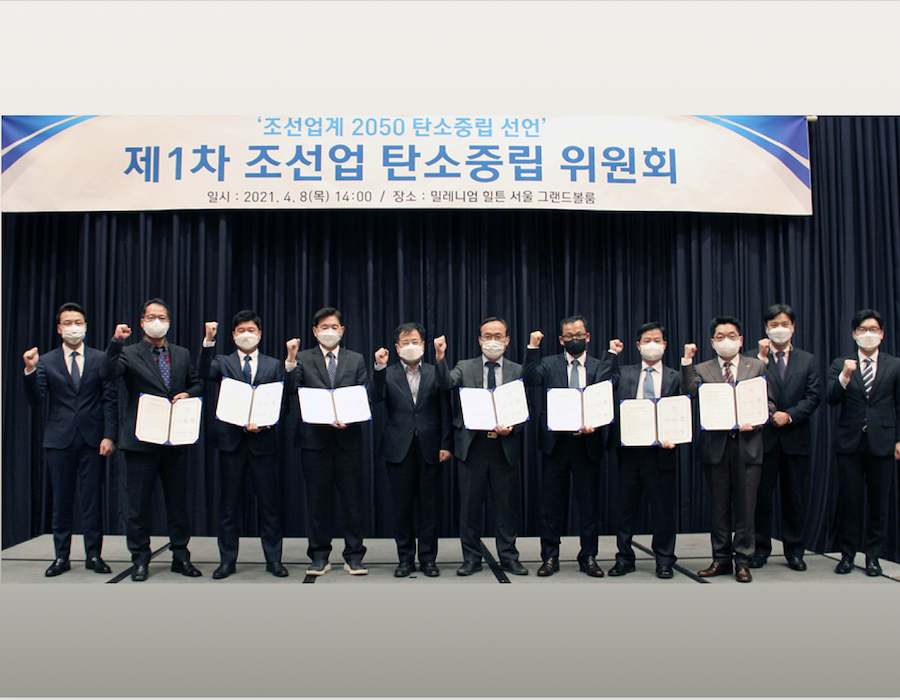 The South Korean Ministry of Trade, Industry and Energy (MOTIE) on Thursday, 8 April said the top six South Korean shipbuilding companies made a joint declaration to achieve carbon neutrality by 2050.

To mark the occasion, MOTIE held an inauguration ceremony to launch the “2050 Joint Declaration of Carbon Neutrality in the Shipbuilding Industry ” which was attended by representatives from Hyundai Heavy Industries, Samsung Heavy Industries and Daewoo Shipping and Marine Engineering.

At present, the South Korean shipbuilding industry emits approximately 2.08 million tons of greenhouse gases a year (last updated 2017). Most of the emissions are indirect emissions from the electric power used in various processes and also various bunker fuel trials.

At the ceremony, MOTIE and the shipbuilding companies formed a ‘Chosun Carbon Neutral Committee’, and the committee is developing strategies to use more renewable energy in the shipbuilding industry.

These include replacing bunker fuels with green fuels, developing energy monitoring systems tailored for shipbuilding so that greenhouse gas emissions can be reduced and creating tax credit for any investments made to create energy efficient facilities and infrastructure.

In particular, in relation to large-scale R&D projects ship orders are moving from being solely cost-oriented to a more environmentally friendly focus, said MOTIE.

“The government also expressed its willingness to promptly promote environmentally friendly ship technology development projects that are currently so that the Korean shipbuilding industry can competitively remain ahead of the curve,” said MOTIE in a statement.