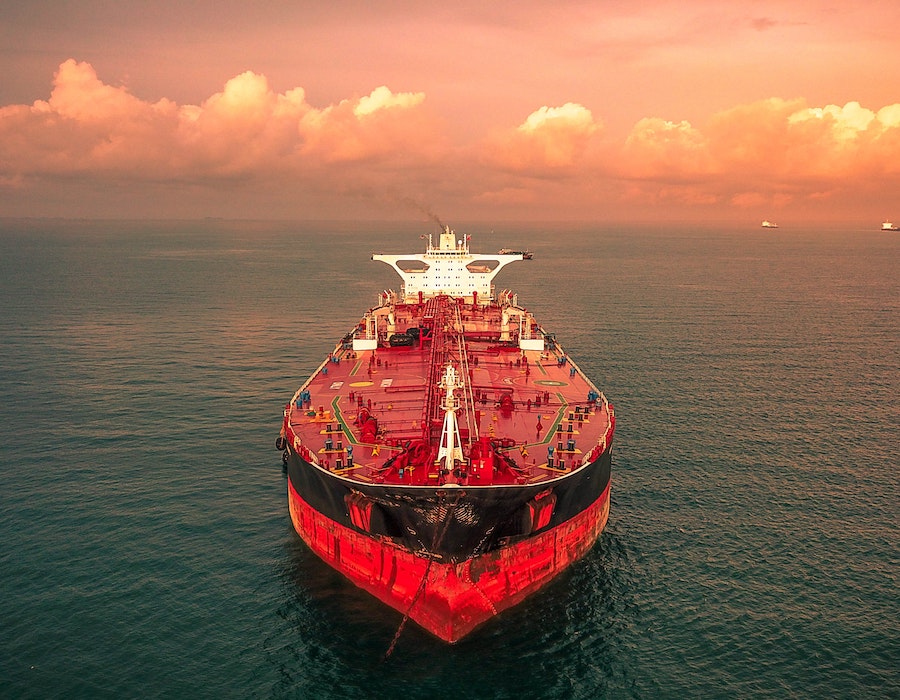 Think-ING, an online publication by Dutch multinational banking and financial services corporation ING on Wednesday (24 March) published a summary on how the current bunker spread can be supported in the foreseeable future by certain market forces; it was written by Warren Patterson, Head of Commodities Strategy.

Having disappointed for much of last year due to the Covid-19 impact and OPEC+ production cuts, the VLSFO- HSFO (Hi-5) spread is now back above $100/t. We believe the spread should be well supported as we move through the year. But much will depend on how quick OPEC+ brings back output, along with Chinese VLSFO production growth

While oil demand was significantly hit last year as a result of the Covid-19 pandemic, bunkering demand held up relatively well. IEA numbers show that bunkering fuel demand is estimated to have fallen by around 4.3% year-on-year, less than the declines seen in jet fuel, gasoline and road diesel demand. If we also look at sales data from key ports, some of these ports in fact saw YoY growth in sales.

Singapore bunker fuel sales increased over 2020, growing by 5% YoY, according to data from the Maritime and Port Authority of Singapore. This growth has continued into 2021, with sales in the first two months of the year up 2.7% YoY. Full year sales will likely end up higher YoY, with a global recovery expected to see average seaborne trade volumes above pre-pandemic levels.

In Rotterdam, it was a similar story, with 2020 bunker fuel sales growing by almost 6% YoY.

However, and probably not surprising, bunker sales in Fujairah were under pressure over 2020. Tankers are a key source of bunker demand in the region, but with the collapse in oil demand, along with OPEC+ output cuts, demand has suffered. Fujairah bunkering sales in 2021 will likely improve YoY, with oil output cuts set to ease along with a recovery in oil demand. 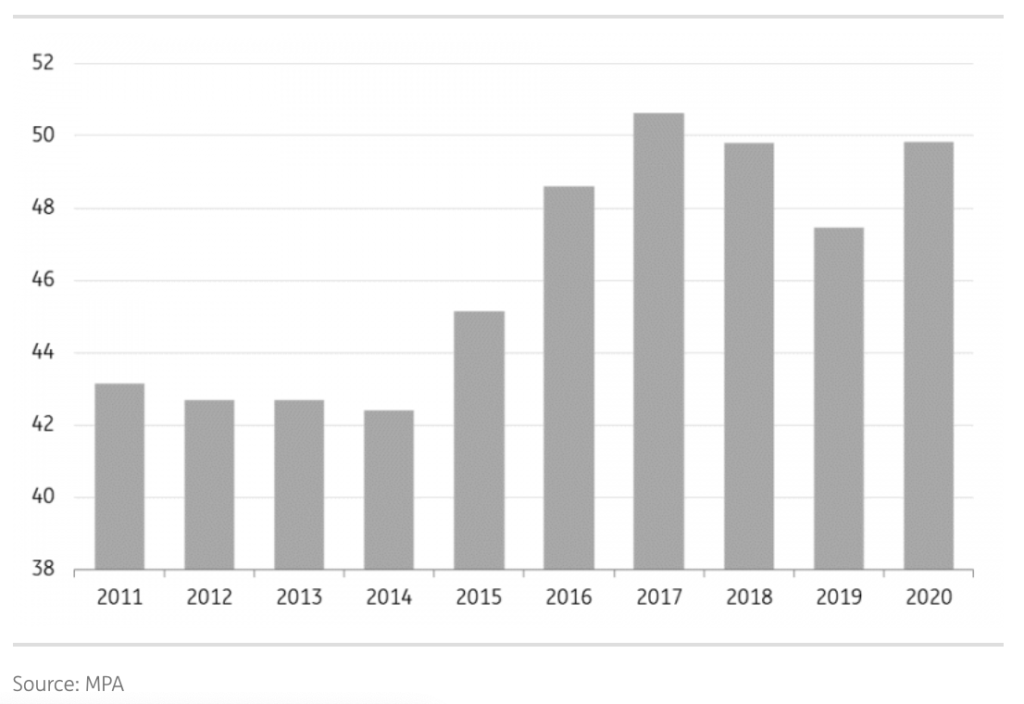 VLSFO clearly the fuel of choice

Both Singapore and Rotterdam provide a good breakdown of bunker sales by fuel type and these numbers clearly show that very low sulphur fuel oil (VLSFO) is the fuel of choice for the shipping industry.

In Singapore, in 2020, the first year of the IMO sulphur regulatory changes, 68% of total sales consisted of VLSFO, whilst the proportion of high sulphur fuel oil (HSFO) sales was 21%. In the previous year, VLSFO accounted for just 12%, whilst HSFO made up 79% of total sales.

In Rotterdam, VLSFO sales in 2020 made up 44% of total bunker sales, whilst HSFO sales came in at 28%. Rotterdam does have a much higher proportion of marine gasoil (MGO) and ultra-low sulphur fuel oil (ULSFO) sales than Singapore. This would likely reflect Rotterdam falling under the Emission Control Areas (ECA), which requires fuels with even a lower sulphur content be used. In ECA waters, ships must use a fuel with a maximum sulphur content of 0.1%. 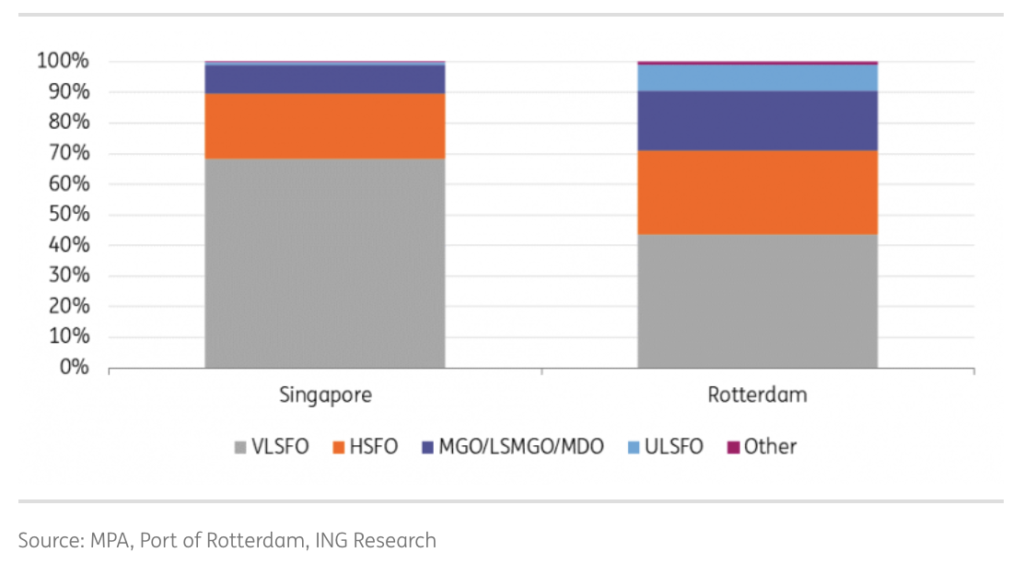 Fuel oil output from refiners has been trending lower over the years, with refiners adjusting their yields where possible to minimise fuel oil output. However, 2020 clearly saw a more meaningful fall in fuel oil output, with refiners around the world reducing utilisation rates as a result of poor refined products demand and poor refinery margins. According to JODI data (not all countries report to JODI), global fuel oil output over 2020 averaged a little under 5.1MMbbls/d, down a little more than 11% YoY. The low point was in August 2020, where output averaged around 4.7MMbbls/d, almost 1.2MMbbls/d lower YoY.

We have seen output start to recover from the lows in the middle of last year, and data for December shows output averaged 5.15MMbbls/d. As we move through 2021, the expectation that refinery throughput will continue to recover as we see a broader recovery in refined products demand, should only see fuel oil supply increase. This suggests we should see some downward pressure on fuel oil cracks. However, given that we expect a recovery in oil prices, we should see outright fuel oil prices moving higher. 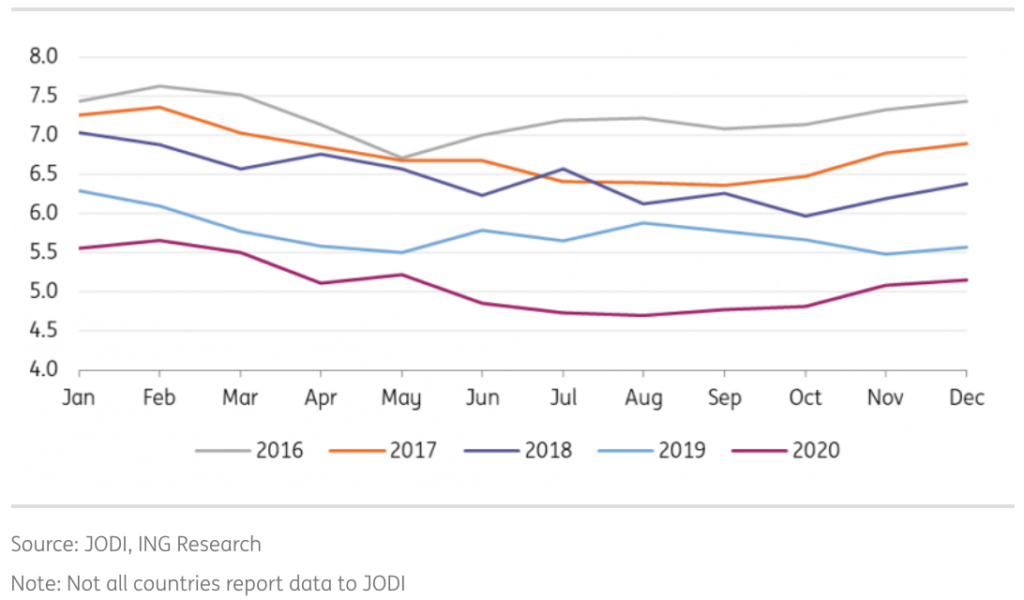 OPEC+ easing should weigh on HSFO

Another factor which helped to tighten up the HSFO market was the record output cuts from OPEC+. These cuts would have seen producers cut heavier and sour crudes first, which would mean that refiners also yield lower volumes of HSFO. This is reflected in IEA data, which shows that residual fuel oil yields in OECD countries fell to 4.7% over the summer of 2020, but started to edge higher once again as we saw OPEC+ ease from the record cuts seen between May and July of last year.

While OPEC+ is easing cuts at a slower pace than initially expected, they should continue to increase output gradually as we move through the year, given the expectations for a broader oil demand recovery. This should increase the supply of heavy and sour crude in the market, which should result in residual fuel oil refinery yields increasing once again. A factor which for much of 2020 weighed on the VLSFO market was growing supply from China. Tax changes and plans from the government to grow coastal bunkering hubs, saw refiners ramp up VLSFO output. In 2020, fuel oil output from China grew by 38% YoY to total 34mt. This is even though refiners cut operating rates significantly during the peak of the Covid-19 outbreak in the country. This strong growth has continued this year, with fuel oil output over the first two months of 2021 increasing by 42% YoY, although this does reflect the base effect, as refiners in China cut operating rates during this period last year. Government data does not give a breakdown of production of fuel oil by type, but it would be safe to assume that the bulk of this growth would be in VLSFO. In addition, there have been several announcements from refiners in China stating their intentions to increase VLSFO capacity over the years.

According to a report published by The Oxford Institute for Energy Studies, major state-owned refiners planned to produce a little more than 18mt in 2020, and with planned capacity expansions this is set to grow to 23mt in 2021, 25mt in 2022 and 30mt by 2023.

Scrubbers and the Hi-5 spread

Clearly last year when we saw the Hi-5 spread trading below US$50/t, there would have been many shipowners rethinking their plans to install scrubbers, given the payback period for the scrubber installation would have grown by several years. Installations were delayed last year due to the weakness in the spread. However, with HSFO having come under some pressure this year, along with stronger demand for lower sulphur fuel from the power industry in North Asia, the spot spread widened  back out to more than US$100/t at one stage, whilst the spreads further along the forward curve are well above US$100/t.

While it’s unlikely that we see the Hi-5 spread trade back to pre-IMO 2020 levels, we believe that the spread will remain well supported through the year. This is assuming that we do see a broader recovery in oil demand in 2021, along with OPEC+ gradually easing their supply cuts. The latter assumption is a key risk for the market, given that OPEC+ is already taking longer than expected to increase output, and so delaying the expected return of heavier and sour crude supply.

The other downside risk for the spread remains China, and whether there are any surprises in terms of VLSFO supply growth this year.

We believe methanol will be a transformative fuel in ocean freight, says Managing Director of IGP.

“Stena Pro Patria” the first of three methanol-fuelled vessels delivered in 2022; a further three newbuilds are due for delivery between now and 2024.

IBIA board suspends all services to Russian members, until further notice

‘Our thoughts are with the people of Ukraine, and we support international calls for hostilities to cease immediately to allow peace to return to the region as soon as possible.’