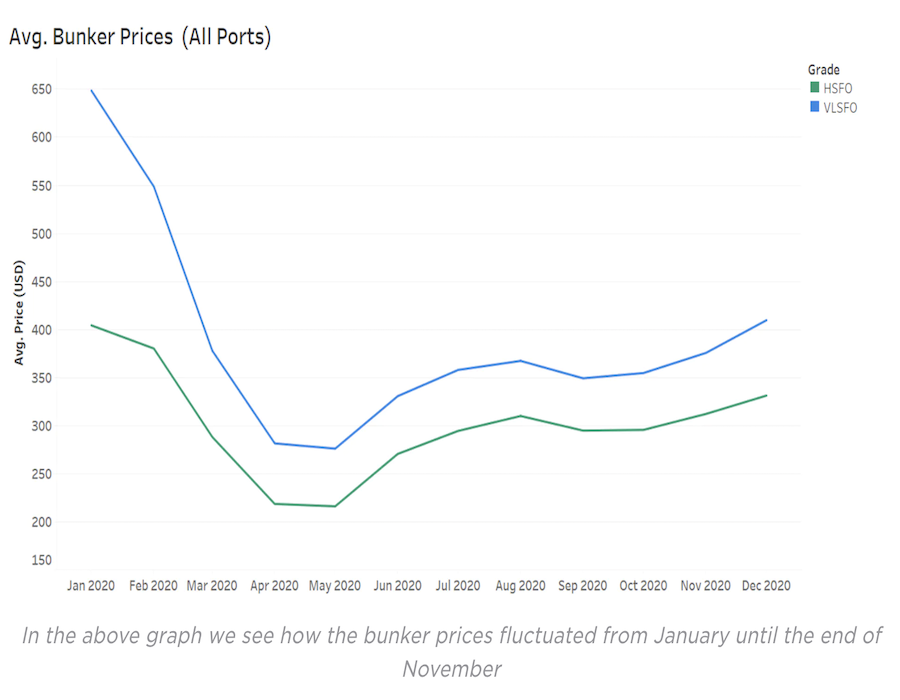 Spot-chartering situational awareness platform, The Signal Ocean Platform on Tuesday (29 December) published its perspective on how the tempestuous events of 2020 have affected the commercial shipping industry. The following is the article’s section on bunker prices:

There is no doubt that 2020 has been a turbulent year for commercial shipping. The coronavirus pandemic has shaken the global maritime transport. The pandemic waves have disrupted supply chains and cargo flows across the world. Global oil demand was severely hit.

Tensions and disagreements regarding oil production between the Organization of the Petroleum Exporting Countries (OPEC) and its allies such as Russia (known as OPEC+) exacerbated the oil supply-demand imbalance.

All of a sudden, the world was flooded with oil and was running out of place to put it leading to a spike in demand for tankers that served as floating storage. While this sparked some good news for the tanker market, when the floating storage boom ended, the freight rates plummeted.

The year started with the IMO 2020 regulation kicking in, one of the most significant changes in the tanker industry in recent years. Beginning January 2020 vessels are required to either utilize low sulfur marine bunker fuel such as VLSFO or use the cheaper bunker fuel alternative, HSFO, only if they are equipped with scrubbers. As a result, VLSFO prices were expected to soar and scrubber fitted vessels to benefit from bunker savings. And then, coronavirus happened.

As the first wave of the pandemic started its ripple effect early in 2020, the industry experienced a substantial fall in bunker prices. Compared to the start of the year, fuel prices dropped during the first five months of the year going from $400/mt to $276/mt for HSFO and from $648/mt to $216/mt for VLSFO. At the beginning of the year, the average spread between VLSFO and HSFO was at $248. At the end of November, the spread between the two fuel types had been reduced to $60.

The drop in marine fuel prices benefited some and damaged others. For some industry players including shipowners and charterers, the drop in VLSFO prices has surely been comforting. For others, however, such as bunker suppliers, the decrease in fuel price increased pressure. The price drop did not additionally favor the shipowners who invested in scrubbers in order to comply with the IMO 2020 regulation as this development will likely delay their return on their investment. Things started moving northwards during the second half of the year, where bunker fuel prices saw an uptick through the end of November but have remained low compared to the start of the year.

14 other crew members on board the same ship were later confirmed to have COVID-19, and all 15 members were transferred ashore to a hospital, reports MOH.

With COVID-19 infections escalating, stringent measures have been put in place; short-term visitors from affected areas not allowed to enter or transit through Singapore.