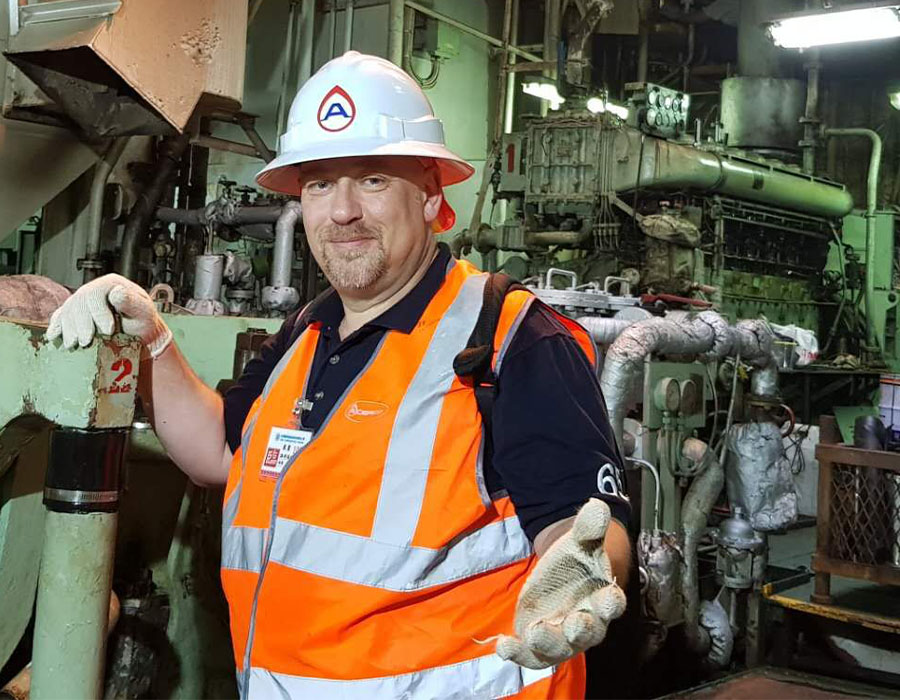 “One of the ways to comply with the International Maritime Organization (IMO)’s regulation for greenhouse gas (GHG) reduction is through the use of biofuel or biofuel blends as a marine fuel,” says Philippe Lecloux, Aderco Group Head of Marine.

“There are different types of biofuels, each with its own set of benefits and drawbacks in terms of stability, acidity and microbial growth.”

Properties of biofuel may have an impact on the materials used and how they are stored, according to Lecloux.

The higher acid levels in biofuels have a greater potential to induce corrosion in fuel supply systems if allowed to oxidise.

Biodiesel, in particular, is more sensitive to oxidative breakdown than VLSFO due to its higher organic chemical content.

He notes Aderco 2055G having the ability to delay the appearance of volatile by-products and hence, increase the time period before biofuel starts to oxidise.

Under laboratory studies, Aderco 2055G was dosed in three palm-based biofuels with varying levels of blend percentage. In all three samples, oxidation delay increased with the use of the additive. (Results below) 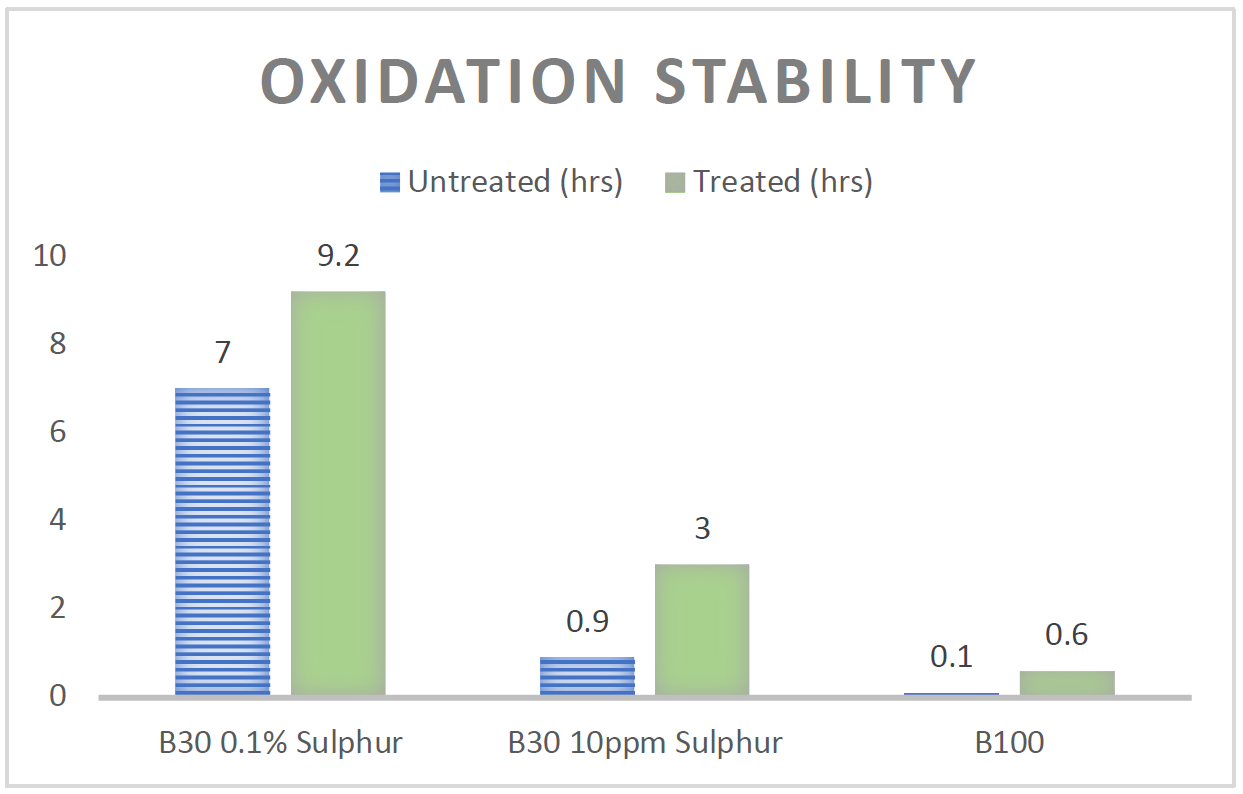 In a second test, three B100 fuels were tested for rancimat. In the case of B100 Biofuga and B100 Verbio, the induction time of biodiesel almost double in the presence of 2055G. (Results below) 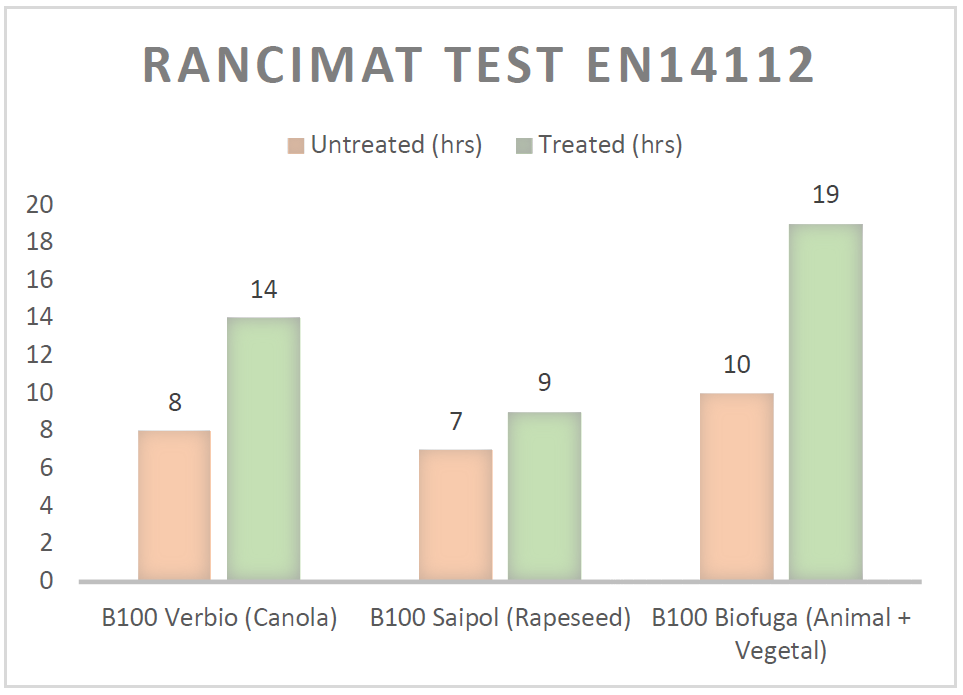 ACIDITY DUE TO OXIDISATION

Once oxidative elements are present in biofuel, the fuel blend starts to become acidic which can increase in intensity if the fuel is left untreated – leading to corrosion in the storage tank and damage to the fuel system, informs Lecloux.

“In advanced stages, this could lead to increased fuel acidity, which could result in corrosion in the fuel system and accumulation of deposits in pumps and injectors,” he shares.

“Some types of hoses and gaskets could degrade, leading to loss of integrity and interaction with some metallic material such as copper, brass, and lead among others.” In general, test results (above) showed the pH of all three samples decreasing slightly with the water content remaining stable during the test period of 31 days.

“Bacteria and mould can form in biodiesel fuel when being exposed to condensed water [found within storage tanks] and microbial proliferation results in excessive sludge development, blocked filters, and clogged pipes,” he notes.

Analysis measuring Colony Forming Units (UFCs) showed the effectiveness of Aderco 2055G in inhibiting the development of the colonies. In summary, studies (above) showed:

“Aderco 2055G forms a selectively permeable barrier between water and fuel and only allows water to pass through and settle at the bottom of the tank,” explains Lecloux.

“The creation of the barrier prevents microbes and bacteria from reaching and contaminating the fuel. Careful and regular draining of water facilitates the removal of these organisms.”

Note: All tests were conducted by independent laboratories with guidance from Aderco. Complete test documentation and case studies can be requested from Aderco’s Technical Department ([email protected]).

Philippe Lecloux, Aderco Group Head of Marine, began his career at sea in 1984 and served 17 years as Chief Engineer on board complex oil and chemical carriers owned, operated and managed by blue-chip European players. He is a graduate of the Antwerp Marine Academy (Belgium).

He later moved to Singapore as Technical Director where he developed and successfully headed a new ship management division and various other projects. In 2013, the prestigious Lloyd’s List Asia Awards rewarded his team in the Training category.

Since January 2017, Philippe has been spearheading the Aderco Group’s development in the dynamic Asia/Pacific/Oceania markets.

GARD: The EU Emission Trading System - are you ready?

Since the EU ETS has been agreed, vessel owners and charterers that may trade within the EU should ensure they are prepared to comply with its requirements in 2024.