Take your own bunker samples – they are a vital piece of evidence, advises Gard 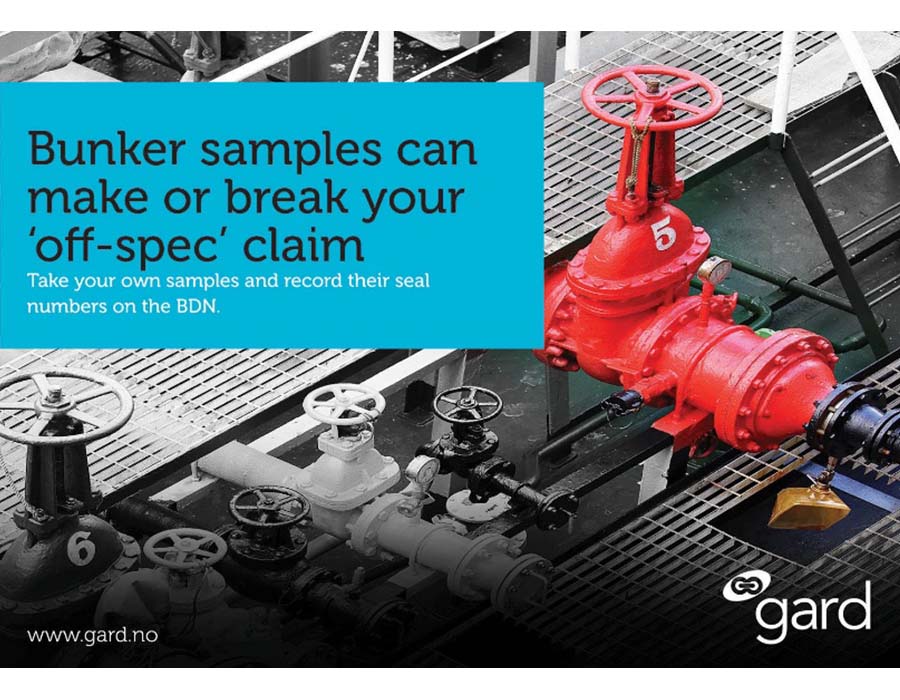 Protection & Indemnity insurer Gard on Thursday (13 May) published advice regarding the collection of bunker samples to the shipping industry:

Bunker quality disputes are not uncommon. The parties often agree to jointly test a sample to determine if the fuel supplied was on-specification or not, and the result is binding on the parties. Even in the absence of an agreement, bunker samples will be relevant evidence that may help to resolve a dispute one way or another. The question then arises: which samples will be used for testing – the one taken on the bunker barge or the one from the receiving ship’s manifold?

An owner wishing to use a manifold sample may discover that either no such samples were taken or that if they were taken the seal numbers were not mentioned on the Bunker Delivery Note, which allows their validity to be disputed.

A bunker supplier will probably want to take samples from the barge whereas a shipowner would generally prefer for the bunkers to be sampled from the receiving ship’s manifold as there may be concerns about the barge samples not being representative. Gard has handled cases where the barge samples have failed the test for finger printing, i.e. they were not representative of the fuel actually bunkered.  Moreover, due to local restrictions imposed in many ports following the Covid-19 outbreak, the problem has been exacerbated as bunker suppliers are even more insistent that the samples be taken from the barge as they are unable to witness the sampling process on the receiving vessel. A time charterer may also prefer to avoid agreeing to use receiving ship’s samples, because of the difficulty persuading bunker suppliers to use them.

The commercial relevance of samples being recorded in a BDN is that there is a clear and joint record of what was taken, if not necessarily from where, and the underlying contracts may well restrict relevant samples to those so recorded.

There are no IMO regulations which mandate that seal numbers must be inserted in the BDN. There are recommendations contained in MEPC.182(59) and MEPC.1/Circ.875/Add.1. However, MEPC.182(59) refers only to MARPOL samples and states “to facilitate cross-reference details of the seal, identification may also be recorded on the bunker delivery note”, whereas latter caters to all samples and is more strongly worded and states “details of the sample seals should be recorded on the bunker delivery note”.

The IMO has published a guidance document on best practice to be followed by suppliers. It states that the samples are to be taken at the receiving ship’s manifold. In addition, there is also ISO Standard 13739 but there are different versions of it with different requirements on the sampling point. Which version applies will depend on the version of ISO 8217 standard being used:

Foreign vessels entering Taiwanese ports to use 0.5% sulphur fuel or other compliant fuel from 1 January 2019.