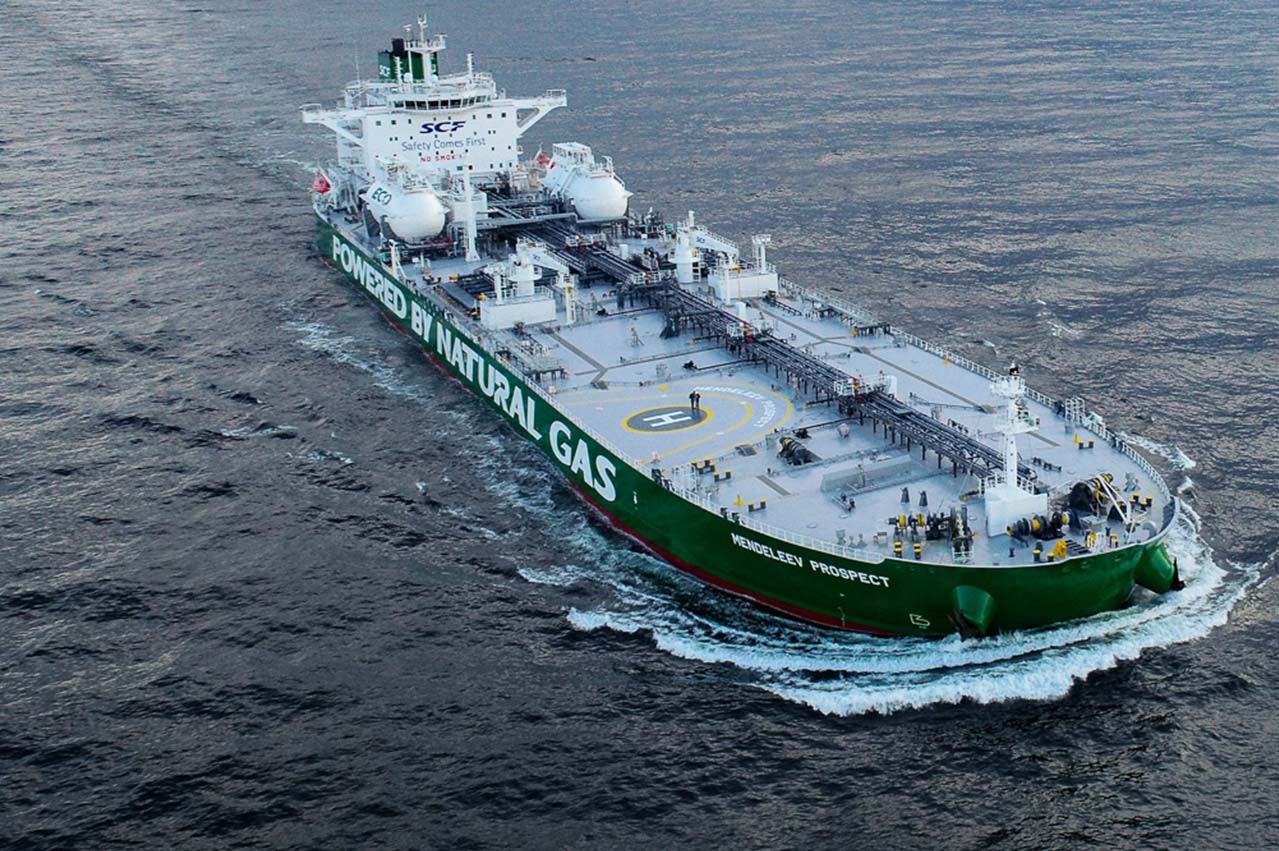 Both vessels, bound for China with a cargo of crude oil from the Port of Primorsk, have crossed the full length of the NSR using only cleaner-burning fuel. With favourable ice conditions along the entire route and precise route planning, both vessels travelled the entire length of the NSR without icebreaker escort.

“It is gratifying to emphasise that there is an ongoing demand for cargo transit along the Northern Sea Route during the period of summer navigation. Using LNG fuel allows for a significant reduction of the tanker’s emission footprint, which is critical given the fragility of Arctic ecosystem,” noted Igor Tonkovidov, CEO of Sovcomflot.

“The transit voyage from Cape Zhelaniya to Cape Dezhnev went smoothly. While in passage along the high-latitude route, the tanker ran exclusively on LNG. The tanker fuel system and other components have proved to be highly reliable,” said Mark Lyudnik, the Master of Mendeleev Prospect.

“I would also like to highlight the exceptional training and skills of the crew. Special thanks to Sovcomflot onshore personnel who provided all the necessary navigation data and other information to the tanker crew and ensured its safe voyage while running on LNG.”

Sovcomflot is introducing LNG as a fuel for large-capacity cargo shipping in the Arctic. In October 2018, Lomonosov Prospect crossed the NSR westbound, successfully testing the operation of the ship engines and controls of the fuel systems using LNG during the voyage.

In 2019, Sovcomflot had three of his LNG-fuelled tankers cross the NSR eastbound (Korolev Prospect in September 2019, Lomonosov Prospect and Mendeleev Prospect in October 2019), and one such tanker westbound.

Currently, Sovcomflot has six LNG-fuelled oil tankers in operation, all delivered in 2018-2019. The lead ship of the series is Gagarin Prospect. Each 113,000-dwt tanker is assigned an ice class of 1A/1B, with a length of 250 metres and a breadth of 44 metres.

HL Eco and HL Green are two 180,000 dwt mineral carriers that will transport two million tonnes of iron ore and coal a year between South Korea and Australia.

Construction is estimated to be completed within the 2020 fiscal year and is designed to meet NOx tier III requirements in diesel mode, offering flexibility for fuel choices.

The 20,000 cbm Avenir Allegiance due for delivery in Q3 2021 will be Cayman Island flagged and is the 4th of 6 newbuilds delivered to Avenir LNG.