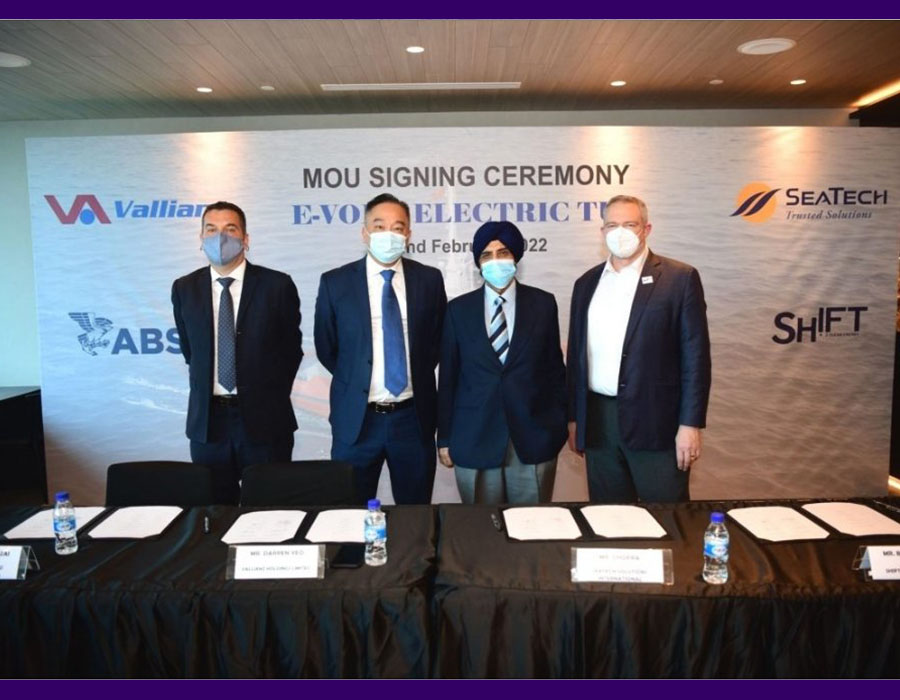 The alliance combines their respective technical expertise and engineering capabilities for the construction of an all-electric, zero carbon emissions harbour tug (e-tug) – the first of its kind in the Asia Pacific region.

To mark this collaboration and commencement of the e-tug’s construction, representatives from Vallianz, SeaTech, Shift and ABS attended a signing ceremony held today at Vallianz’s headquarters in Singapore, in conjunction with a livestream of the steel-cutting ceremony at Vallianz’s shipyard, Vallianz PT USP,in Batam, Indonesia.

The construction of the e-tug will be carried out at Vallianz PT USP.

Based on the “E-Volt Electric Tug” design by SeaTech, the e-tug will be driven by a fully-classed electric battery system provided by Canadian-based Shift.

This follows a recent memorandum of understanding between Vallianz and Shift to collaborate on vessels that require electrification solutions.

Measuring an overall length of about 24 meters, the e-tug will be powered fully by battery and equipped with azimuth propulsion. It will have a bollard pull in excess of 60 tonnes with service speed of over 12 knots.

A key feature of this project is the addition of a value-added onshore charging infrastructure which allows any client to seamlessly integrate this vessel into their existing port operations. The digitisation platform installed on the e-tug – from its battery management system to auxiliary equipment systems – will enable the end-user to remotely monitor and optimize the vessel’s operational efficiency.

Darren Yeo, Executive Vice Chairman of Vallianz, said that the strategic collaboration with Seatech, ABS and Shift is a major milestone in the development of the Group’s business.

“This e-tug project with our partners will enhance the Group’s technical know-how and engineering expertise to embark on the construction of environmentally-friendly vessels. It is in line with Vallianz’s sustainability efforts and puts us at the forefront of the global marine industry’s trend towards sustainability and decarbonisation.

As the first of its kind in Asia Pacific, the e-tug will yield environmental and economic benefits to the end users, industry and community at large, in achieving their zero-emission environmental targets. The operational e-tug will reduce at least 150 tons of nitrogen oxide (NOx) and 2,000 tons of carbon dioxide (CO2) emissions annually versus a conventional tug. This is equivalent to removing 500 typical passenger vehicles from the road.” he said.

Brent Perry, CEO of Shift Clean Energy, said they shared the other companies’ commitment to decarbonising the marine and port industries.

“Electrification of vessels like these is an option because of our safe marine batteries, which we develop to exceed all regulations in place now, and those that would be anticipated even over the next 30 years,” he said.

Govinder Singh Chopra, Director of SeaTech, explained that the E-Volt Tug is their customised and cost-effective electric solution for harbour tugs to reduce emissions within the ports around the world.

“We at SeaTech are delighted to be part of this milestone in line with SeaTech’s vision of a decarbonised Maritime 4.0,” he said.

Pier Carazzai, ABS Vice President of Pacific Regional Business Development, said ABS was proud to be able to use its extensive experience with hybrid electric systems to support the decarbonisation of the industry, a goal which this innovative project brings a key step closer to achieving.

The construction of the e-tug is not expected to have any material impact on the net tangible assets or earnings per share of the Group for the current financial year ending 31 March 2022.

Ernst & Young schedules meeting on 18 July, 2018 to update stakeholders on progress of liquidation.