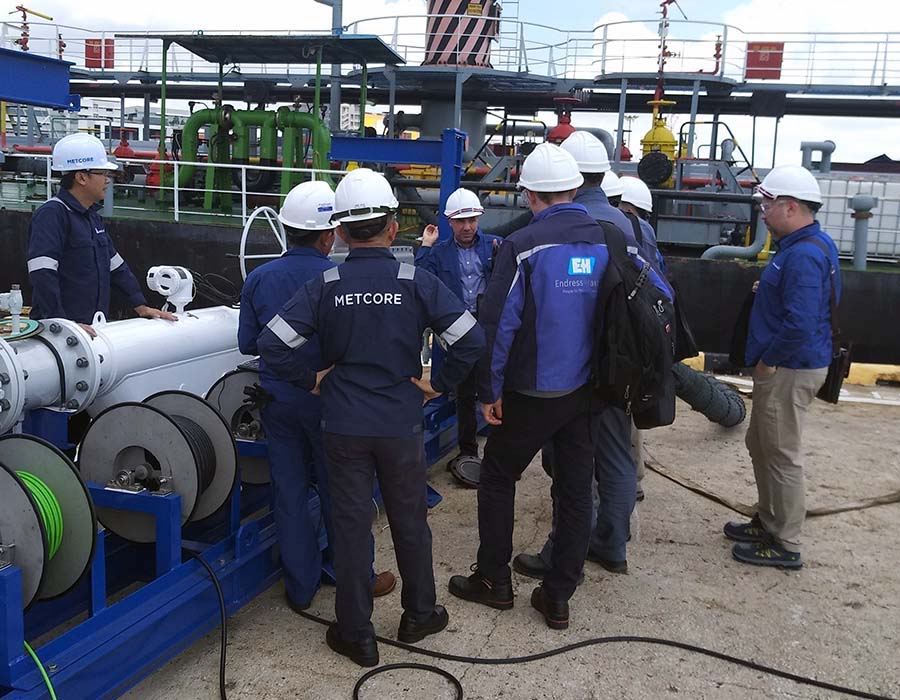 The internal test of an Endress+Hauser Coriolis master meter which will be used by the Singapore bunkering industry for future verification/proving of its mass flow meters (MFMs) was being conducted at Jurong Port on Wednesday (5 February).

The master meter was utilised to carry out a performance verification test of the MFM unit installed on board Singapore bunker tanker Kantek 2.

The flow test, designed to identify and address the potential drift of MFM units, will reinforce the traceability and integrity of such systems used by Singapore’s MFM-equipped bunker tankers for fuel custody transfer.

Several delegates from Russia including representatives from PJSC Lukoil who came to the Republic to learn about the use of MFMs for bunkering and in particular, its MFM verification maintenance programme, witnessed the trial, learned Manifold Times.

The importance of MFM verification

Sergey Tyubekin and Andrey Kurochkin, both Chiefs at the Department of Metrology and Standardization of PJSC Lukoil, respectively overseeing the oil major’s downstream and upstream operations explained the importance of MFM verification to the Singapore bunkering publication.

“MFMs can be used by both supplier and buyer for the custody transfer of oil products, including marine fuel,” said Tyubekin and Kurochkin in a joint statement.

“Meter Verification or Meter Proving is a recurring periodical confirmation of the measuring instrument’s [MFM] compliance with its established requirements, including accuracy indicators.

“With reduced measurement errors, information related to the product’s parameters is more reliable from a custody transfer point of view.”

In reality, determining the true value during measurements is more complex due to external operating conditions.

“Environmental conditions such as precipitation and ambient temperature, process/product conditions and/or construction design features such as wear out of certain parts, and more, can lead to increased measurement uncertainty during operation,” both explained.

“Meter Verification or Meter Proving of MFMs allow these systematic errors to be detected and eliminated or reduced to acceptable values.”

Depending on the company’s practices, MFMs being used for the transfer custody of oil products in Russia are returned to their respective re-calibration facilities at a frequency of between once a year to once every four years.

For example, the Lukoil company conducts additional Monitoring of Metrological Characteristics (MMCh) for its custody transfer MFMs once a quarter under different weather conditions (winter, spring, summer, autumn) in accordance to internal regulations.

“Such large interval between proving operations (confirmation of conformity) indicates the stability of the Coriolis measurement method and the trust in its measurement,” they stated.

“In my opinion, the mass flow master meter has some advantages over the piston prover due to its smaller dimensions. Therefore, it is easier to move between objects of verification,” they said.

“The verification process using MFM master meters are also faster, the units are cheaper to acquire when compared to piston provers, and the technology offers the possibility to compensate for viscosity effect.

“At the same time, using an MFM master meter allows proving under real operating conditions and the real oil product. Coriolis-based MFMs also encounter minimal wear and tear due to the lack of mechanical moving parts when compared with the piston prover.”

Sherman Lee, Marketing, Sentek Marine & Trading Pte Ltd, believes the master meter will be a “game changer” for the Singapore bunkering sector when officially introduced as it shortens the time and reduces resources required for bunker MFM verification.

“This represents quite a significant amount of cost saavings for operators in maintaining the system,” notes Lee, whose company owns the Kantek 2.

“With a master meter, the setup and completion in the verification of the duty meter [MFM installed on the barge used for custody measurement] should be done in less than a day and only involving one bunker tanker.

“Arguably, the most important aspect of this operation is the ability to trace the meter’s performance in meeting international metrology standards as differences in any MFM measurements will cost the company commercial losses.”

The master meter is scheduled to undergo further tests involving Singapore authorities during the next half of February before being approved for verification operations of duty MFMs installed on board Singapore bunker tankers due for yearly re-validation.

COSCO plans for bonded LSFO supply base at Zhoushan