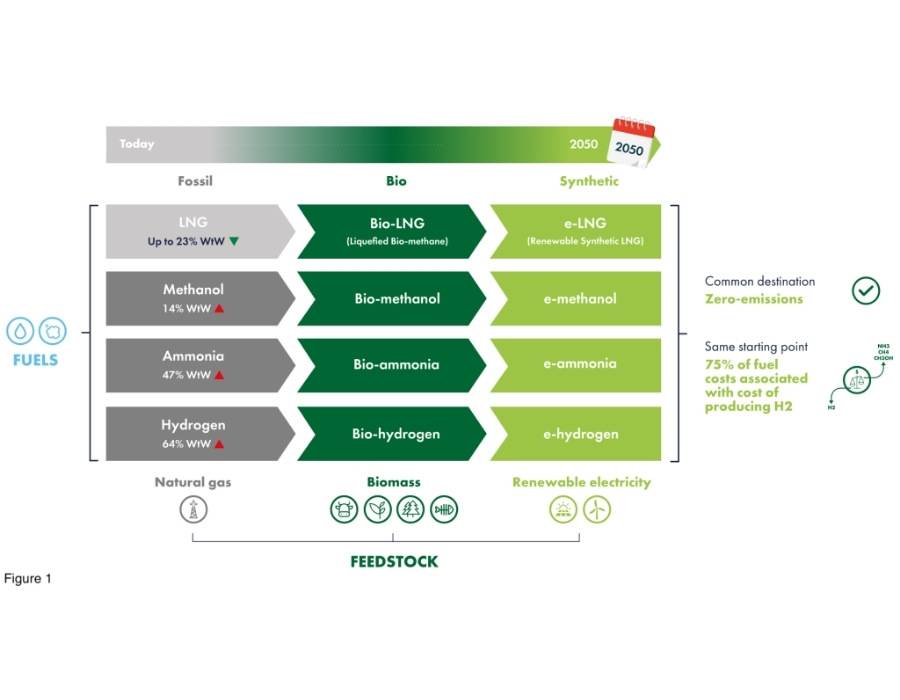 The industry is making newbuild investment decisions now that will impact greenhouse gas emissions today and for the next 25-30 years, the typical lifetime of a vessel. It is essential their assessments of alternative marine fuel pathways are made on a like-for-like, or “apples with apples” basis. Discussion of alternative fuels too often compares the green versions of ammonia and methanol with fossil, or grey, LNG. The reality is that all fuels share a common pathway from fossil-based versions, produced from natural gas to hydrogen-based, synthetic fuels. These synthetic fuels will only become available as and when sufficient renewable electricity and electrolysis capacity comes online to produce them.

Decarbonisation will not be a “big bang” process where the industry moves in a single step from fossil to zero-emission, renewable fuels. It is likely to take place incrementally as fuels are gradually decarbonised through the addition of low and zero-emission drop-ins.

This transition pathway is illustrated in Figure 1. Almost all alternative fuels today, including LNG, are fossil-based, in fact most are produced from natural gas. LNG is simply natural gas that has been cooled to the point it liquefies. Natural gas, and sometimes coal, is also the feedstock for almost all methanol, ammonia and hydrogen production.

Uniquely, fossil LNG offers significant greenhouse gas emissions reduction when used as a marine fuel compared with VLSFO – up to 23% on a full lifecycle (Well-to-Wake) basis according to an independent study by Sphera . By contrast, the use of fossil methanol, ammonia and (liquid) hydrogen results in emissions far higher than those associated with VLSFO because of the large amounts of energy required for their production.

Emissions can be significantly reduced through the use of fuels derived from sustainable biomass. BioLNG is already commercially available in Europe as a marine bunker fuel today and has penetrated the heavy-duty vehicle road transportation sector in both Europe and North America. Biomethanol also exists in limited quantities, but mainly as an industrial chemical feedstock.

The ultimate, zero-emissions destination for all alternative fuels is for them to be synthesised from hydrogen produced from renewable electricity. Once this renewable hydrogen building block exists at scale it is possible to produce e-LNG, e-methanol, e-ammonia or e-hydrogen. It is important to note that around 70% to 80% of the cost of producing these e-fuels is associated with hydrogen production

We need to consider the pathway, not simply the destination

The implications for the climate and for shipowners can be best understood by looking at an example of investment decision. In Figure 2 we illustrate the case of a 14,000 TEU container vessel coming into operation in 2025, dual-fuelled with a 25-year lifespan and with renewable fuels becoming available at increasing scale from about 2030 onwards. 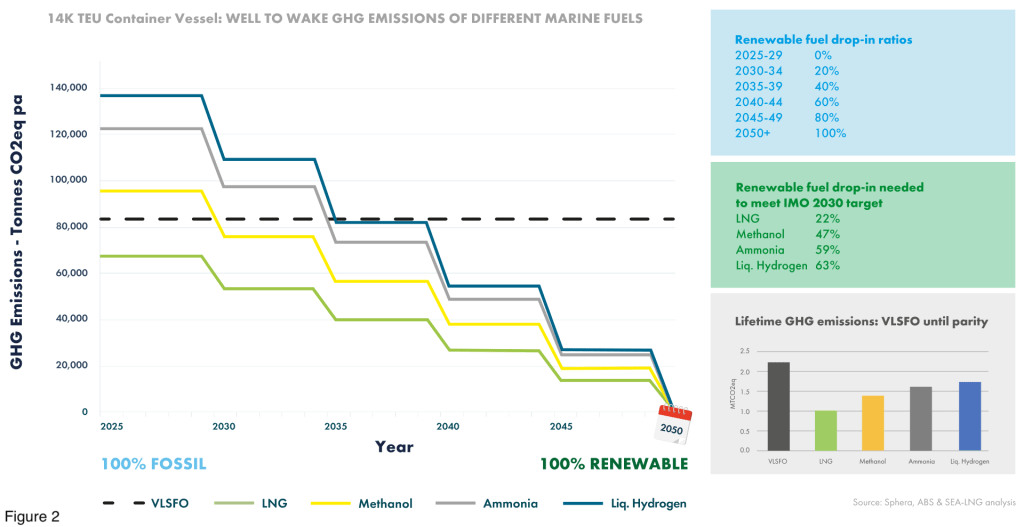 Modelling the emissions over the life of the vessel we can see that LNG offers immediate GHG reductions decreasing to zero-emissions by 2050. The bar chart shows an overall emissions reduction for the LNG pathway of more than 50% over the lifetime of the vessel, compared with VLSFO; for methanol and ammonia the corresponding reductions are 37% and 28%.

If we now look at the methanol and ammonia pathways, they also offer lifetime emissions reductions, but the reductions are smaller – 37% and 28% respectively – as they start from a “worse” place. Fossil methanol emissions are 14% higher than VLSFO on a full lifecycle basis; for ammonia the corresponding number is 47%. This is likely to mean owners and operators choosing methanol and ammonia pathways will be forced to continue using VLSFO, postponing emissions reduction for several years.

For methanol and ammonia to achieve emissions parity with LNG they will require blends of approximately 30% renewable methanol and 50% renewable ammonia immediately. The fossil versions of methanol and ammonia are already significantly more expensive than LNG and the renewable versions are likely to cost multiples more than their fossil equivalents. This will make the starting points for these pathways considerably more expensive than beginning with LNG. Note, this ignores any indirect costs associated with creating new bunkering infrastructure, which will be necessary for e-methanol, e-ammonia and e-hydrogen.

Waiting is not an option

In summary, committing to solutions which rely on alternative fuels which will not be available at commercial scale in a renewable form for the foreseeable future, means owners locking in higher emissions and higher cost decarbonisation pathways. LNG as a marine fuel delivers immediate GHG benefits and a lower risk, lower cost, incremental pathway to zero emissions.

Steve Esau, Chief Operating Officer, SEA-LNG said: “When looking at the advantages and disadvantages of alternative fuels, we should be assessing the characteristics of each fuel type on a like-for-like basis. Greenhouse gases in the atmosphere are a stock problem as well as a flow problem. The industry needs to consider the pathway to decarbonisation, not just the destination. Waiting is not an option.

“The consequences of delaying the shift away from fuel oils, which will cause faster rising cumulative emissions, meaning the challenge to reduce atmospheric greenhouse gases will be harder. Shipping needs to assess fuel pathways based on how they can deliver decarbonisation benefits now, and in the future, and also the likely cost to society of these pathways”.

Singapore celebrates ‘Day of the Seafarer 2019’ to thank seafarers

Nguyen will focus on Vietnam as well as Southeast Asia markets due to his strong relationship with suppliers and customers in Vietnam, said firm.

European shipowners welcome the Fit for 55 climate package but fear lack of consistency among proposals may undermine increased climate ambition.

Contract of 10 mt is settled through physical delivery - a first in Singapore - and is expected to bring increased convenience to the fuel oil market, it says.