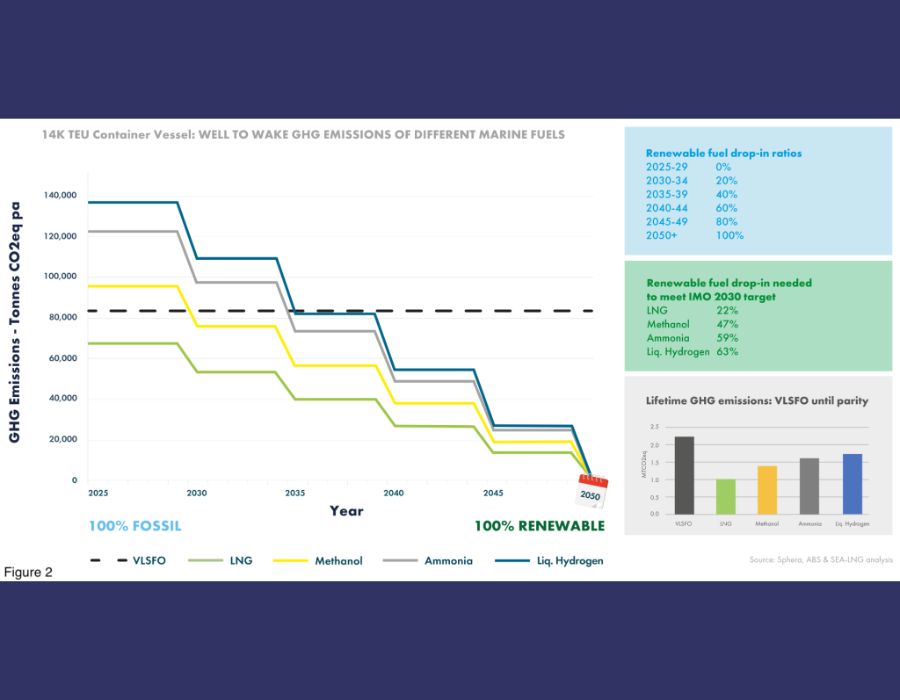 In setting out a framework for their analysis the authors make innumerable contestable and unsupported statements.

Somewhat confusingly, given the focus of their paper on stranded value risk, they ignore the fact that LNG dual fuel engines already provide ship owners with an insurance against stranded assets, as they can burn traditional marine fuels and are currently doing so in Europe as a consequence of the unprecedented spike in LNG prices.

Further, their analysis is based on an assumption that the decarbonisation pathway offered by LNG via bioLNG in the medium term to synthetic, or e-LNG, in the long term, will be less “competitive” than ammonia or other electro- fuels. This is highly problematic for a number of reasons. Predicting the future production costs of electro-fuels such as e-ammonia, e-methanol and e-LNG is extremely difficult given that 80% of the cost of producing these fuels is associated with the cost of producing the common renewable hydrogen feedstock. This can only be produced from renewable energy sources which will take years to develop to the necessary scale. Suggesting a particular electro-fuel will ‘win’ based on price, is reckless and is, at best, a guess at this point in time.

Ammonia is a highly toxic fuel, with a volumetric energy density, approximately 50% that of LNG. This means more toxic fuel and less cargo. Regulatory agencies around the world will need to work to counter the dangers of ammonia to protect seafarers as well as port workers and port communities.

Ammonia-fuelled engines are in the very early stages of development with massive uncertainties on issues such as pilot fuel requirements, GHG and NOx emissions and potentially deadly ammonia slip. Addressing these issues will demand significant amounts of time and money. Finally, massive infrastructure investments will be required to produce and deliver e-ammonia (and indeed other fuels such as e-methanol and e-liquid hydrogen) to the ships that may use it. Contrast this to the LNG pathway where the transportation and storage infrastructure already exists and is growing globally.

The results reported in this study are meaningless as they are based on subjective, negative assumptions on LNG. Such flawed analysis can confuse the industry, potentially providing ship owners and investors with justification to sit back, wait and continue to emit GHGs rather than invest in a technology like LNG that offers immediate GHG reductions today together with a clear and competitive pathway to decarbonisation in the decades ahead. Waiting is not an option.

Bunker One bolsters fuel delivery operations in US Gulf, Caribbean and West Africa

‘The current downtrend in the market is not affecting our entrepreneurial spirit, and we continue to execute on our strategy for growth,’ says CEO.