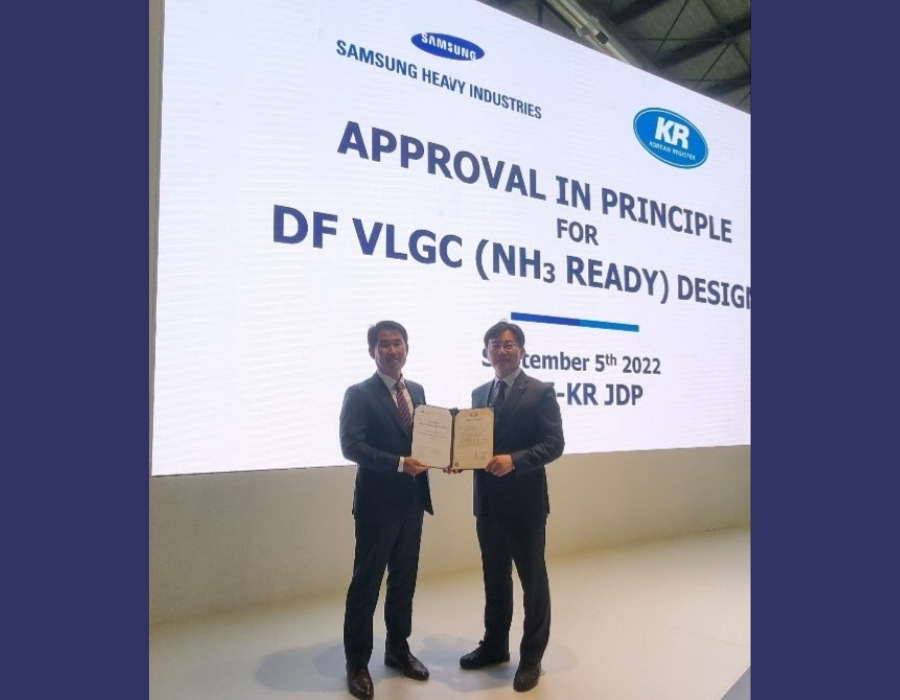 Classification society Korean Register (KR) on Tuesday (6 September) said it has granted an Approval in Principle (AiP) to Samsung Heavy Industries’ (SHI) for the design of a new ammonia-fuel ready vessel on 5 September.

The Very Large Gas Carrier (VLGC) will be capable of using ammonia as a fuel as well as carrying it as bulk cargo. Jointly developed by Samsung Heavy Industries (SHI) and KR, the new design represents a significant step forward in the expansion of an international supply chain for the clean fuel.

The SHI design maintains the actual yield stress of the ammonia tank steel below KR’s Rule requirements and is able to maintain a temperature close to boiling point.

Announcing the approval of the new design at Gastech 2022 in Milan, Kyu-jin Yeon, Head of KR’s Plan Approval Center, said: “We are committed to supporting the responsible use of ammonia in a sustainable energy economy: ammonia is an important green energy source and is expected to account for a significant proportion of future ship fuel demand.”

“However, whilst the shipping industry has significant experience of carrying ammonia as a bulk cargo, using it as a fuel brings new challenges and fuel systems must be designed, manufactured, operated and maintained in a way which ensures the safety of the ship crews, port staff and fuel suppliers. KR will continue to co-operate with SHI to develop further green technologies and become a leader in this field.”

Young-kyu Ahn, Head of SHI’s Shipbuilding Sales Engineering Team, said: “Ammonia fuel propulsion vessels are one of the best ways of meeting the IMO’s carbon neutral targets, and we plan to commercialize them with differentiated technology. Moreover, our Research Institute is spurring the development of green technologies such as carbon reduction and hydrogen transport technology.”

The new design is the largest ammonia-ready vessel to have been approved by KR. The classification society also recently approved designs for a 60,000m3 ammonia-fueled ammonia carrier and a 38,000m3 ammonia carrier/bunkering vessel. KR is further supporting the development of ammonia-related technologies by developing its guidance for ammonia-fueled ships, and its participation in the Green Ammonia Marine Transport and Bunkering Consortium.

Lead time was less important pre-IMO 2020, but prudent planning is essential now due to relatively tight HSFO and risks associated with different length of lead times.