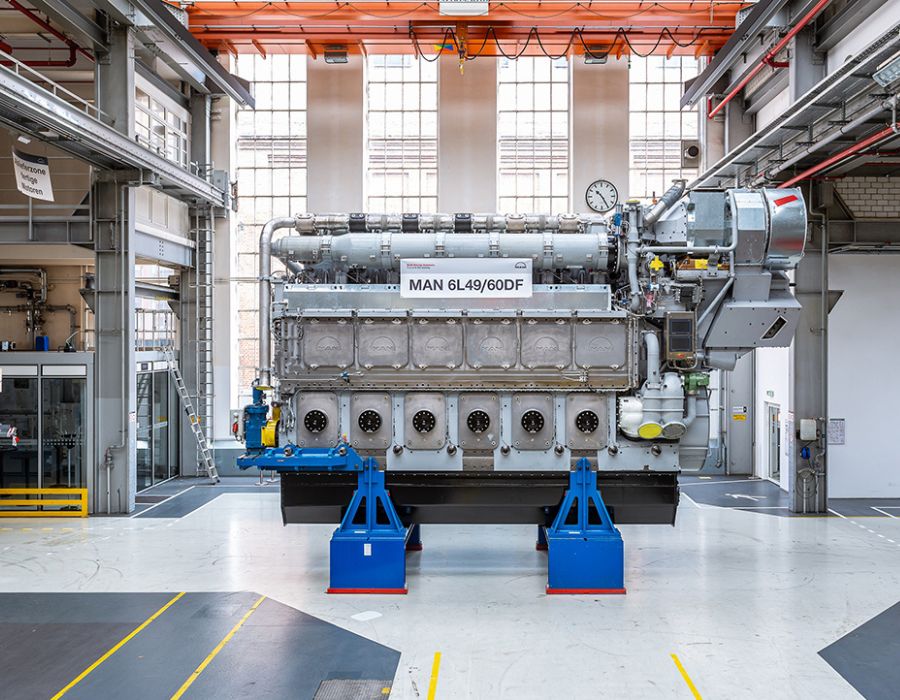 MAN Energy Solutions on Friday (2 September) announced the launch of its MAN 49/60DF engine type, a dual-fuel engine capable of running on LNG, diesel and HFO as well as a number of more sustainable fuels including biofuel blends and synthetic natural gas.

The latest addition to its four-stroke engine portfolio was announced at the SMM trade fair in Hamburg.

MAN Energy Solutions stated that it sets a benchmark in terms of fuel efficiency within four-stroke engines – both in gas and diesel modes – and therefore minimises fuel costs.

Wayne Jones OBE, Member of the Executive Board – Global Sales & After Sales – MAN Energy Solutions, said: “Dual-fuel engines are the ticket to the maritime energy transition. As we enter a new era of decarbonisation, the 49/60DF is a great, new choice for vessel owners that have ambitious, emission-reduction targets on their agenda. In essence, it offers full fuel-flexibility to operators who can then choose from the various decarbonisation paths that open up as new fuels make their way into the marine industry.”

Marita Krems, Head of Four-Stroke Marine & License, MAN Energy Solutions, said: “The MAN 49/60DF is making its debut at a time where – while the number of LNG projects is still growing – alternative fuels like methanol, ammonia and hydrogen are continuing their rise, albeit with none having established market dominance as of yet.”

“Increasingly, it is crucial for new vessels to be driven by engines that provide options for emission compliancy over the vessel’s lifetime. Fuel flexibility and efficiency are the key features. In this respect, the 49/60DF distinguishes itself by offering a number of various emission paths. It also has a level of efficiency that ensures best fuel costs in many applications, especially within the cruise, RoPax, RoRo, dredger, and LNG carrier segments.”

The 49/60DF is already available for order and is based on the new 49/60 engine platform that features MAN’s latest technologies, including two-stage turbocharging, second-generation common-rail fuel injection, SaCoS5000 automation system and MAN’s next generation Adaptive Combustion Control ACC 2.0 that automatically sets combustion to optimum levels.

Soot emissions are halved in diesel mode due to MAN’s new common rail system 2.2, while the 49/60DF’s methane emissions also drastically reduced in gas mode compared to its predecessor. The engine’s benchmark efficiency and fuel-flexible design offers multiple paths to emission compliancy leading up to 2050, as per the current Fuel EU draft.

MAN Energy Solutions plans to introduce a pure diesel engine based on the 49/60 platform in 2023 that will inherently be retrofit-ready for running on methanol and LNG should the demand arise at a later stage.

Note: Details on the MAN 49/60DF engine can be found here.

‘While it is encouraging to see CMA CGM investing in cleaner vessels, the company remains one of the worst climate offenders amongst container ship operators,’ said Kendra Ulrich.

Individuals may be fined not exceeding RM 100,000 or face imprisonment term of not more than two years, or both, under Merchant Shipping Ordinance 1952.

Gazpromneft Marine Bunker to charter LNG bunker tanker for operations in the Baltic Sea, it says.