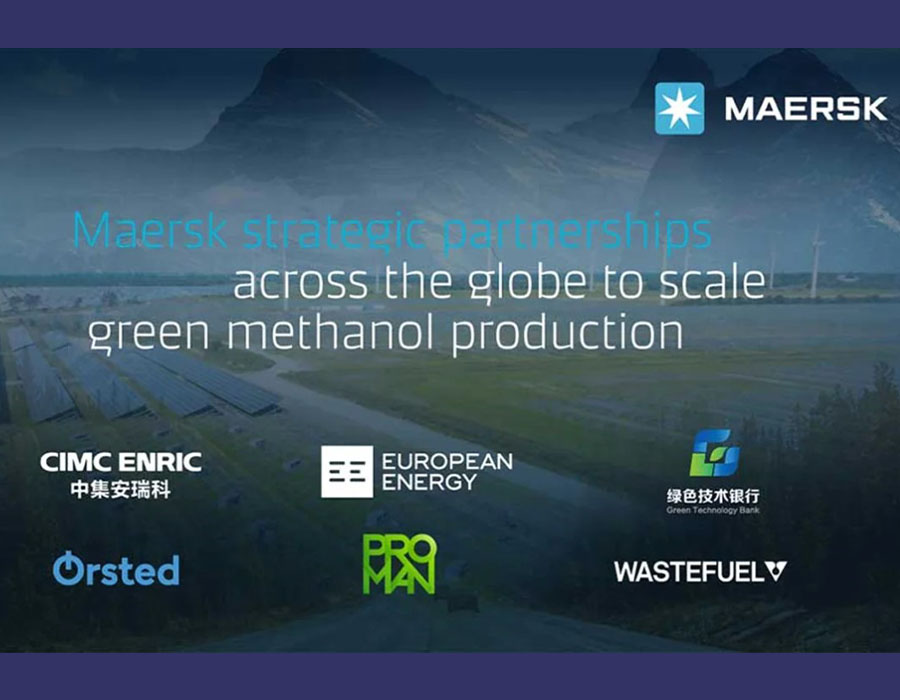 A.P. Moller – Maersk (Maersk) on Thursday (10 March) said is has entered into strategic partnerships with six companies with the intent of sourcing at least 730,000 tonnes/year of green methanol bunker fuel by end of 2025.

With this production capacity, by the end of 2025 at the latest, Maersk will reach well beyond the green methanol needed for the first 12 green container vessels currently on order.

Once fully developed these projects of both bio- and e-methanol will enable Maersk to source green methanol at scale across several regions around the globe.

“To transition towards decarbonisation, we need a significant and timely acceleration in the production of green fuels,” said Henriette Hallberg Thygesen, CEO of Fleet & Strategic Brands, A.P. Moller – Maersk.

“Green methanol is the only market-ready and scalable available solution today for shipping.

“Production must be increased through collaboration across the ecosystem and around the world. That is why these partnerships mark an important milestone to get the transition to green energy underway.” CIMC and Maersk have enjoyed close cooperation for the past two decades. We’re glad that the two parties have identified another area of collaboration. As a leading intelligent manufacturer in clean energy industry, CIMC ENRIC has rich experience and advanced technology in place. We are always committed to making energy cleaner, the environment more sustainable and to creating a better life. Our partnership on green methanol endeavor will not only support Maersk’s journey towards its net zero goal, but also will jointly contribute to a greener and more sustainable future for the shipping industry.

We are very pleased to strengthen our already strong relationship with Maersk with this multi-year partnership where the annual target is to deliver up to 300.000 tons of e-methanol. The shipping industry is a vital part in global efforts to curb carbon emissions, and together with Maersk we are now leading this crucial transition towards running ships 100 percent on renewable energy.

We’re pleased to support Maersk’s pursuit for green energy to achieve sustainable development. We will collaborate with our partners, integrate technical and financial resources to establish facilities in China to produce green methanol for Maersk. We believe this will also contribute to reduce China’s dependence on energy imports such as oil and Liquefied Natural Gas (LNG). The green methanol produced will rely entirely on resources available in China.

The maritime industry faces a chicken-and-egg challenge, where the supply and demand of green fuels will have to evolve in parallel to fast ensure a sustainable development of zero emission fuels. Orsted is very pleased to partner with A.P. Moller – Maersk to address this challenge by scaling green fuel production together with an industry leader in the maritime sector.

Maersk’s industry-leading commitment to green methanol is fully aligned with Proman’s belief that methanol should be a key part of the energy transition. We are excited to bring our deep industry experience to help deliver on Maersk’s bold ambitions, highlighting the viability of methanol as a marine fuel and working together to deliver green methanol and clean shipping at a global scale.

Maersk’s order of 12 ships -each with a 16,000-container capacity- that can be powered with green methanol is an unprecedented act of leadership in the corporate response to the climate emergency. Those ships need fuel and WasteFuel is ready to provide it, steadily increasing volume over the years to come.