China’s bonded bunker fuel exports extended gains in August, on the back of relatively high production combined with a new batch of export quota in the previous month.

China recorded nearly 2.03 million mt of bonded bunker fuel exports in August 2022, surging 19.68% month on month and 20.09% year on year, according to the data from the General Administration of Customs of PRC (GACC).

The leap in the exports came as China released a new batch of quota on LSFO exports in July which encouraged the refiners who ran short of export quota to increase their production to some degree. Despite a month-on-month drop, the country’s LSFO production remained relatively high in August. However, domestic demand was hit by the re-spread of the virus, forcing refiners to expand their bonded bunker fuel exports. 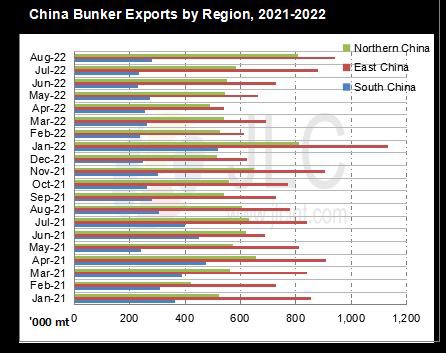 The country imported about 334,900 mt of bonded bunker fuel in August 2022, a dip of 5.02% from the previous month, according to data from the General Administration of Customs of PRC (GACC).

Despite a monthly drop, international bunker fuel prices stayed relatively high in August amid steep freight rates. As a result, buyers gave priority to domestic low-sulfur resources, of which prices continued to sink and were still more competitive than imported ones. In addition, market participants who anticipated further price declines reduced their purchases of imported low-sulfur resources.

On a year-on-year comparison, the imports plunged by 57.24%, GACC data shows. The slump was mainly because of the expansion of LSFO production across the country. Chinese refiners have been accelerating their LSFO production in recent years after China rebated value-added tax on fuel oil supplied to international ships as from February 1, 2020. 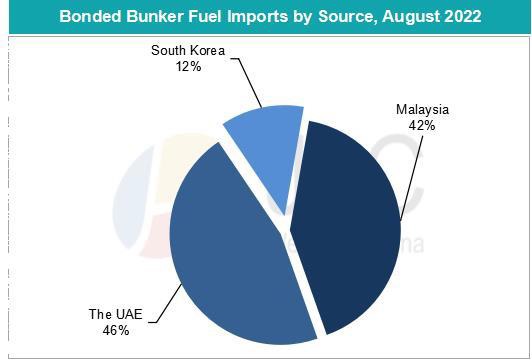 Chinese blenders supplied around 460,000 mt of heavy bunker fuel in September 2022, a modest drop of 20,000 mt or 4.44% from a month earlier, JLC’s data shows. The drop was partly ascribed to a decrease in the supply of low-sulfur asphalt, shale oil, coal-based diesel and light coal tar, which are important blendstocks for heavy bunker fuel. In addition, relatively high costs brought blending margins down, discouraging blenders from supplying heavy bunker fuel. Benders had to cut their prices to promote sales when domestic demand for bunker fuel was sluggish and the delivery was not smooth.

As for light bunker fuel, the supply of domestic marine gas oil (MGO) stabilized at 180,000 mt in the month. Coking margins were still good, but the overall supply did not grow, because refiners preferred to produce diesel rather than bunker fuel amid soaring diesel prices. 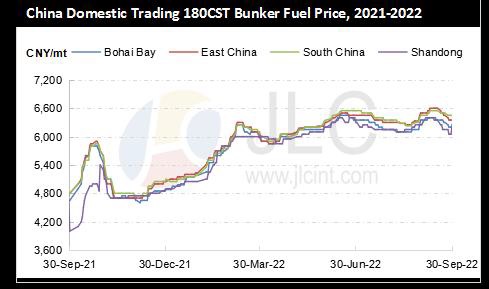 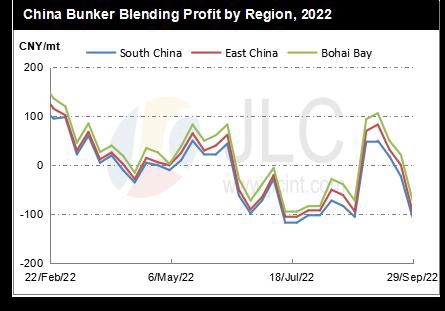 The total value of the vessels is just over $196 million; Clarksons Platou and Arrow Shipbroking Group have been selected to oversee the sale, reports Reuters.

Dr Sunil Kumar of VPS Fujairah writes about the formation and testing of sludge in marine fuels.

Resolution of the diplomatic dispute between the UAE and Qatar earlier this year has so far not resulted in a rise in marine fuels demand in Fujairah.