China’s bonded bunker fuel sales maintained a downtrend in October, as overall demand in the bonded bunker fuel market slackened further due to the continued negative impact of the epidemic.At the same time, some Chinese ports lost their price advantage compared with neighboring ones, as their bonded bunker fuel prices were high amid slightly tight supply.

The country recorded about 1.59 million mt of bonded bunker fuel sales in October 2022, a drop of 4.22%from a month earlier, JLC’s data shows.

Specifically, the sales by Chimbusco and Sinopec Zhoushan slid to 560,000 mt and 650,000 mt, while those by SinoBunker and China ChangJiang Bunker (Sinopec) climbed to 70,000 mt and 50,000 mt respectively. Suppliers with local licenses sold 260,000 mt of bonded bunker fuel in the month.

China’s September bonded bunker fuel exports slipped on month as export margins were not so good, but the exports were still relatively high.

The country tallied about 2.01 million mt of bonded bunker fuel exports in September, slightly down by 0.95%from the previous month, according to the data from General Administration of Customs of PRC (GACC). The dip was mainly attributed to a further monthly decline in LSFO production. Chinese refiners were less keen to produce LSFO in the month, as China had released a large quota on oil product exports and diesel export margins appeared to be more considerable compared with LSFO. The country’s LSFO output (of Chinese refiners with export quotas) totaled about 1.24 million mt in September, down by 8.01%month on month, JLC’s data shows.

On a year-on-year comparison, however, the exports skyrocketed by 29.89%, GACC data shows. Underlying the jump was much larger output of LSFO and the release of this year’s fourth and fifth batches of quota on LSFO exports in September. 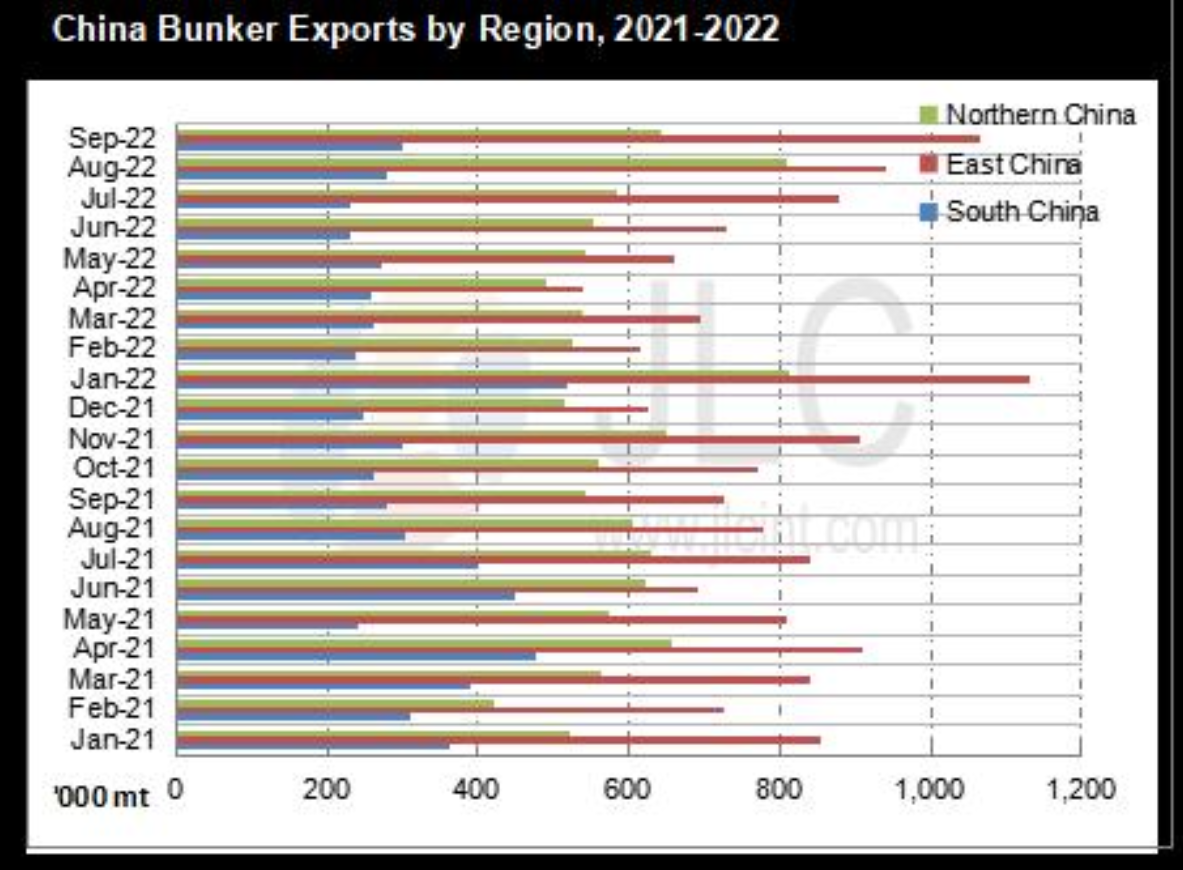 Domestic-trade heavy bunker fuel demand shrank in October, a traditionally strong month, mainly because of a new wave of epidemic outbreaks across China.

The demand for heavy bunker fuel settled at 390,000 mt in the month, a decline of 30,000 mt or 7.14%fromSeptember, JLC’s data indicates. Downstream buyers showed resistance to relatively high bunker fuel prices when the negative effects of the epidemic persisted.

Light bunker fuel demand contracted in October as well, as prices of marine gas oil (MGO) remained relatively lofty and buyers still based purchases on rigid demand to avoid the risk of prices falling back. Demand for light bunker fuel slipped to 145,000 mt in the month, down by 5,000 mt or 3.33% month on month, JLC’s data shows.

The country imported about 427,900 mt of bonded bunker fuel in September 2022, a significant rally of 27.77% month on month, according to data from the General Administration of Customs of PRC (GACC).

Chinese refiners cut LSFO production in the month because it became less profitable for them to produce or export LSFO. The country’s LSFO output (of Chinese refiners with export quotas) totaled about 1.24 million mt in September, down by 8.01% month on month, JLC’s data shows. Although imported low-sulfur resources still lacked price advantages, market participants expanded their imports given the decline in the supply of homemade resources.

The UAE still topped all suppliers by exporting 278,000 mt of bonded bunker fuel to China in the month, accounting for 65% of China’s total bonded bunker fuel imports. The imports from Singapore and SouthKorea amounted to 79,500 mt and 61,400 mt, occupying 19% and 14% of the total respectively. Malaysia dropped to the fourth position, with imports from the country making up 2%.

On a year-on-year comparison, the imports slumped by 25.94% in September, mainly as a result of a yearly surge in domestic LSFO output. 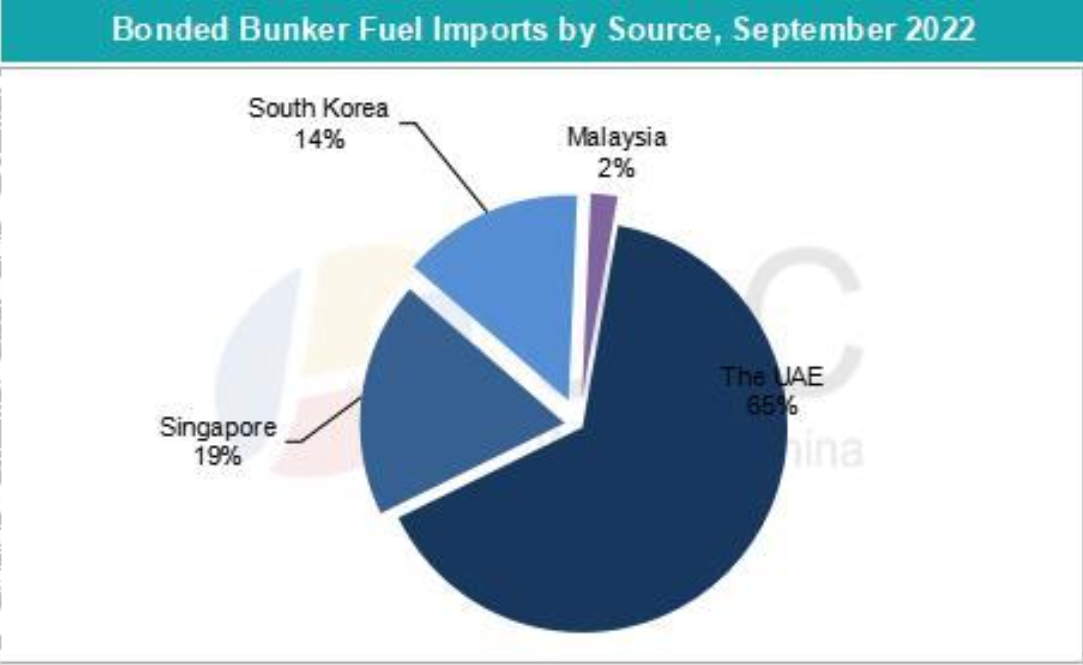 Coking margins remained fair but resources flowing into the bunker field were limited as refiners still gave priority to diesel of which prices stayed steep. The supply of domestic marine gas oil (MGO) slipped to 170,000 mt in October, down by 10,000 mt or 5.56% from September, the data shows. ‘Winning the Enterprise 50 award for the 5th year in a row has been such an incredible achievement for our team here at Sing Fuels,’ says CEO.

Provides USD 50 million guarantee to TFG Marine in connection with the performance of subsidiaries under bunker supply arrangement with TFG Marine.

Oil storage terminal and two oil jetties have been awarded FSS Certification after a comprehensive approval process and an impartial third-party assessment.

The 10,300 dwt bunker tanker is now the largest tanker in Monjasa’s Northwest Europe fleet, it highlights.