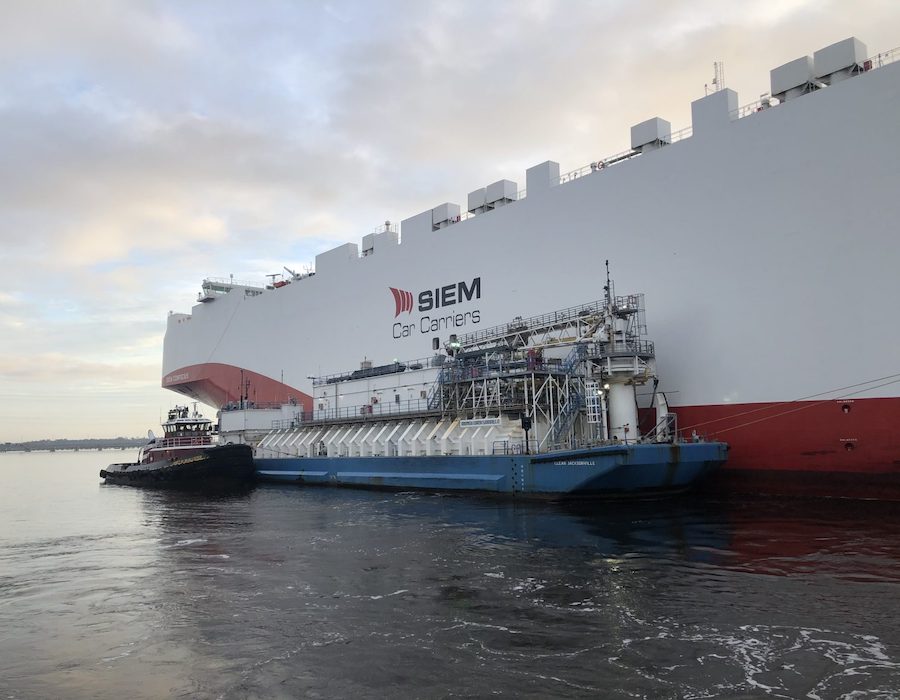 In preparation for the bunkering, JAX LNG worked closely with TOTE Services to utilise the Clean Jacksonville while also gaining acceptance from the U.S. Coast Guard to perform the bunkering during all potential cargo loading conditions. After loading at the JAX LNG facility, the Clean Jacksonville maneuvered alongside Siem Confucius to perform the milestone fuel transfer.

The 7,500-car-capacity Siem Confucius and its sister ship, Siem Aristotle, are Liberian-Registered and regularly call on JAXPORT to unload factory-new Volkswagen Group of America cars and SUVs.

“We are thrilled to partner with other pioneers in the environmental conservation movement, including Volkswagen, JAX LNG, TOTE Services, and JAXPORT, to reduce emissions while providing world-class service to the industry.”

“This commercial bunkering is a major milestone for TOTE Services and a significant step toward supporting clean fueled vessels operating around the world,” said TOTE Services President Jeff Dixon.

“TOTE Services’ significant experience with LNG – combined with our technical expertise and commitment to safety – allows us to assist other customers adopting use of the cleanest, most readily available fuel for shipping today and into the future.”

“Some of the world’s most eco-friendly ships call JAXPORT thanks to the innovation and vision of our customers and port partners,” said JAXPORT CEO Eric Green. “Jacksonville is a global leader in the use of LNG and we are proud to support the continued growth of LNG in the maritime industry and beyond.”

‘The market outlook for the next 10 years is exponentially strong, and CRYO is targeting a lead position in the disruptive marine energy market,’ said CEO.