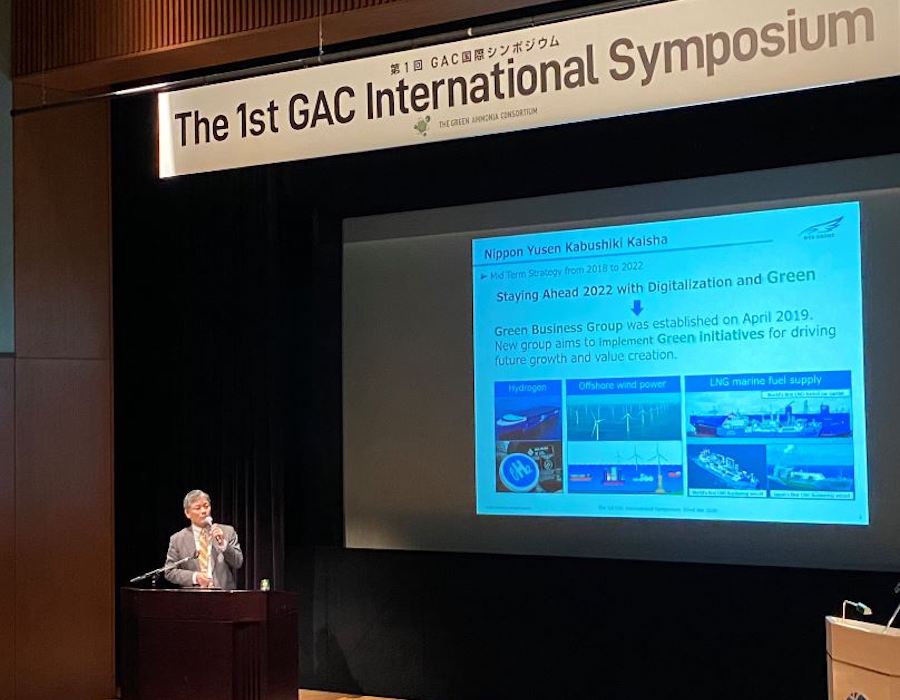 NYK presented its approach of using ammonia as marine fuel for zero-emission ships at the first symposium of the Green Ammonia Consortium (GAC)* on Wednesday (22 January).

Ammonia does not emit carbon dioxide (CO2) when it is heated and would thus be expected to contribute to the effort to address global warming. NYK is participating in the consortium to consider not only the maritime transport of ammonia as a power generation fuel used by electric power companies but also the use of ammonia as marine fuel, one of the solutions for decarbonisation.

At the symposium, lectures were segmented into four fields in which CO2-free ammonia** could be used — production, technology, demand, and regulation. NYK, on the demand side, made a presentation introducing ammonia as marine fuel from both the technical and operational side.

The NYK Group is making efforts to create next-generation green businesses involving alternative marine fuel to realize decarbonation and the company’s basic philosophy of “Bringing value to life” and contributing to the betterment of societies.In accordance with the NYK Group’s medium-term management plan “Staying Ahead 2022 with Digitalization and Green,” the group is working to achieve the SDGs through its business activities, and this approach is one of the group’s initiatives.

Trial will take place on board the 37,000 DWT chemical tanker Stolt Inspiration as she sails from Rotterdam, the Netherlands to Houston, US.