Integr8 Fuels: Prices are on the rebound and all eyes are on OPEC+ 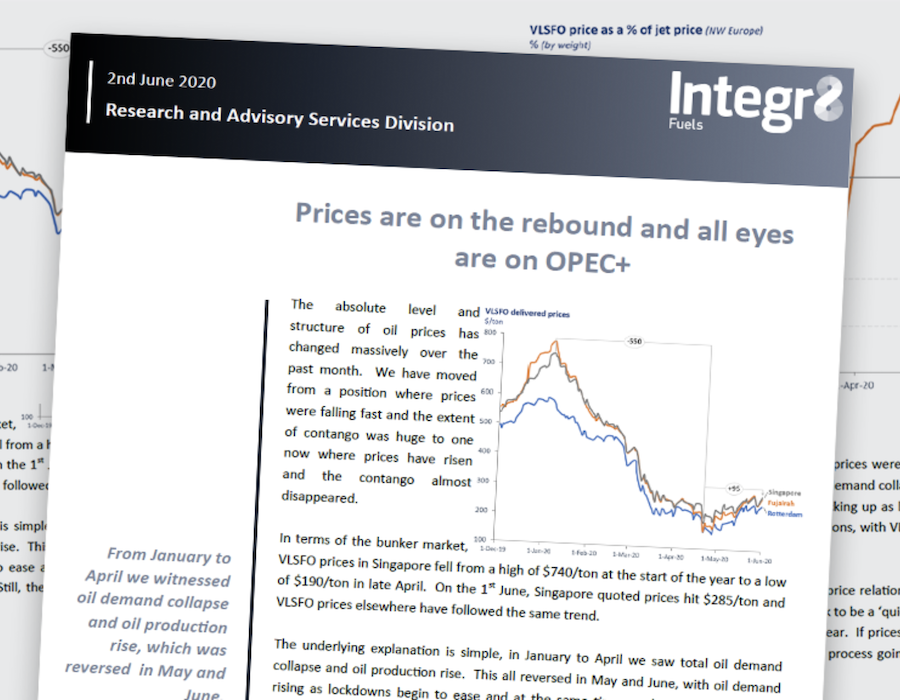 Integr8 Fuels, the bunker trading and brokerage arm of Navig8, on Tuesday (2 May) published an article analysing current trends and market forces in the oil market in relation to the bunker fuel market, focusing on the upcoming OPEC+ meetings that would determine production quotas for Q3.

The absolute level and structure of oil prices has changed massively over the past month. We have moved from a position where prices were falling fast and the extent of contango was huge to one now where prices have risen and the contango almost disappeared.

In terms of the bunker market, VLSFO prices in Singapore fell from a high of $740/ton at the start of the year to a low of $190/ton in late April. On the 1st June, Singapore quoted prices hit $285/ton and VLSFO prices elsewhere have followed the same trend. 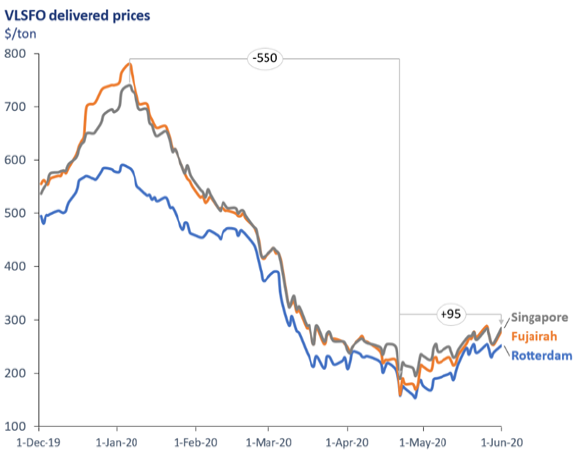 The underlying explanation is simple, in January to April we saw total oil demand collapse and oil production rise. This all reversed in May and June, with oil demand rising as lockdowns began to ease and at the same time production was falling as OPEC+ cutbacks kicked in. Still, the recent price rise is only a fraction of the price collapse.

Clearly, the absolute price move has been the headline news and the key factor, but it is also worth looking at what has happened to bunker prices as part of the overall oil barrel. The impact of Covid-19 on demand in our sector has been far less than in the jet, gasoline and diesel markets. This is shown in demand estimates, where the jet market has fallen by around 70% compared with the bunker market down by only around 10%. 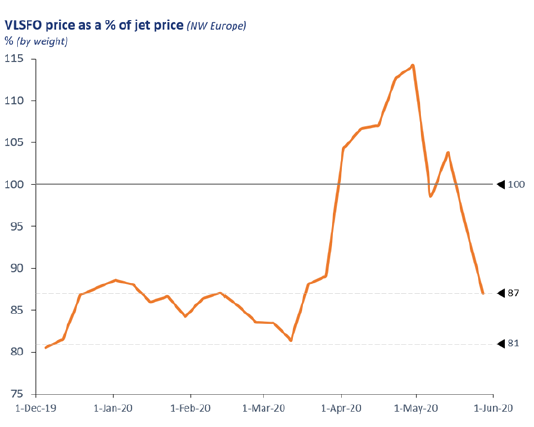 For these reasons, price relationships have gone to extremes. As an illustration, before the covid-19 pandemic VLSFO prices were around 81-87% of the jet fuel price (in NW Europe); at the height of the demand collapse VLSFO prices were at a 15% premium to jet fuel. Now demand is picking up as lockdowns ease, so this relationship has returned to more ‘normal’ conditions, with VLSFO back to a 13% discount to jet.

Summing up, prices are up from their floors and price relationships are returning to-wards more ‘normal’ levels, but there doesn’t look to be a ‘quick fix’ to get prices any-where near where they were at the start of the year. If prices ever do get back close to these levels its likely to be a long, drawn out process going through at least into next year.

At the moment all eyes are on the OPEC+ meeting, with indications the May/June quotas will be rolled over into the third quarter (either as a whole or reviewed on a rolling monthly basis). Current futures prices have factored this in already and so confirmation of a rollover may see limited price gains, but failure will see a price drop. As discussed in some of our other recent Integr8 notes, it is these overall supply developments alongside how quickly demand rebounds that will determine absolute price levels going forward and these factors will not be really influenced by the bunker market.

The planned OPEC+ meetings are scheduled for the 9th and 10th of June, although there has been some speculation that these could be brought forward to this week. Either way, we will publish a note on the outcome to see where pricing could be going.