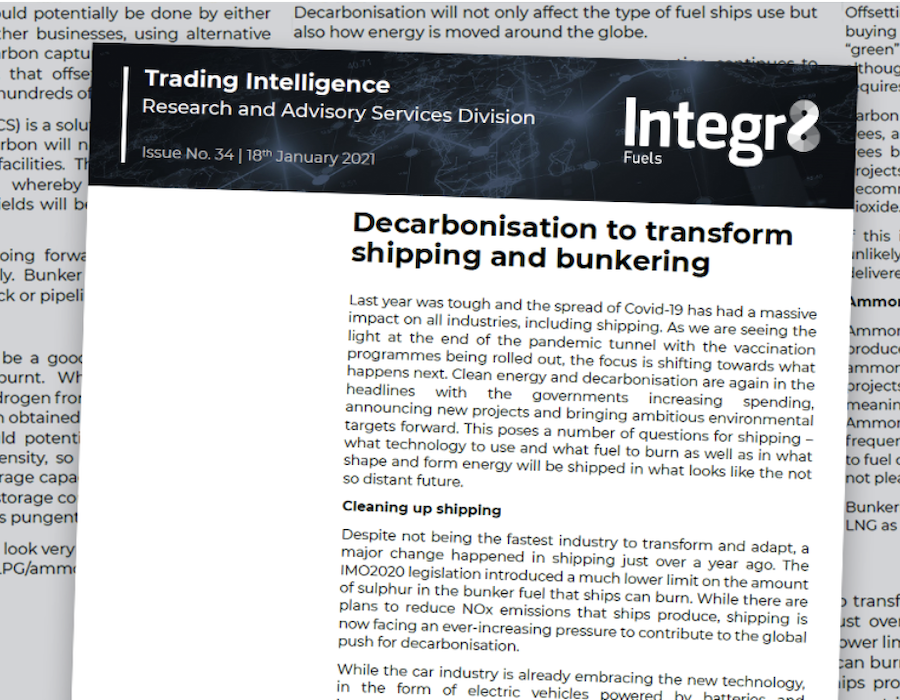 Integr8 Fuels, the bunker trading and brokerage arm of Navig8, on Monday (18 January) published an summary on the various ways the decarbonisation of shipping will impact the bunkering industry and the various opportunities it presents; it was written by Anton Shamray, Senior Research Analyst:

Last year was tough and the spread of Covid-19 has had a massive impact on all industries, including shipping. As we are seeing the light at the end of the pandemic tunnel with the vaccination programmes being rolled out, the focus is shifting towards what happens next. Clean energy and decarbonisation are again in the headlines with the governments increasing spending, announcing new projects and bringing ambitious environmental targets forward. This poses a number of questions for shipping – what technology to use and what fuel to burn as well as in what shape and form energy will be shipped in what looks like the not so distant future.

Despite not being the fastest industry to transform and adapt, a major change happened in shipping just over a year ago. The IMO2020 legislation introduced a much lower limit on the amount of sulphur in the bunker fuel that ships can burn. While there are plans to reduce NOx emissions that ships produce, shipping is now facing an ever-increasing pressure to contribute to the global push for decarbonisation.

While the car industry is already embracing the new technology, in the form of electric vehicles powered by batteries and increasingly looking into fuel cells, shipping remains in limbo and has not “decided” on the technology that will take it forward. The main question is what type of technology will be able to fit into the limited space on a ship, provide for a good range and not impair a ship’s carrying capacity. While traditional power plants can be replaced with hectares of solar panels or wind farms to generate the equivalent energy, this cannot be achieved on a vessel. Below is an overview of the potential solutions for shipping and how they may transform bunkering.

Offsetting emissions or using carbon capture would mean that shipping may continue using the current fuels (with further abatement technology but with the ever growing pressure to change) or transition to the next generation of fuels, which could have lower SOx, NOx, and CO2 emissions. These fuels could be LNG (10-20% less carbon emissions), which is already gradually taking off and methanol. Both have lower energy density than conventional fuels and require certain handling conditions.

Offsetting carbon emissions could potentially be done by either buying carbon credits from other businesses, using alternative “green” investments such as carbon capture or by planting trees although calculations suggest that offsetting a single voyage requires planting and growing hundreds of thousands of trees.

Carbon capture and storage (CCS) is a solution similar to planting trees, although the emitted carbon will not be captured by the trees but rather by the CCS facilities. There are a number of projects being developed whereby salt caverns and decommissioned oil and gas fields will be used to store carbon dioxide.

If this is the preferred way going forward, then bunkering is unlikely to change dramatically. Bunker fuel will still likely be delivered by a tanker barge, truck or pipeline.

Ammonia is a gas that could be a good solution as it doesn’t produce any carbon when burnt. While currently most of ammonia is produced using hydrogen from natural gas, ammonia projects using “green” hydrogen obtained by electrolysis also exist meaning the entire chain could potentially be carbon neutral. Ammonia has lower energy density, so it requires either more frequent refuelling or more storage capacity on board compared to fuel oil. It also needs certain storage conditions and generally is not pleasant to handle due to its pungent smell.

Bunkering ammonia would not look very different from taking on LNG as it is typically carried by LPG/ammonia tankers.

This is already a viable option for road vehicles, and we are seeing faster than expected uptake. While batteries may be a viable option for short-haul shipping, including ferries and small craft, this technology is unlikely to be able to produce enough energy to power a seagoing vessel in the near future. There is hope that solid state batteries may change this situation at some point in a more distant future.

Should battery technology develop to allow them to be installed on seagoing vessels, bunkering may look very different to what it looks now. Ship’s batteries could be recharged by a floating charging barge or at the jetty or potentially swapped to allow a quicker turnaround.

Fuel cells were invented almost 2 centuries ago, although until now their application has been mostly limited to power generation, space and military. However, they are increasingly being used in the automotive industry and several JVs have been concluded to extend its application to marine technology.

Fuel cells can reach 80-90% efficiency, although most currently rely on hydrogen storage and supply. Storing hydrogen can be tricky as it is prone to leakages and is very explosive. Fuel cells can also be developed to use LNG, methanol, ammonia and other fuels as the source of hydrogen. To achieve the maximum reduction in carbon dioxide emissions all these fuels will also have to come from “green” sources.

A ship equipped with fuel cells in the future will likely be supplied by a tanker carrying hydrogen, LNG, ammonia, methanol or other fuels or from the jetty.

Fitting ships with nuclear reactors can, with correct maintenance and servicing, deliver enormous amounts of power and provide an almost limitless range. This technology has primarily been used by the military, although a small number of nuclear-powered merchant vessels have also been built. Concerns about safety and the long-term cost of deactivating and storing spent nuclear fuel have outweighed the benefits.

Nuclear powered ships do not need to “bunker” frequently, however they also require the offloading of used nuclear fuel for recycling. Had ships made a switch to nuclear power, the bunkering industry would likely not exist in the current form. It is possible that only a handful of suppliers would be allowed to operate in the market, either run by or under very tight supervision from the international agencies.

Energy transportation by sea may not be the same

Decarbonisation will not only affect the type of fuel ships use but also how energy is moved around the globe.

As the share of wind and solar energy generation continues to increase, it increases the need for storing excessive energy. Batteries are one way to do it. Another way is to convert the electric energy into fuels, for example by separating hydrogen from water using electrolysis or going even further by reacting hydrogen with nitrogen (from the atmosphere) to produce ammonia. Hydrogen and ammonia can then be loaded and transported by gas carriers.

Out of the other two fuels mentioned in the article, LNG will continue to be transported by gas (LNG) carriers, and only methanol is transported in the liquid form and will require tankers. Should batteries dominate, it will likely require specialist carriers or be transported as a container good.

It goes without saying that new technologies and fuels, besides having technical feasibility, also need to make sense economically. There is no doubt that governments will increasingly support the green fuels initiatives, introduce legislation, provide subsidies and the current capital inflows will help make these technologies cheaper and ready for mass implementation.

This is a time of great change, but also great opportunity. The change in the energy landscape will no doubt transform shipping and bunkering, and we may have no other choice but to embrace this transformation and be part of it.