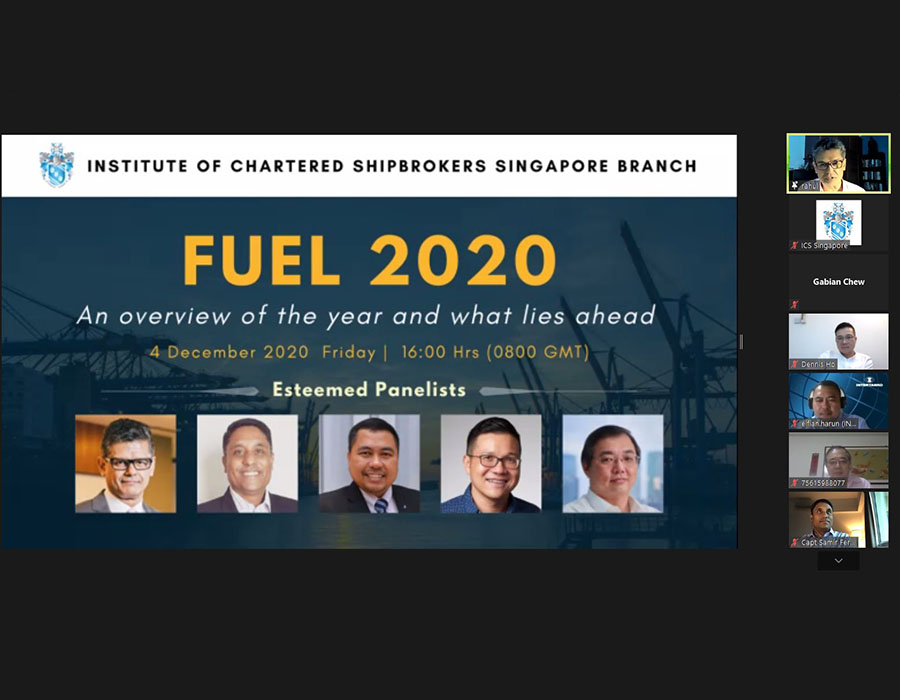 Representatives from different fields of the bunkering sector gathered at the FUEL 2020 webinar organised by the Institute of Chartered Shipbrokers (ICS) Singapore branch on Friday (4 December).

Though panellists discussed an overview of the year and provide insight from their respective fields of expertise, a pillar central to their respective presentations was the uptake of ISO 8217:2017 specification marine fuels within the shipping industry.

Captain Rahul Choudhuri, Managing Director (Asia, Middle East, and Africa) at VPS, who moderated the webinar started off the session by providing a snapshot on marine fuel quality in 2020.

“What is interesting to note is that globally, as we end the year, the global off-spec fuels that we see stand about 6%,” shared Captain Choudhuri.

“The figure has not changed much even though the fuel types have changed over the year.”

He points out the issue of fuel stability continuing to be encountered by vessels, and foresees this to be “a serious challenge ahead” moving into 2021.

Overall, VPS records have shown a 10% increase in vessels adopting the use of ISO 8217:2017 marine fuel quality standard during 2020 when compared to 2019 data, says Captain Choudhuri.

“The hesitation to use ISO 8217:2017 specs for the VLSFO grade is more a mindset. If we look at VLSFO as a product, the difference between the 2010 and the 2017 specs is almost non-existent,” said Captain Fernandez.

He was quick to note the maritime industry being the only sector which is affected by the dilemma of on-spec products that are potentially not fit for purpose.

“This is an unacceptable idea in any other industry. When you go to buy something, if the product is based off a certain specification it is acceptable to use,” he states.

ElbOil Singapore – Upbeat on current shipping market and year ahead

Dennis Ho, Managing Director at bunker trading company ElbOil Singapore Pte Ltd was largely positive about the performance of the bunkering sector this year and looks forward to 2021.

Any off-spec issues were largely kept to a minimum with no major issues unlike in 2018 when chemical contamination in bunkers were widespread.

“Moving forward, I don’t expect any issues to surface quality wise; in fact, I can only see the quality side of things continuing to improve as bunker suppliers and traders become more adept to the new bunker fuels.”

Ho further notes he is seeing more shipowners asking for the ISO 8217:2017 marine fuel quality standard and believes the development is “something very positive” for the maritime industry, though current avails for the material remain limited.

The direction to have more avails of ISO 8217:2017 bunker fuel in the shipping industry can only be possible though a mandate from regulators – followed by compliance from oil majors.

Regarding issues of limited credit from banks due to the recent commodity trading mishaps, Ho believes financial institutions will eventually return to the oil and bunker trading sector in the current low interest rates environment and eventual measures that will be put in place to ensure greater accountability.

“Banks that were affected by the recent incidents have withdrawn themselves from this sector. But I believe it is only a matter of time when they will take a relook into this industry again, and they will be back,” he states.

“Going forward, I am optimistic for next year and I think the market will come up stronger. Relative to the other sectors, shipping has done really well this year.”

“The debate on how bunker samples are taken for measurement of 0.5% sulphur will not end or will not disappear. You could be in any part of the world and this problem still keep reappearing,” states Neo.

Another matter highlighted by Neo was the availability of HSFO as a marine fuel for shipowners operating scrubber equipped vessels.

“The buyers are worried and are asking ‘Hey, where can I get high sulphur fuel?’ The product is available in Singapore and China, but does many of the other smaller ports has it?” he informs.

“They know for a fact that HSFO and VLSFO cannot be mixed and need to be segregated. The concern for availability of HSFO was why Singapore port recently saw a huge increase in HSFO demand.

“Even one of my buyers actually fixed term contract for HSFO all the way up to June 2021 as they are worried of HSFO availability at the smaller ports.”

Regarding limited avails of ISO 8217:2017 bunker fuel in the market, Neo believed bunker suppliers cannot guarantee the specification due to their agreement with their cargo providers. As long as cargo traders or providers do not want to guarantee ISO821:2017 specs, physical suppliers can only guarantee what was agreed which can be ISO8217:2010 or 2012 specs.

Elfian Harun, Environment Manager & Assistant Regional Manager Asia-Pacific at INTERTANKO, started his presentation by stating the shipping association views the implementation of IMO 2020 as a success.

“We know this success is possible only because of the coordination made by IMO member states, ship owners, charterers, suppliers, oil producers, and even the standards development organisations working hand in hand,” notes Harun.

“Yes, we hear of issues surfaced at the early part of this year but right now we are in December and we note the declining number of issues being reported. So, we can only assume the issues have been sorted out by the shipowners and bunker suppliers.”

“Our point of view is you need good fuel to be supplied to ships. If bunker suppliers deliver lousy fuel, the engines of the ships can be affected, and for tanker owners this is especially risky when they are fully loaded,” he said.

“The risk to safety of navigation to the ship, crew, and cargo is very high if the engine breaks down especially in busy ports.”

Harun emphasised it is important for vessels to receive bunker fuel that is not only on-spec, but also fit for purpose.

This is even more important due to the complex nature of marine fuel blends; where chemicals (such as contaminants which are unlisted under ISO 8217 specification) may still form part of an on-spec product that could harm the engine.

Harun echoed a message of support to Captain Rahul Choudhuri of VPS before ending his turn in the panel.

“Captain Rahul, I heard of your suggestion during SIBCON for ISO 8217:2017 to be mandated?” Harun asks.

“This is for the local regulators to decide but definitely we [INTERTANKO] are of the opinion that bunker procurement should be based on the latest version of ISO 8217, if this is one way to ensure that safe fuel is supplied to ships.”

The company recorded impairment charges of $91.9 million primarily related to its marine segment, it notes.

Trading halted ‘pending release of an announcement in relation to inside information of the company’.