Unni Einemo of the International Bunker Industry Association (IBIA) on Wednesday (29 July) published a reminder to the bunkering industry highlighting the compliance of bunker delivery notes with the MARPOL Annex VI:

IBIA would like to remind the bunker supply community about the importance of ensuring the bunker delivery note, and in particular the supplier’s declaration, comply with MARPOL Annex VI, as we have seen recent examples of BDNs that fail to comply.

Appendix V of MARPOL Annex VI sets requirements for Information to be included in the bunker delivery note (regulation 18.5). Amendments adopted by the IMO’s Marine Environment Protection Committee (MEPC) in 2017 entered into force on 1 January 2019.

Appendix V of MARPOL Annex VI requires the following information must be included on the BDN:

It also requires the supplier to sign a declaration to confirm that the sulphur content is in accordance with MARPOL requirements. Below is a copy of the regulatory text in appendix V as it appears in Resolution MEPC.286(71). 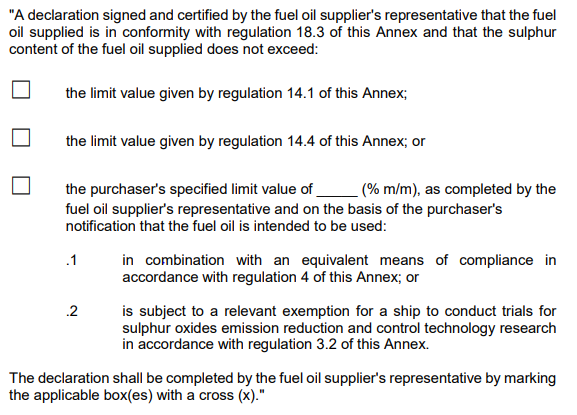 It is important to note that the above is not intended to be a universal template; it only describes the regulatory requirements for the declaration. This means the format and text can be rephrased to improve clarity. This was made clear at MEPC 71 following an intervention by IBIA, pointing out that there is a risk that barge crew filling in the form might get Regulation 14.1 and regulation 14.4 mixed up, for example.

IBIA has helped several members with queries about how to ensure their BDN complies with the regulation. Suppliers can, for example, omit any reference to fuels above 0.50% sulphur (the third tick box) if they are not offering it. IBIA has suggested the following format to improve the clarity of the supplier’s declaration on the BDN, which can help ensure the documentation is less open for misinterpretation and more likely to be filled in correctly by the supplier’s representative.

I certify that the fuel oil supplied is in conformity with regulation 18.3 of MARPOL Annex VI and that the sulphur content does not exceed:

Further comments are available in an IBIA advisory from 2017, though it must be noted that the reference to a 3.50% sulphur limit is no longer valid as of 1 January 2020, which is when the limit under regulation 14.1 fell to 0.50% sulphur.

Indeed, one of the issues we have seen with some recent BDNs is that they still refer to the 3.50% sulphur limit under regulation 14.1 of MARPOL Annex VI, indicating that some suppliers have failed to update their BDNs to comply with IMO 2020 requirements.

IBIA would urge suppliers to ensure they provide the required information, and to always insist on getting at least the required notification from the buyer about the intended compliant use of any fuel order where the buyer specifies sulphur exceeding 0.50%.