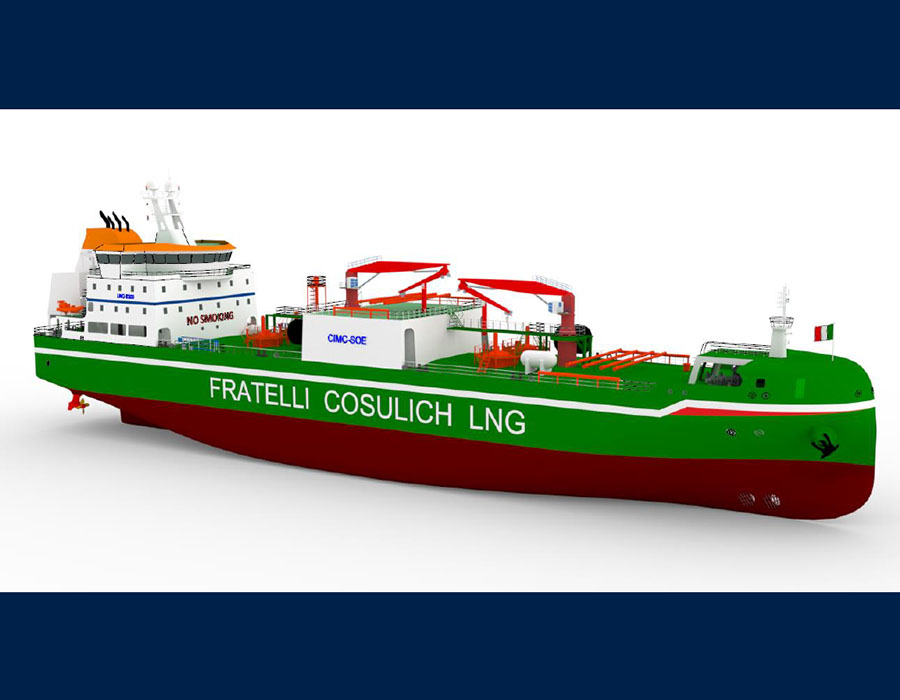 The 5,300 dwt vessel, which will be built at the CIMC SOE shipyard in China, will be able to transport over 8,000 m3 of LNG and 500 m3 of MGO for bunkering. It will be managed by Fratelli Cosulich LNG S.r.l. with delivery expected in the summer of 2023.

The total value of the investment for the construction of the vessel is approximately USD 45 million, according to the Fratelli Cosulich Group.

It is the result of the equity made available by the Group, as well as support received from a pool of financial institutions composed of BPER Banca, Banca Popolare di Sondrio, Cassa Depositie Prestiti, as well as the insurance coverage provided by SACE Simest with “Garanzia Green”.

As the project is contributing to the decarbonisation of maritime transport by deploying LNG bunkering solutions in the Mediterranean Sea, it may be also awarded a grant of €4.5 million by the European Union under the Connecting Europe Facility (CEF) programme, of which the Cassa Depositie Prestiti is “implementing partner” for the European Commission of these important projects.

PwC advised Fratelli Cosulich during the process of applying for the CEF blending call facility 2019.

“We established Fratelli Cosulich LNG with the aim of reaffirming the leadership and entrepreneurship that the Group has always shown in our business field,” said Honorary President of the Group, Ing. Andrea Cosulich.

“It is our responsibility to make shipping increasingly respectful of the environment, in the interest of future generations.

“We acted proactively, in order to offer the coverage of the Mediterranean basin, following the trend that sees new ships under construction equipped with alternative propulsion, especially in the field of passenger ships.

“Our Group will be ready to offer its services with cutting-edge solutions and in line with the evolution of technology itself.”

The cargo management system of the LNG bunkering newbuild will be designed and built by Wartsila Gas System and will be equipped with both quantitative and qualitative LNG and GN (Natural Gas) fiscal measurement systems, as well as with an LNG sub-cooling system.

This will make it possible to have the most effective Boil Off Gas Management technologies, with the consequent elimination of potential environmental impacts and reduction of load losses.

The propulsion and manoeuvring system will be azimuth type, with double bow thruster, such as to allow high manoeuvrability in port areas and will be managed by onshore and offshore personnel with extensive skills in the ship management and LNG sector. The unit will also comply with majors’ safety standards in the industry.

The report also sets the scene for governments to back an industry proposal to form a global $5billion R&D fund to de-risk future investment, said ICS.

Cassa depositi e prestiti, Fincantieri, and Snam to explore infrastructure for use of LNG and bio LNG fuel.