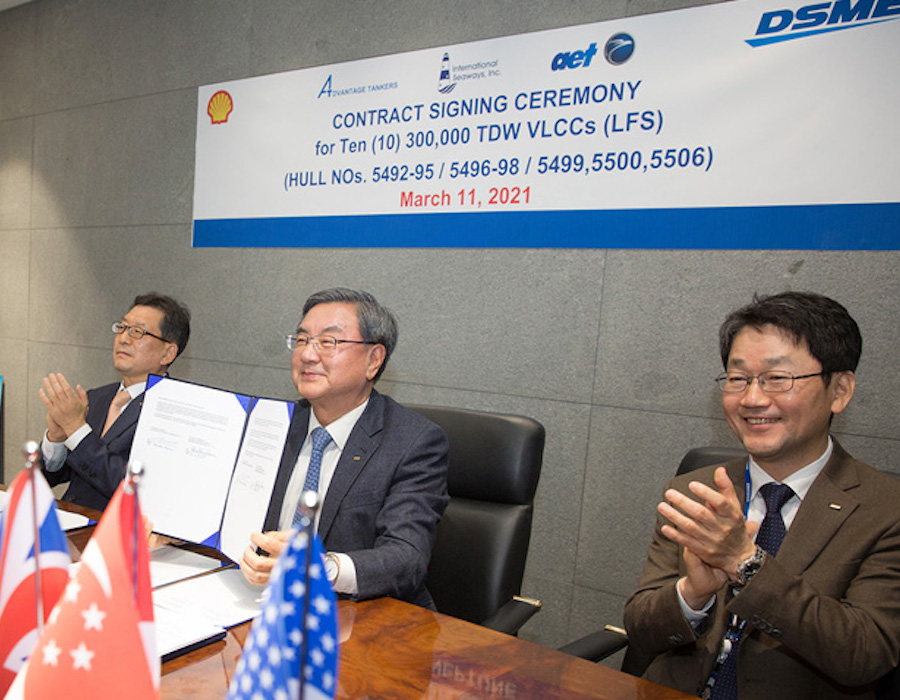 The main contract was concluded within three months after signing a letter of intent for the order in December of last year. These vessels will be built at the Okpo Shipyard and will be delivered to the shipowners sequentially by the second half of 2023.

The ships in the current order are ultra-large crude oil carriers with a high-pressure dual fuel propulsion engine (ME-GI engine) and a fuel tank using high manganese steel, and the latest technology of Daewoo Shipbuilding & Marine Engineering was applied in large numbers.

In particular, DS4, Daewoo’s own smart ship solution, will be applied to actively support the efficient operation of ships and the safe operation of the newly applied natural gas propulsion system. In addition, it is a ship that satisfies the EEDI Phase 3 (Energy Efficiency Design Index), which is the IMO’s GHG emission regulation.

With this solution, the company said it has won orders for LNG-powered LNG carriers, container ships, shuttle tankers, and LPG-powered LPG carriers, as well as LNG-powered oil tankers.

Daewoo Shipbuilding & Marine Engineering, which built the largest number of ultra-large crude oil carriers, said it expects to occupy an advantageous position in the market.

Daewoo Shipbuilding & Marine Engineering has won orders worth about USD 15.6 billion for a total of 16 ships, including 10 ultra-large crude oil carriers, 4 container ships, and 2 extra-large LPG carriers, achieving about 20% of its annual target.

Trial marks first LNG bunkering op in the Port of Kobe, and proves LNG fuel can be supplied safely at the port.

Company prepares crew for LNG bunkering pontoon operations by the end of this year.