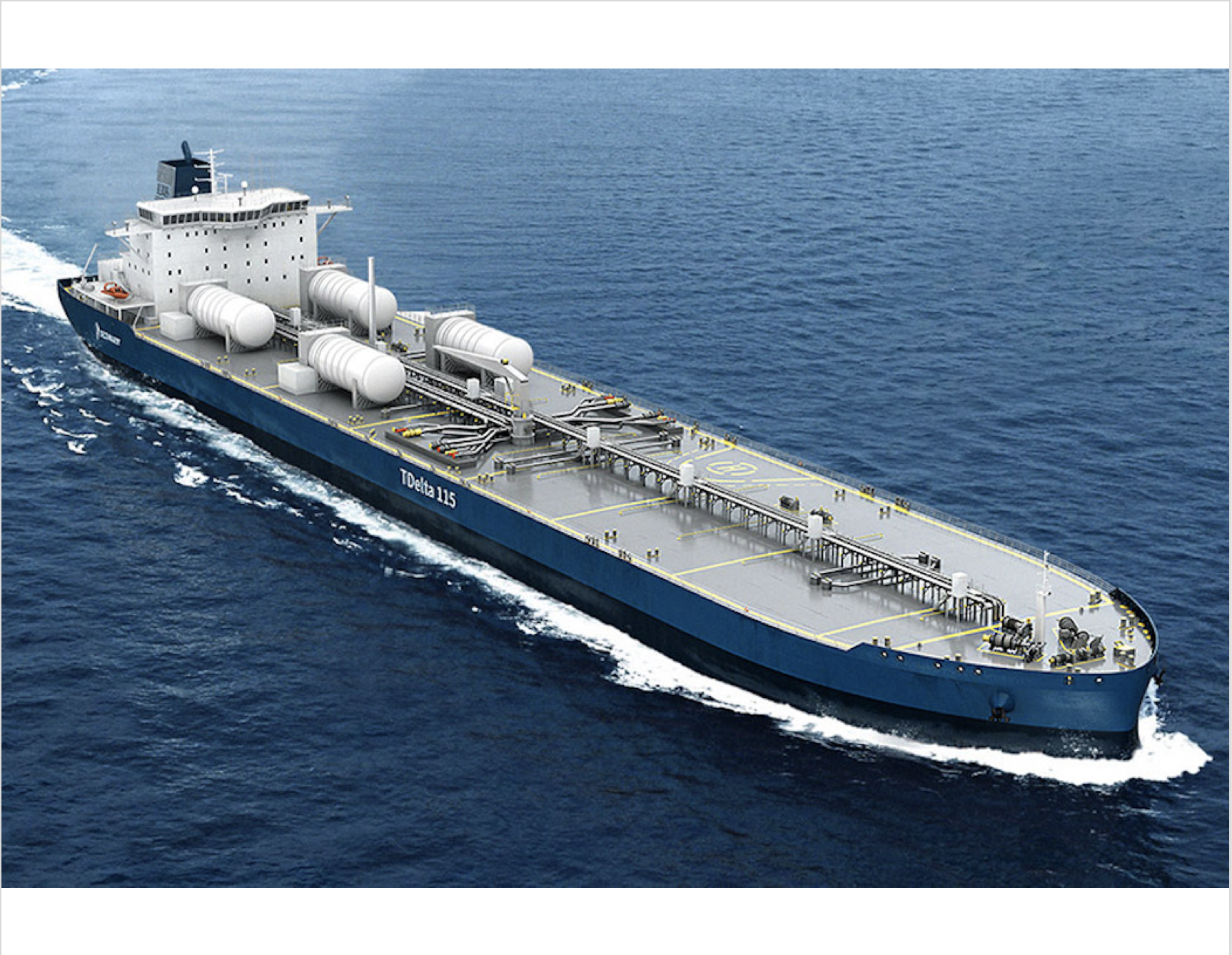 Classification Society DNV on Wednesday, 17 March said it has been involved in a joint industry project (JIP) evaluating fuel technology options and energy-efficiency measures to aid investors with evidence to decide between various alternative fuel options.

Other participants in the project are Deltamarin Ltd as ship designer, Minerva Marine Inc. as vessel manager, and energy company Total as a charterer.  All four companies have high ambitions when it comes to solving the decarbonization challenge by 2050.

The Roadmap towards a Zero-Emission Vessel project centres on a defined concept for two newbuild tankers (the “case ships”) of 2020 vintage. The two vessels investigated in the JIP are:

The main ambition has been to quantify the financial and environmental performance of selected fuel alternatives and technologies and define realistic carbon-robust pathways for the MR and LR2 case ships.

“We have performed a quantitative cost–benefit analysis for fuel options and analysed the potential impact of these fuels and technologies on the MR/LR2’s greenhouse gas emissions,” said Catrine Vestereng, Tanker Director at DNV.

“Our report on the project also discusses how integrating emissions abatement measures like rotor sails and solar panels could impact on ship design, safety, technical complexity and more.”

DNV published the following information outlining the processes involved in developing the report as well as its findings:

The case ship concepts were defined primarily to focus on quantifying fuel consumption and fuel tank requirements. The project’s report discusses other practical considerations – such as class and regulatory requirements – but only qualitatively. Fuel consumption for the MR and the LR2 is based on simulating the case ships’ operating profiles as if they were in Minerva Marine’s fleet and built to Deltamarin’s designs. The study factors in speed distribution, propulsion requirements, main-engine fuel consumption/specific fuel oil consumption (SFOC), energy losses, engine maker’s tolerance and other fuel characteristics.

The hulls for the MR and LR2 concepts are optimized to consume about 10% to 15% less fuel on average than existing vessels delivered during 2015–2017 with similar main dimensions and operational profiles to the case ships. Calculating average yearly fuel consumption for both case ships means they can be compared across different fuel storage capacities, which vary depending on how long owners need them to operate between bunkering. For example, an ammonia-fuelled tanker must be bunkered more frequently than a traditional very low sulphur fuel oil (VLSFO) tanker of today, provided tank dimensions are the same.

Which fuels make financial sense for the MR/LR2 newbuilds?

The project involves complex modelling and analysis of the financial feasibility of fuel and technology options, including less well-known fuels such as blue fuels, e-fuels and biofuels. Blue fuels are produced via reformed natural gas with carbon capture and storage (CCS). Electrofuels (e-fuels) are synthesized by chemically combining “green” hydrogen – from electrolysing water with renewable power – with carbon dioxide from the air or captured from a source such as industrial flue gas. Biofuels are derived from biomass.

The project uses the concept of total cost of ownership for all assessed fuel and technology options with defined fuel price paths. This cost, evaluated over the 20-year lifetime assigned to each case ship, is made up of capital and operational expenditure (CAPEX and OPEX) and fuel expenditure, the most significant variable.

While the detailed findings are confidential, the key message for today’s newbuilds is that liquefied natural gas (LNG) is currently the most cost-attractive fuel and fuel technology option available for GHG emissions abatement. This mirrors findings from similar modelling for a Panamax tanker case ship in DNV’s latest Maritime Forecast to 2050. 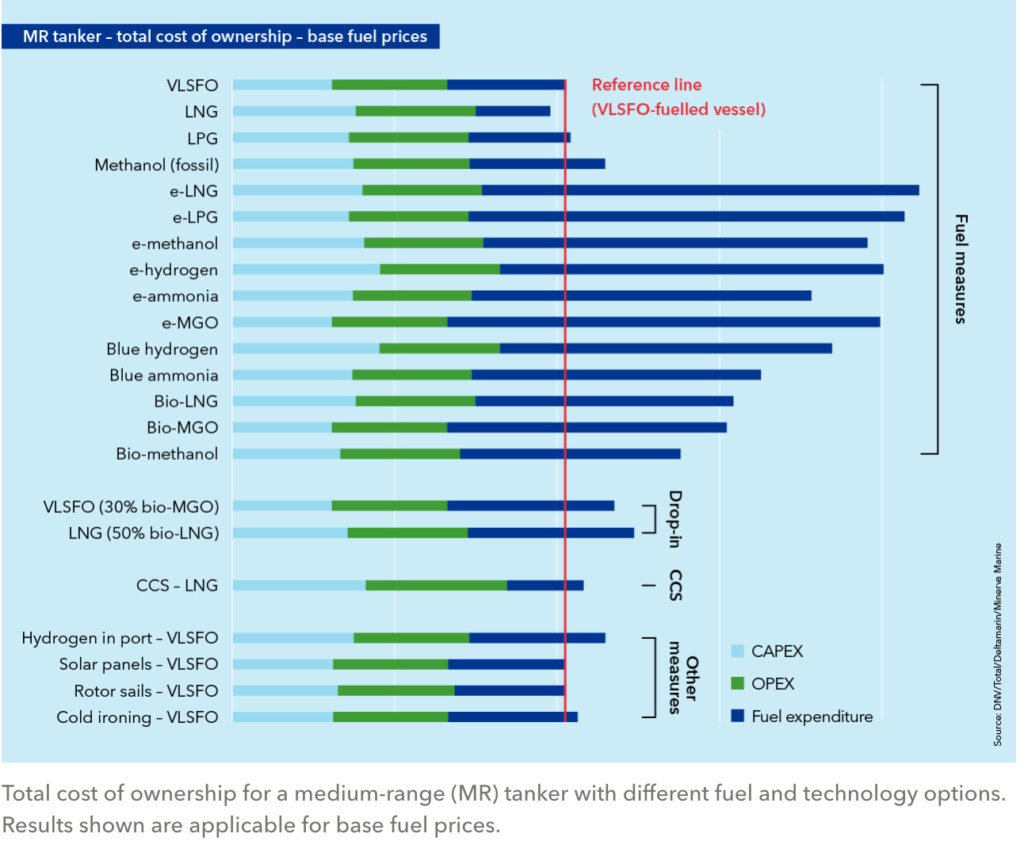 Based on the total cost of ownership (TCO) and reduction of CO2-eq. TtW emissions, the assessed measures have been sorted into three main groups, as shown in the figure below: Remaining uncertainties need to be overcome

The report has significant implications for stakeholders pondering how to meet IMO ambitions for GHG emissions reduction. “The findings are further evidence that alternative low-carbon fuels could and will have to play a major role in meeting these goals,” says Mia Elg, Research Manager at Deltamarin.

The study supports DNV’s view that there is no clear winner among all alternative fuels, and that all pathways to very low emissions come with technical, safety and logistical uncertainties. The uncertainties include the low technology readiness level of on-board CCS, the safe use of hydrogen and/or ammonia fuels on board vessels and the low production volumes and/or limited supply chains for biofuels, electrofuels, blue fuels and on-board CCS.

Bridging to the future through fuel flexibility

“Amid this uncertainty, the key to preparing for a low-carbon future is based on a ‘bridging philosophy’ that involves building vessels that can convert from one fuel to another during the transition,” says Kostas D. Papadodimas, Technical Manager for Newbuildings, Projects and Reliability at Minerva Marine. “This journey is underway as dual-fuel engines increasingly enter operation. They can run on traditional fuel oils and, depending on engine type, on different alternative fuels (e.g. LNG), with lower associated emissions.”

Leaving aside energy-efficiency measures, the project’s report considers some realistic bridging-technology pathways for the MR and LR2 case ships, as described in the table below. These pathways are seen as most realistic because they are based on proven or emerging technologies and environmental performance, and the fuel switching is technically feasible. For example, the pathway from LNG to bio-LNG requires no system modifications, but moving from liquefied petroleum gas to ammonia does. This table presents some potential pathways, but others are actively being investigated by the many stakeholders in the maritime industry.

Summing up the JIP’s key findings

A range of fuel and technology options (21 of them) have been evaluated for two specific vessels – an MR and an LR2 – considering design and environmental and financial performance.

On the environmental side, the main takeaways are:

– Beyond 2035–2040, with today’s technologies, alternative low-carbon fuels will be needed to meet IMO carbon-intensity reduction ambitions.

On the financial side,

– LNG and energy efficiency technologies such as rotor sails reduce GHG emissions significantly – up to 20% for LNG – while at the same time being commercially attractive.

– Abating CO2-eq. emissions with alternative low-carbon fuels comes at a cost. The additional cost ranges vary widely but can be substantial and depend on fuel-price developments.

To meet IMO’s ambition to reduce GHG emissions by 50% (vs. 2008) by 2050, alternative low-carbon fuels will play a major role. There is no clear winner among these fuels and all options come with uncertainties, be it technical, safety or availability.

Therefore, fuel transition pathways should be planned to prepare the transition to future low-carbon fuels while today implementing greener solutions that are already available. Such pathways could involve drop-in fuels or preparing designs for easier future retrofit.

Joint research was initiated at the Gastech trade fair in Houston 2019 where they agreed to jointly develop low and zero carbon solutions for shipping.

‘A number of projects involve converting vessels so they may run on Liquefied Natural Gas (LNG), as well as installing corresponding infrastructure in ports,’ said the EU.