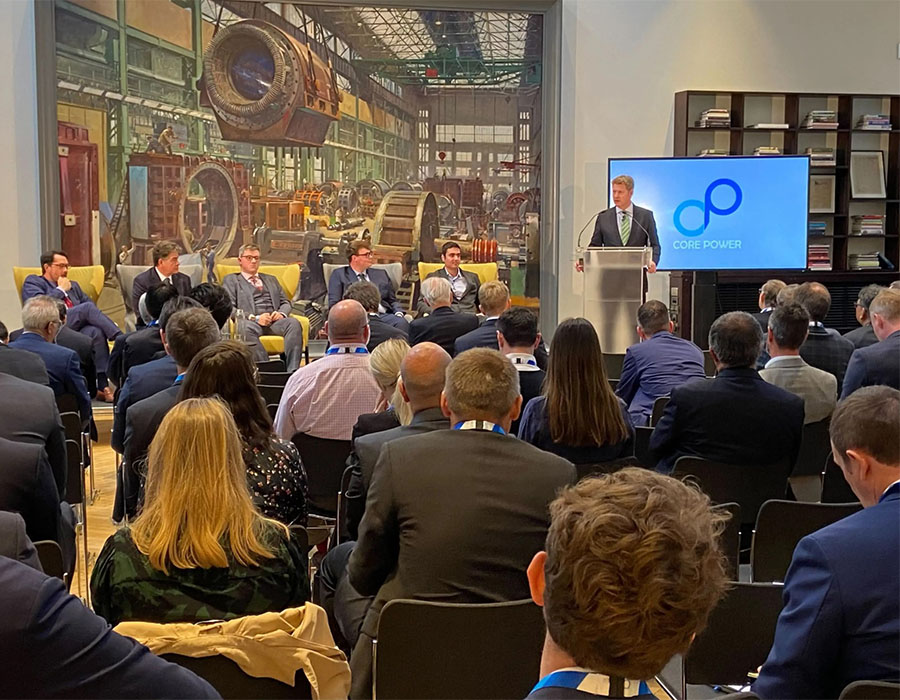 The first ‘New Nuclear in Maritime’ conference held in London on Thursday (6 October) concluded with strong demand for new nuclear technology to meet the needs of zero carbon fuels and future nuclear propulsion systems for large ships, according to UK based maritime and technology innovation company CORE POWER.

The conference, organised at the Science Museum in London by CORE POWER, saw 100 international executives gather to discuss and debate the path forward for molten salt reactors and micro heat pipe reactors in the marine industries.

For the marine industries to meet both stricter environmental targets and remain competitive will remain the biggest challenge as the high cost and low energy content of alternative fuels is realised. Without a prominent nuclear component, the industry is unlikely to meet either of its goals.

Professor Emeritus Dr. Wade Allison of Oxford University illustrated the difference between safe levels of radiation and the current regulatory maximum. A unit of measurement for an absorbed dose of 100 milli-grays (mGy) per month which was the agreed safety limit set in 1934 has a demonstrated record of no harm, in stark contrast to the current safety limit set in the 1950s of 0.1 mGy per month.

Professor Allison, who is one of the world’s leading experts on radiation safety, said that nuclear radiation is safe for life at low and moderate rates and never catches and spreads like infection or fire.

Dr. Mamdouh El Shanawany, previously head of the nuclear safety division of the International Atomic Energy Agency laid out the methodologies adopted by the Agency in promoting nuclear energy for peaceful use and gave an insight into the work being done to provide guidance on new generations of nuclear technologies for the marine and transport sectors.

Secretary General of the World Nuclear Transport Institute, Martin Porter illustrated the exceptionally high standards which have been set for moving nuclear materials around as cargo and illustrated how over 50 years of transporting more than 20 million cargoes of nuclear and irradiated material, no incident has ever caused harm.

Deputy Director Regulations & Standards at the UK Maritime and Coastguard Agency, Gwilym Stone shared how the UK Government are passing the Nuclear Code for Ships, adopted at the IMO in 1981 into law in November 2022 and how the significant work of modernising those rules for a new generation of nuclear vessels can now begin.

Meg Dowling from the American Bureau of Shipping in Houston set out how ABS are working with the US Dept of Energy to map the pathway to demonstration of new nuclear for maritime with the help of the Maritime Nuclear Applications Group working under the National Reactor Innovation Centre.

Mark Tipping from Lloyd’s Register explained the important work being done at LR to create new classification rules for nuclear offshore installations and nuclear-powered ships, in anticipation of the new rules for such assets being passed by the UK Government.

Members of the CORE POWER team in London laid out use cases for molten salt reactors and micro heat pipe reactors at sea to produce synthetic fuels, hydrogen, fresh desalinated water and as future means of propulsion power.

Conference chairman Tobi Menzies concluded the day by reflecting on the string demand now forming in the marine industries for durable, sustainable energy from a new generation of nuclear engines.

The next New Nuclear in Maritime Conference has been announced for Singapore on the 8-9th February 2023.

Seaspan worked closely with VARD Marine Inc. to incorporate emerging technologies resulting in a decrease in emissions and underwater noise.

Including current 12 newbuild order, NYK’s total number of LNG-fuelled PCTCs will increase to 20 by fiscal 2028 through investment of about 200 billion yen.