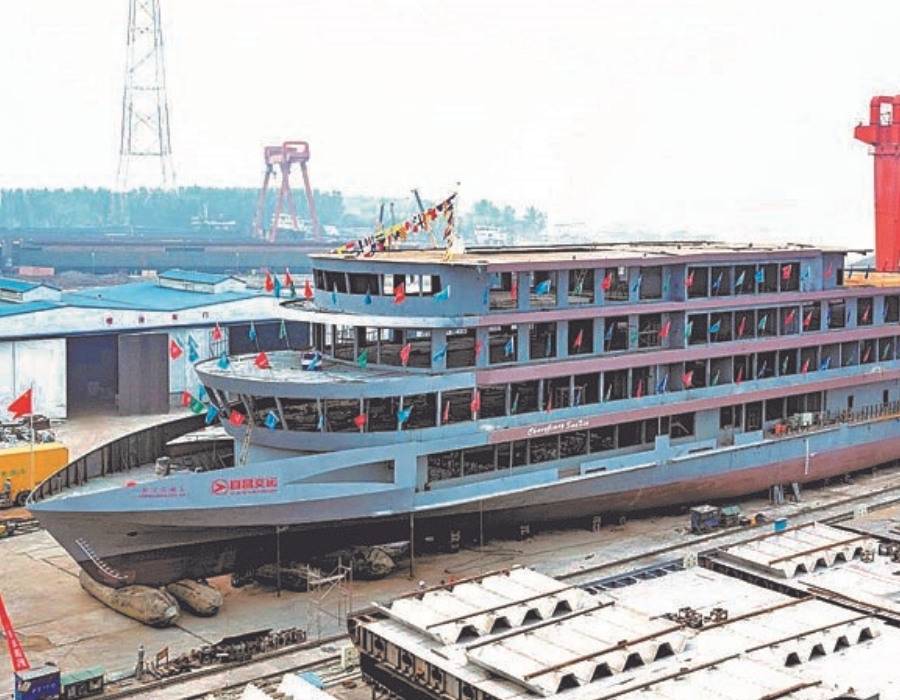 China Classification Society (CCS) on Tuesday (17 May) said China will ramp up the building of fully battery-powered ships to operate on the country’s extensive inland waterways network.

This is following the successful maiden voyage of the Chang Jiang San Xia 1, a 100m length cruise ship with the largest battery capacity in the world.

The vessel was successfully delivered at the Yichang Xin Hui Shipbuilding Co Ltd on the Yangtze River in the Hubei province.

It has capacity for 1,300 passengers and will sail in the reservoir areas of the Gezhouba Dam and Three Gorges Dam in Yangtze River.

This is equivalent to the power of 100 electric cars, which compared to a similar diesel powered vessel.

The ship will be charged by hydroelectric energy with a range of no less than 100 km. It is also one of the first all-electric ships to adopt a system of high-voltage charging and low-voltage power supplement.

The vessel will play a key role in promoting the green development of the Yangtze River shipping industry, which has received increasing attention in recent years.

In 2020, four ministries, including the Ministry of Transport and Ministry of Ecology and Environment, issued a joint plan to curb ship and port pollution, urging comprehensive improvements in pollution prevention and acceleration of the green development of the shipping industry along the Yangtze River Economic Belt.

“CCS is very proud to have worked on this groundbreaking project with the talented team at Yichang Xinhui Shipyard,” said Mr Xu Junjie the GM to CCS Yichang.

“The project demonstrates the implementation of advanced Lithium Battery Power Ship Rules and the building of electric inland waterway vessels in China.

“We expect that the innovations made on this vessel about the size and power of the battery can promote the development of environmentally friendly electric vessels. We have learned a lot particularly about de-risking the build process and the overall safety of electric powered ships.”

Xu said the ship design of the ship has achieved several Chinese “firsts”.

“CCS fully supports the Government’s drive for greener inland waterways and hope what we are learning can be shared with the wider maritime industry as the sector strives towards meeting the IMO GHG emissions targets.”

“CCS Wuhan Rules & Research Institute is closely involved in the project and our battery power technicians are working closely with the ship designer and builder to solve technical problems and control battery power risks,” he concludes.

“For example, the unconventional requirements for assembling, welding, installation and commissioning. We further examined the problems in battery installation and system tests, providing training, to improve the capability of the shipyard.”

‘With the acquisition, we are excited to increase our offering […] and expand Stone Oil’s existing distribution and delivery operations,’ said General Manager.