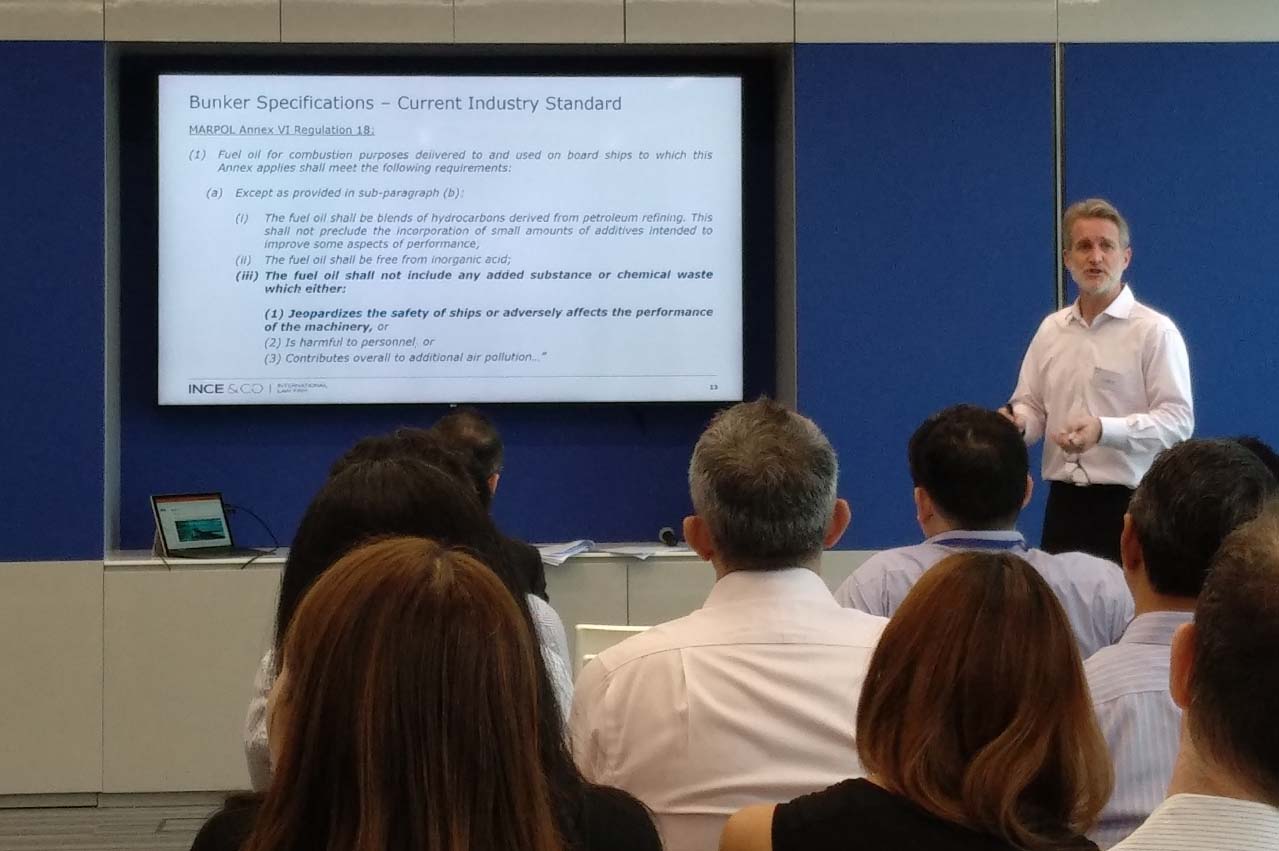 The application of ISO 8217:2017 and MARPOL Annex VI in bunker contracts may offer shipowners and charterers added protection in the event of disputes over contaminated fuels, suggests the Managing Associate of Ince & Co. Singapore LLP.

“In addition to any express compliance with specification, arguably, ISO 8217 or, alternatively, MARPOL Annex VI, offer an additional, separate warranty of suitability or fitness for propose in the supply of HFO/IFO bunkers,” explains Corin Ricketts during a recent presentation attended by Manifold Times.

MARPOL Annex VI Regulation 18(a)(iii):
The fuel oil shall not include any added substances or chemical waste which either:

The incorporation of ISO 8217 and MARPOL Annex VI into charterparties and bunker supply contracts should ensure that the fuel will:

“Vessel Owners and Charterers (who purchase the bunkers) are protected against fuel contamination by a double warranty that the fuel will comply with the contractual specification and also be fit for purpose,” he explains.

“This should offer protection from the supply of bunkers that are off specification or contain contaminants outside normal specification tests.

“However one point to bear in mind; Clause 5.2 and Regulation 18(a) have not been properly tested and there is a certain lack of case law to determine how these clauses will be interpreted – specifically what is the required concentration under Clause 5.2 or what constitutes an added substance or chemical waste for MARPOL Annex VI.

“Rather than negotiate bunker clauses, shipowners and marine fuel purchasers can always use the BIMCO Bunker Quality Clause or BIMCO Bunker Contract respectively as they provide for compliance with ISO 8217.”

Meanwhile, Ricketts pointed out that the BIMCO Standard Bunker Contract Terms offer bunker buyers a 30-day time bar to claims from delivery of bunkers. Bunker suppliers prefer to enforce a shorter time bar of between seven to 14 days but this is generally too short and impractical for buyers.

“During the recent bunker fuel quality crisis the timing for the required GCMS test results stretched from up to 15 days to four to five weeks; with that kind of response, the time bars start kicking in and bunker suppliers once again escape responsibility for the supply of bad bunkers,” he says.

Bunker buyers need to negotiate much longer time limits for bunker quality claims to allow time for the bunkers to be properly tested or consumed and to limit the bunker suppliers contractual exclusions or limitations of liability, suggests Ricketts.

“From a practical point of view, shipowners should comprehensively test all bunkers before consumption and, if possible, get charterers to absorb the extra costs, and crew should check and clean fuel lines and filters on a regular basis to identify problems before they become a serious problem,” he notes.

“Ideally the bunker industry would be better regulated and penalised with fines, detentions and port state control to improve quality control at the source; whilst the 2020 bunker sulphur cap may increase the problem of contamination due to blending, it also has the potential to weed out non-compliant bunker suppliers and elevate international and governmental interest in monitoring and enforcing bunker fuel quality.”

Relevant departments punished and authorities have recovered profits made by PetroChina from reselling imported crude oil as “blended fuel oil”.