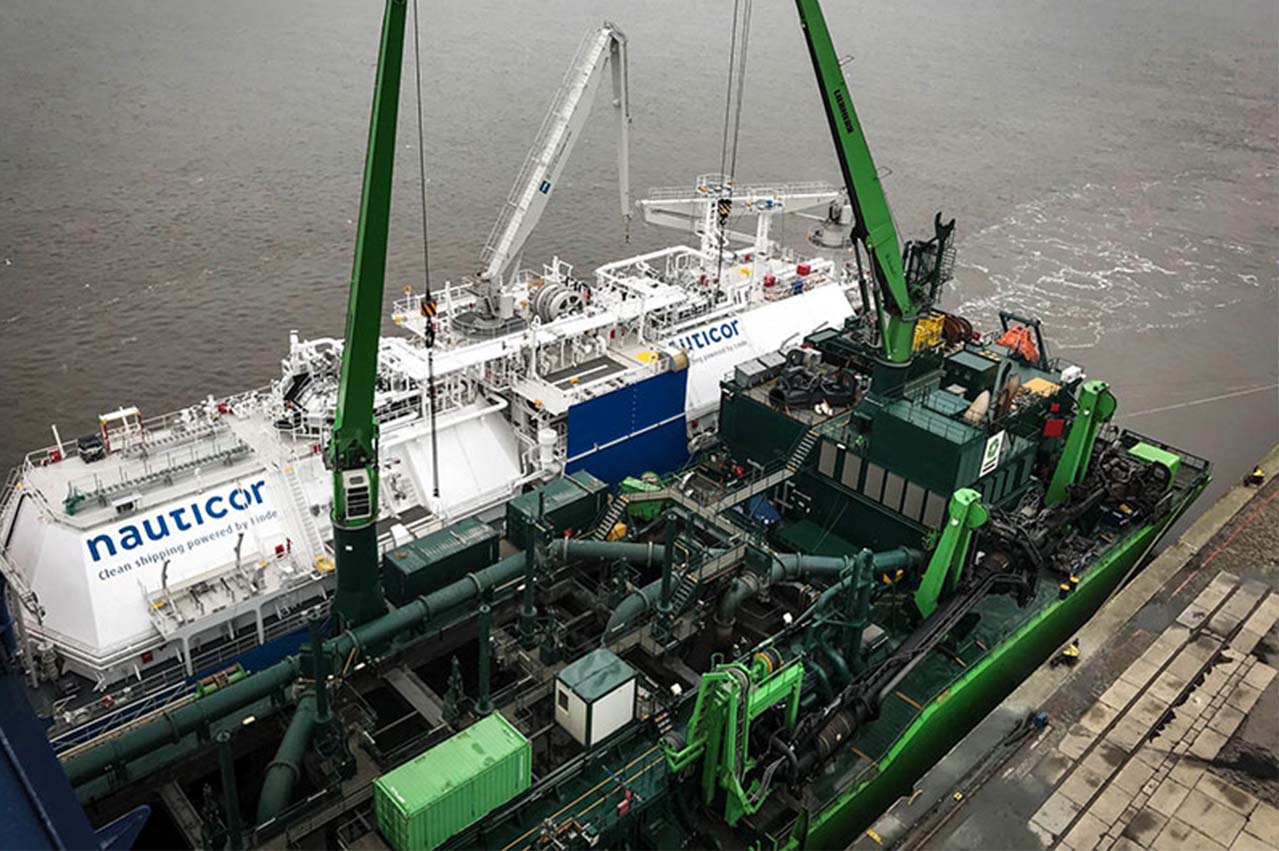 Scheldt River is owned and operated by the DEME Group and is currently conducting maintenance dredging works on the Lower Elbe. In the past, the vessel has received LNG from Nauticor through truck-to-ship bunkering operations.

In the beginning of October 2019, the DEME Group and Nauticor signed a framework agreement for the supply of LNG with the BSV Kairos to DEME’s fleet of newbuild vessels with LNG propulsion. The first ship-to-ship LNG bunkering operation in a German port marks the start for an extended cooperation.

“Our team has been able to achieve another milestone in the development of a comprehensive LNG supply infrastructure with the successful execution of the first ship-to-ship LNG bunkering operation in Germany,” said Mahinde Abeynaike, CEO of Nauticor.

“The operations with the world’s largest LNG BSV Kairos allow for flexible, safe, and efficient supply of the environmentally friendly fuel to marine customers.

“A variety of marine customers are already utilising this service, including product tankers, container vessels, ferries, and special purpose vessels, such as the trailing suction hopper dredger Scheldt River.”

Accordingly, Thorsten Fitzner, Operations Manager for DEME in Germany, was satisfied with the outcome of the bunkering operation.

“As a global leader in the highly specialised fields of dredging, marine engineering, and environmental remediation, DEME is continuosly working on increasing the efficiency of its services for customers with the aim to improve productivity and reduce the impact on the environment,” he said.

“The use of LNG as fuel allows us to reduce the emissions from our vessels significantly. Having conducted truck-to-ship LNG bunkering operations so far, bunkering of the environmentally-friendly fuel from BSVs, such as Kairos, marks another milestone in the use of LNG as maritime fuel.”

The possibility to supply LNG through a ship-to-ship bunkering operation marks an important milestone for the shipping sector in Germany in general, notes Brunsbüttel Ports.

By using larger BSVs, it becomes practical both economically and ecologically to supply larger vessels with significant amounts of LNG. Previous LNG bunkering operations in Germany were conducted solely through the truck-to-ship method.

“All legal and operational prerequisities are in place as a result of the fruitful cooperation with the experts from Nauticor, Brunsbüttel Ports, and the Agency for Coastal Defense, National Parks and Marine Conservation for Schleswig-Holstein (LKN) as the responsible administrative authority.”

In the meantime, the German LNG Terminal GmbH continues to plan activities for a combined LNG import and distribution terminal in Brunsbüttel.

In the future, the supply of LNG to marine customers would profit from the existence of such a terminal, since it is foreseen that LNG bunker supply vessels, such as Kairos, can load LNG as cargo directly at the terminal.