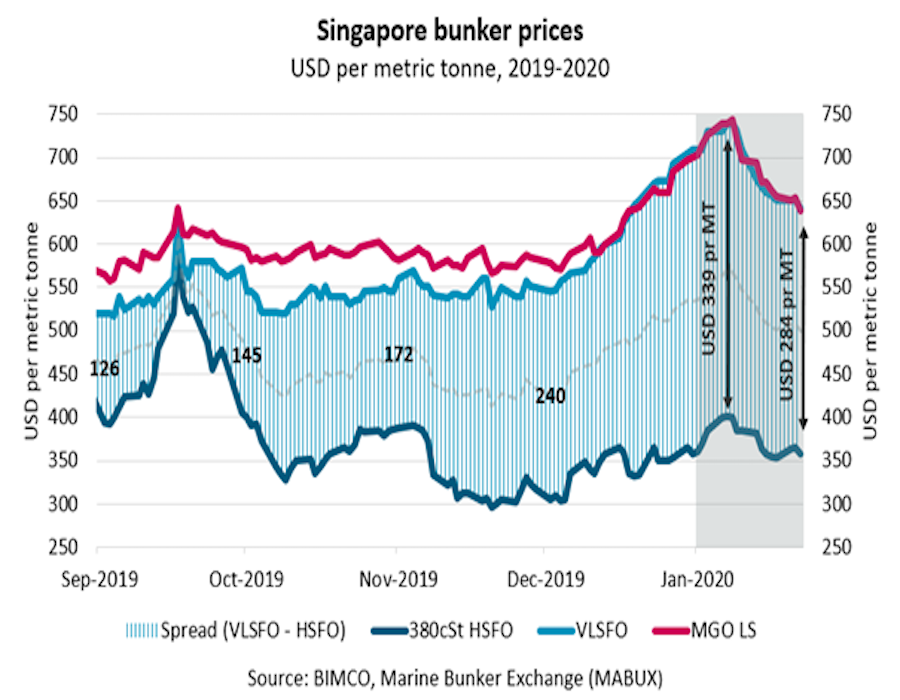 BIMCO, on Friday (24 January) published its ‘Shipping number of the week’ reporting on the largest drop in the price level of VLSFO in Singapore:

Singapore has seen one of the largest drops in the price of Very Low Sulphur Fuel Oil (VLSFO), which peaked on 7 January 2020 at USD 740 per metric tonne (MT) and dropped USD 99 to USD 641 per MT on 22 January. The price has also fallen in other ports around the world.

Prices rose in December as shipowners transitioned to the IMO2020 compliant low-sulphur fuel oil causing the VLSFO and High-sulphur fuel oil (HSFO) spread to reach record breaking levels. This trend has started to reserve, with the VLSFO-HSFO spread narrowing in Singapore by USD 55 per MT to 284 per MT on 22 January from USD 339 on 7 January, a 19% decline.

Transitioning past the first wave of IMO2020

The initial uptick in low-sulphur fuel oil prices marked the first wave of IMO2020, whereas the price levels are now declining towards a point of stabilization.

Even given the recent narrowing of the spread, shipping companies are still faced with a massive uptick in fuel oil costs, which is set to affect operating margins in the upcoming quarters, as many companies have little leeway to pass on the additional costs to their customers.

Despite the lower spread, the investment payback period for a scrubber is between half a year to one and a half years, depending on the cost of the scrubber and daily consumption, which allows for substantial fuel oil cost savings for scrubber-fitted ships.

Built by Shanghai Waigaoqiao Shipbuilding and Guangzhou Shipbuilding, the vessels will be delivered by 2023 and leased to Shell by the Bank of Communications.

Construction of the Prince Rupert Marine Fuels bunkering facility could begin in early 2019.

To enter charters for six scrubber-retrofitted vessels, beginning after installation, with duration into 2022.