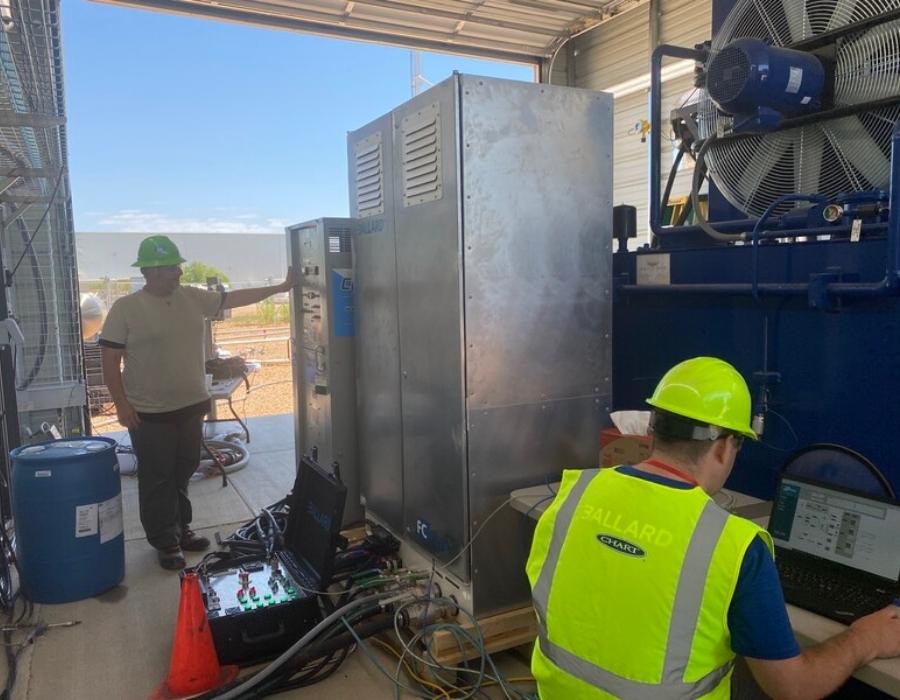 The partners in the LH2 vessel demonstration project, together with Chart Industries, successfully completed a series of performance and functionality demonstrations of marine fuel cells using liquid hydrogen, says Ballard on Thursday (13 October).

The demonstrations were performed with a 200kW fuel cell module using liquid hydrogen as the fuel source from a Chart liquid onboard hydrogen (HLH2) vehicle fuel system.

The module used for testing was Ballard’s DNV type approved fuel cell, FCwaveTM, which has been designed for, and together, with the marine industry. The demonstration proves that heavy-duty applications such as marine vessels powered by Ballard fuel cells will be able to effectively employ Chart liquid hydrogen systems as a fuel.

Liquid hydrogen has a significant space, weight and range advantage compared with gaseous hydrogen -allowing up to double the range without space claims and payload impacts – and offers a simplified fueling infrastructure for heavy-duty mobility applications such as marine, trucks, buses, and rail.

The series of tests was conducted at Chart’s Liquid Hydrogen Test facility in New Prague, Minnesota, U.S.A, and overseen by a team of test and design engineers from Ballard’s Marine Centre of Excellence in Denmark. The data gathered will be presented in a project deliverable for the LH2 Vessel project funded by the Danish Energy Technology Development and Demonstration Programme (EUDP).

“During testing at Chart, we had the pleasure of demonstrating the seamless integration between Chart’s liquid hydrogen storage and vaporiser system and Ballard’s 200kW FCwaveTM module. The combination integrated extremely well with the lower inlet pressure of the fuel cell module, allowing efficient distribution of the hydrogen without the need for costly booster pumps or accumulators. During our extended full power runs in challenging environmental conditions, there were no faults from the module or the hydrogen storage system,” Peter Blach, System Designer, Ballard.

Further paving the way for zero-emission power, these tests show the efficiency of liquid hydrogen as a fuel source and the expanding reach and potential of hydrogen fuel cells as an energy source.

The next milestone will be to identify applications in which liquid hydrogen has the potential to unlock long distance opportunities, within marine, truck, coach bus, off-road, and rail. Chart and Ballard will work to identify potential future demonstration projects for marine, in addition to the aforementioned heavy-duty applications.

‘The defendant […] illegally manipulated the fuel oil market by creating artificial prices that undermined the legitimate forces of supply and demand,’ said DoJ.

Wiluan faces 112 charges under Section 197 of the Securities and Futures Act by trading KS Energy’s shares via Pacific One Energy, reports The Straits Times.

Its bunkering, vessel chartering and petroleum trading segment generated external sales of RM 175.52 million in FY 2021, according to financial statements.