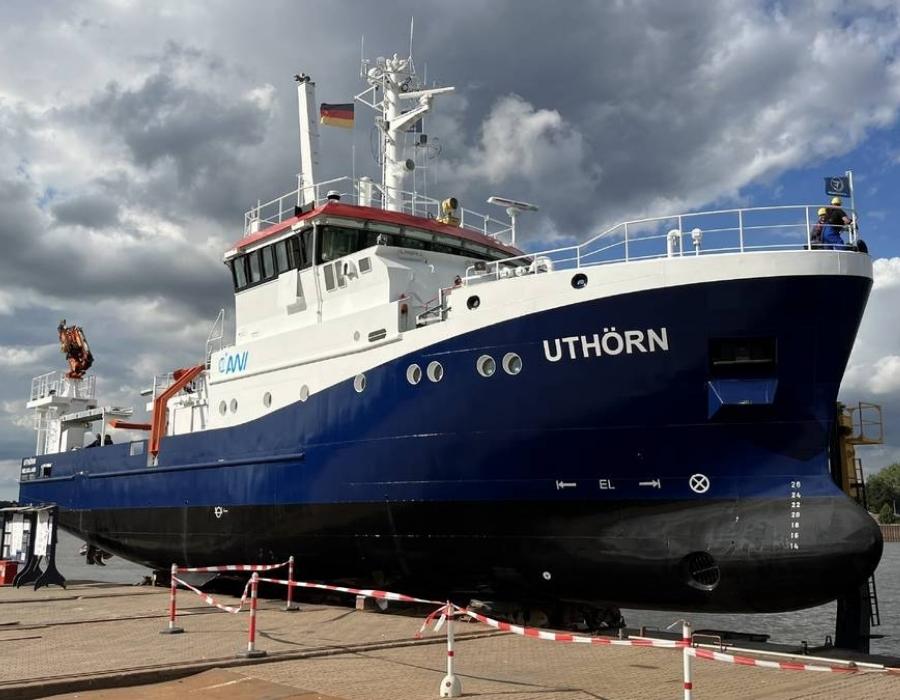 After a two-year construction phase, the cutter is scheduled for a handover to the AWI this December. Over 200 guests from the political, research and business communities attended the christening ceremony and had the chance to inspect the ship.

The institute said in shipping, methanol is still a new fuel and largely untested. However, there have been successful forerunners, which the two modified diesel engines used in the new Uthörn are based on, it added.

With a combined output of 600 kW, they provide electricity for the ship’s two electric motors. Together with Bremerhaven-based partners from research and industry, the Alfred Wegener Institute, Helmholtz Centre for Polar and Marine Research (AWI) has readied a proposal for a synthetic methanol production facility in Bremerhaven, which could be approved by the end of the year.

In a pilot project, renewable electricity from a wind turbine would be used to split water into hydrogen and oxygen via electrolysis. In the next step, this “green” hydrogen and CO2 from a nearby sewage treatment plant could be used to synthesise “green” methanol, which, when burnt, only releases the amount of CO2 that was captured during its production.

In addition to a large working deck with dry and wet laboratories, the new Uthörn features two derrick booms for trawling nets and water samplers, a multi-frequency echosounder for detecting and identifying schools of fish, and an anti-roll tank, which can stabilise the ship on choppy seas.

Accordingly, it offers marine researchers of all disciplines an outstanding platform to learn the tools of their trade – which is also one of its core functions. Like its eponymous predecessor (a 30-metre-long cutter commissioned in 1982), the ship will not only make valuable contributions to coastal research, but also offer students cruises on the North Sea, giving them the opportunity to familiarise themselves with the heavy gear used in field research.

Bettina Stark-Watzinger, Federal Minister of Education and Research, said: “More sustainability in all areas is the order of the day. This is especially true in shipping. That is why I am particularly pleased that I was able to christen a real showcase ship today. The new Uthörn sets standards as the first German seagoing vessel with methanol propulsion. The Alfred Wegener Institute and the Fassmer company have succeeded in building a sustainable, low-emission and innovative research vessel on which we can only congratulate them. The Uthörn is another contribution to a state-of-the-art research fleet.”

Prof Antje Boetius, Director of the Alfred Wegener Institute, said: “Today’s christening represents a milestone on the road to sustainable infrastructure for marine research. The Uthörn will not only support important research into the status quo of our coastal waters; I’m also proud to say that, with the new cutter, we at the AWI are assuming a pioneering role in replacing the use of fossil fuels in shipping. If the project for constructing a prototype green methanol plant in Bremerhaven can commence in December as we hope, we will soon be able to produce this sustainable fuel right at our doorstep.”

Prof Karen Wiltshire, Head of Coastal Research at the Alfred Wegener Institute, said: “As a central pillar of coastal research at the AWI, the Uthörn regularly monitors the physical, chemical and biological status of the North Sea in the German Bight and near Helgoland. By doing so, the ship provides us with valuable and critical long-term data, allowing us to better gauge climate change and its impacts on the marine environment. I very much look forward to new cruises with students and young investigators from Germany and abroad, who will have the chance to learn the practical basics of marine research on board the Uthörn.”

Harald Fassmer, Managing Director of Fassmer, said: “The christening of the new Uthörn marks a substantial contribution to future-ready, climate-friendly shipping. At the same time, introducing new propulsion technologies entails considerable challenges. For example, when we first received the tender, neither the relevant regulations in their entirety nor the required permit specifications for the planned drive-system components were available.”

“As such, we are proud to once again lead the way in the implementation of innovative, environmentally friendly propulsion systems, and to put our expertise in the construction of highly complex research vessels to the test.”

In a company update, Brightoil said it is seeking professional advice for devising feasible plans to protect the interests of stakeholders, creditors and minority shareholders.