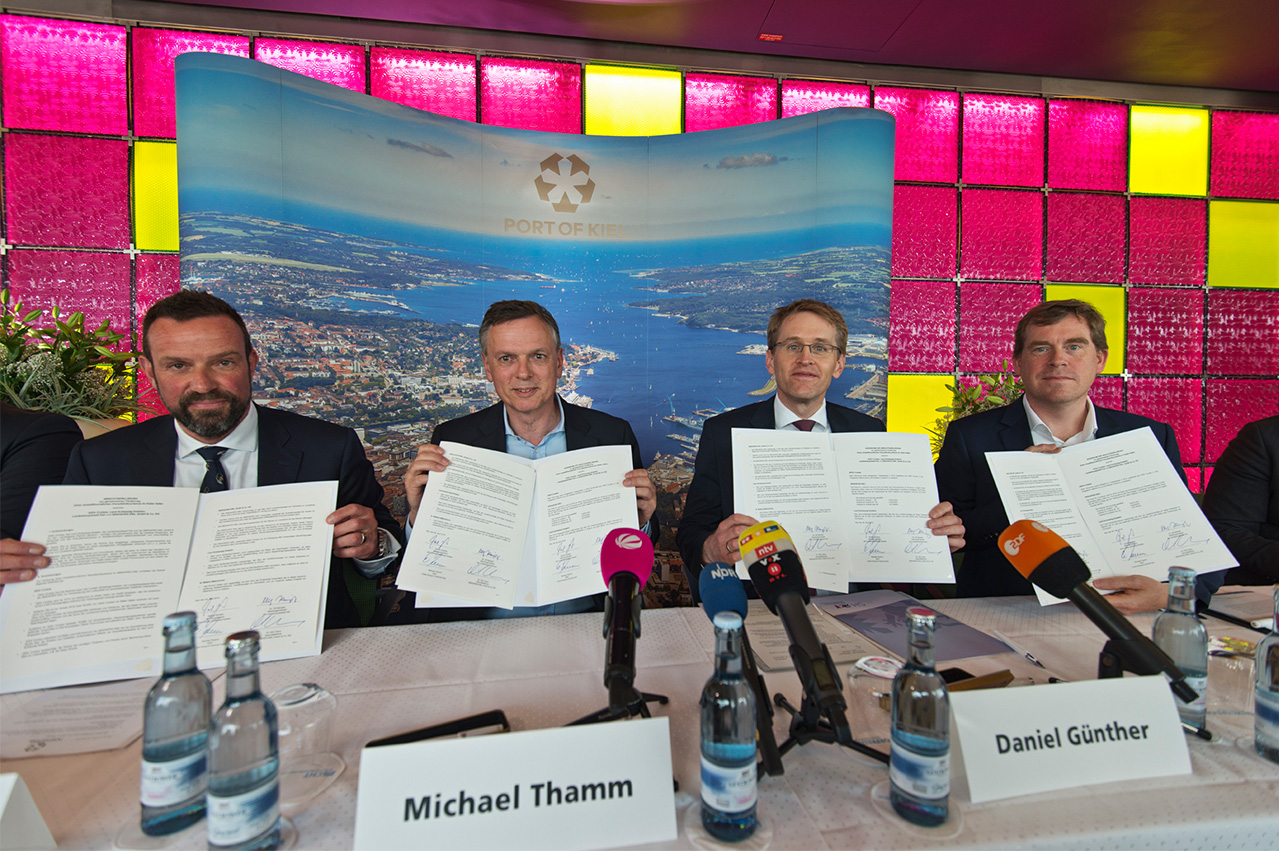 Costa Group subsidiary AIDA Cruises in late April entered into an enhanced collaboration agreement with the Federal State of Schleswig-Holstein, the Federal State capital Kiel, and the Seaport of Kiel to further develop and future-proof the maritime infrastructure in northern Germany.

The core points of the agreement include the construction of a shoreside power plant by SEE-HAFEN KIEL on the Ostseekai (Baltic Quay), the use of low-emission liquefied natural gas (LNG) to operate AIDA Cruises cruise ships while in port, and the use of modern exhaust gas cleaning systems.

In 2019, AIDAprima will be the first ship to call at the port of Kiel that can be supplied with LNG while docked.

Furthermore, AIDA Cruises will be fitting out two other cruise ships – AIDAbella and AIDAluna with shoreside power connections. The aim is for trial operations to begin in Kiel during 2019.

In addition, AIDA Cruises intends that, apart from ships that can be supplied with low-emission LNG or shoreside power while docked in port, it will also deploy cruise ships in the Seaport of Kiel that are fitted with modern exhaust gas cleaning systems.

The Federal State intends to financially support the planned construction of the shoreside power plant on the Ostseekai and will be examining grant options.

“Apart from the previously mentioned financial support for the provision of the necessary infrastructure in the ports and the prorated exemption of shoreside power from the levy imposed under the German Re-newable Energies Act, these measures most notably also include a port charges structure that favors low-emission alternatives,” says Federal State Secretary of the Environment, Tobias Goldschmidt.

“We have furthermore already called on the Federal Government to liaise with the EU Commission on uniform environmental standards – such as maxi-mum values for sulphur content in ship fuels (SECA standards) – in the territorial waters of the Member States.

“In addition, the foreseen designation of the Baltic, North Sea and English Channel as a NOx (nitrogen oxides) Emission Control Area (NECA) should be expanded to all EU waters.”

Ship owners will lock in higher emissions and cost decarbonisation pathways if they choose alternative fuels which will not be available at commercial scale in near future.

HSFO380 remains tight in Zhoushan and South Korea, and buyers should also expect longer lead times for the high sulphur grade in Fujairah.

Yang Ming will be the first shipping company in Taiwan that owns LNG-powered container ships, according to a statement from the Board of Directors.

“By working together as an industry, embracing fuel flexibility and consulting with expert partners,such as class, shipping can, and indeed must, reach its destination,” says the CEO of DNV Maritime.