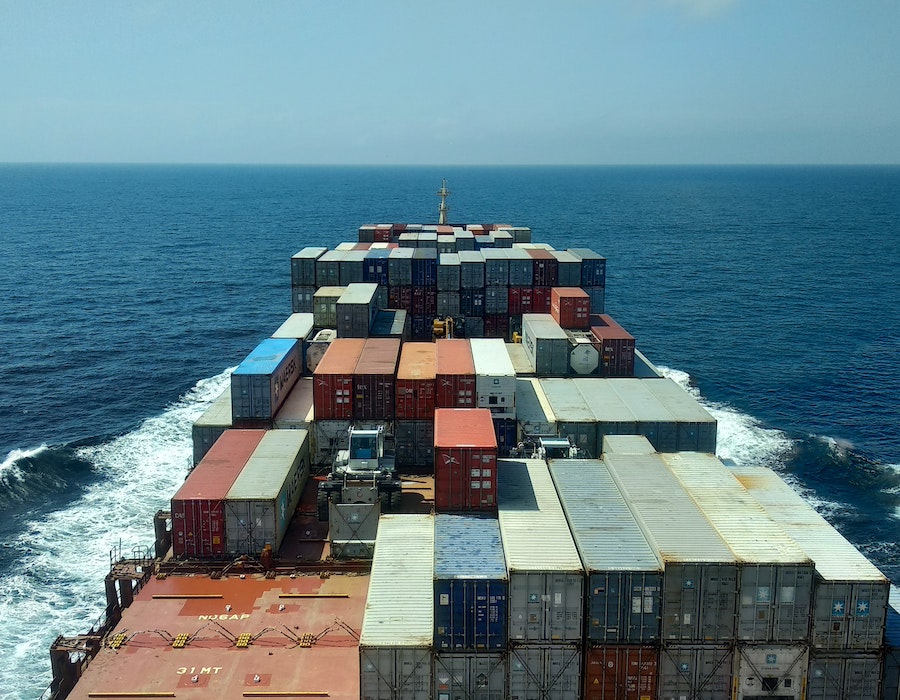 Think-ING, an online publication by Dutch multinational banking and financial services corporation ING on Tuesday (21 July) published an assessment on how the IMO2020 transition has impacted industry stakeholders, suggesting that the effects of Covid-19 have created a soft landing for the shipping industry; it was written by Warren Patterson, Head of Commodities Strategy.

We are now well into the IMO 2020 shipping regulations, and it is clear that all the hype leading up to implementation was exaggerated. Covid-19 has certainly softened the impact of the shipping industry’s move to a low sulphur compliant fuel

VLSFO the fuel of choice

As the shipping industry has moved further into 2020, and with the need to comply with new regulations to cap the sulphur content of fuel burned to 0.5% compared to 3.5% previously, it has become clearer that the fuel of choice for ship owners is very low sulphur fuel oil (VLSFO), rather than a marine gasoil. This is evident when looking at bunker fuel sales in Singapore, with VLSFO making up almost 70% of total fuel oil sales in the first six months of the year, this compares to around 11% when it comes to marine gasoil. Meanwhile, given the use of scrubbers on some vessels, high sulphur fuel oil (HSFO) sales made up around 18% of total sales.

In general, compliance with the new fuel regulations has been quite strong. Again, looking at Singapore ports, over the first quarter of this year, around 96% of ships entering the port were using a compliant fuel. Whilst those which were marginally over were likely due to residual HSFO in the tanks, rather than purposely using a non-compliant fuel. China plays a role in the VLSFO weakness

Despite the preference for VLSFO from the shipping industry, this has offered little support to VLSFO prices. While the flat price would have come under pressure anyway, given the weakness we have seen in oil prices, the fuel has been relatively weaker compared to other marine fuels, and in particular HSFO. The spread between VLSO and HSFO has narrowed significantly over the course of the year. Back at the end of last year the spot spread in NW Europe was trading as high as US$290/t, whilst so far this year it has traded briefly below US$45/t.

The initial weakness seen in VLSFO came after news that the Chinese government would waive a consumption tax, and provide a VAT rebate on fuel oil sales to bonded storage. This has seen refiners in the country increase VLSFO output as a result. According to government data, fuel oil output in the country over the first six months of the year totalled 17.48mt, up almost 53% year-on-year. On top of this, the government provided export quotas for VLSFO amounting to 10mt, with the potential for a further 5mt to be allocated later in the year.

These actions that we have seen from China do make it fairly clear that the country wants to reduce its dependence on fuel oil imports, as well as play a larger role in the global bunkering market, and this view is only strengthened with the Shanghai International Energy Exchange (INE) launching a VLSFO futures contract in June. 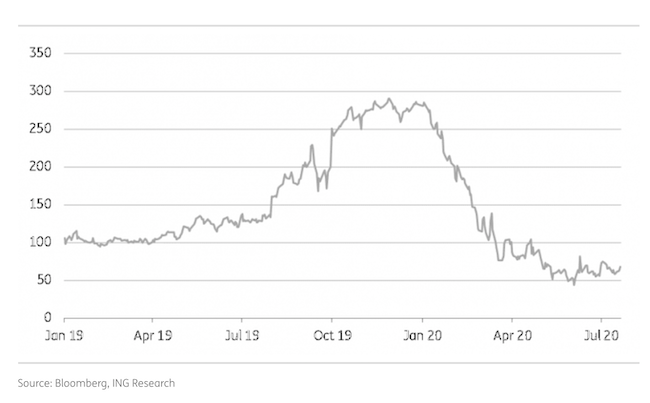 Weaker road fuel demand adds to the pressure for VLSFO

Covid-19 has only added further pressure to VLSFO, with road transportation having been hit significantly as a result of country lockdowns. This has meant that vacuum gasoil (VGO) which would have gone towards gasoline production has been diverted to bunker blending, given the fall away in gasoline demand. This has helped to ensure enough VLSFO availability for the shipping industry. However, with gasoline demand now in recovery mode, this should mean that we start to see increasing amounts of VGO diverted back towards gasoline production as we move through the remainder of the year, which should offer some relative support to VLSFO. The risk to this view though, is if the resurgence in Covid-19 cases that we are currently seeing does lead to strict lockdowns once again, which could weigh on demand for road transportation fuels.

While VLSFO has come under pressure as a result of developments in China and Covid-19, HSFO has held up much better, with HSFO cracks strengthening over much of the year. In fact in NW Europe, the HSFO crack has traded back to pre-IMO 2020 levels, recently trading at one stage to less than a US$6/bbl discount.

From a supply point of view, it is clear that refiners would have reduced HSFO yields as much as possible in the lead up to the new sulphur regulations, in anticipation of demand falling off a cliff. In OECD countries, we ended last year with residual fuel oil yields at 4.7%, down from 6.1% a year earlier.

However on the demand side, whilst ships with scrubbers installed would ensure some demand for HSFO, the real supportive factor for the HSFO market has been increased buying from US refiners. In recent months, complex refiners in the US have increased the use of HSFO as a feedstock, with large discounts to crude back at the end of last year supporting this move, whilst more recently, strength in sour crude grades as a result of OPEC+ cuts will likely continue to support HSFO as a feedstock. Looking at EIA data, residuum imports into the US over the first four months of the year averaged 329Mbbls/d, compared to around 95Mbbls/d over the same period last year. 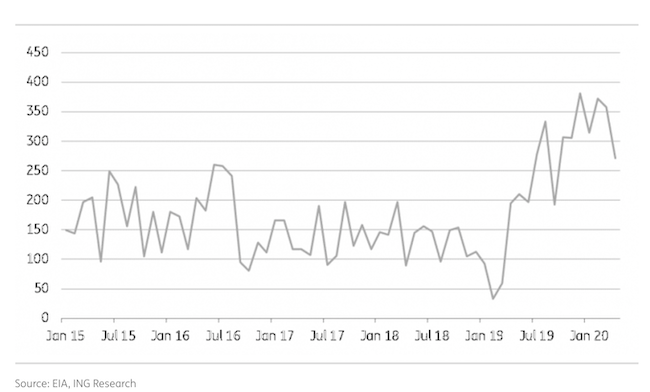 What does this mean for scrubbers?

Clearly, the significant narrowing in the VLSFO/HSFO spread does mean that many ship owners who had planned to install scrubbers, which would allow them to continue burning HSFO, will likely reconsider this decision, or at least delay installations until the spread widens once again. The payback period for the investment has increased drastically as the spread has collapsed. The payback period at the start of the year would have been in the region of one to two years, however with the spread now not too far off from US$50/t, this has increased to four to six years. Clarkson’s has said that the industry could see as many as 700 retrofits of scrubbers delayed or cancelled altogether as a result of the narrow spread.

There are reports that owners have already started to cancel scrubber installations, as a result of the weaker spread. The uncertainty created by Covid-19 will not have helped. This has not only delayed installations but also raised worries over the impact it will have on trade in the months ahead.

Guides contain details on Singapore’s implementation plan for IMO 2020 and outcome of MEPC 74.

MSC loans US $439 million for operation to acquire 86 scrubbers

Co-ordinating bank and agent BNP Paribas, together with a syndicate of four other banks, offered loan.

Organisation notes its member companies continuously highlight difficulties regarding the use of LSFO.