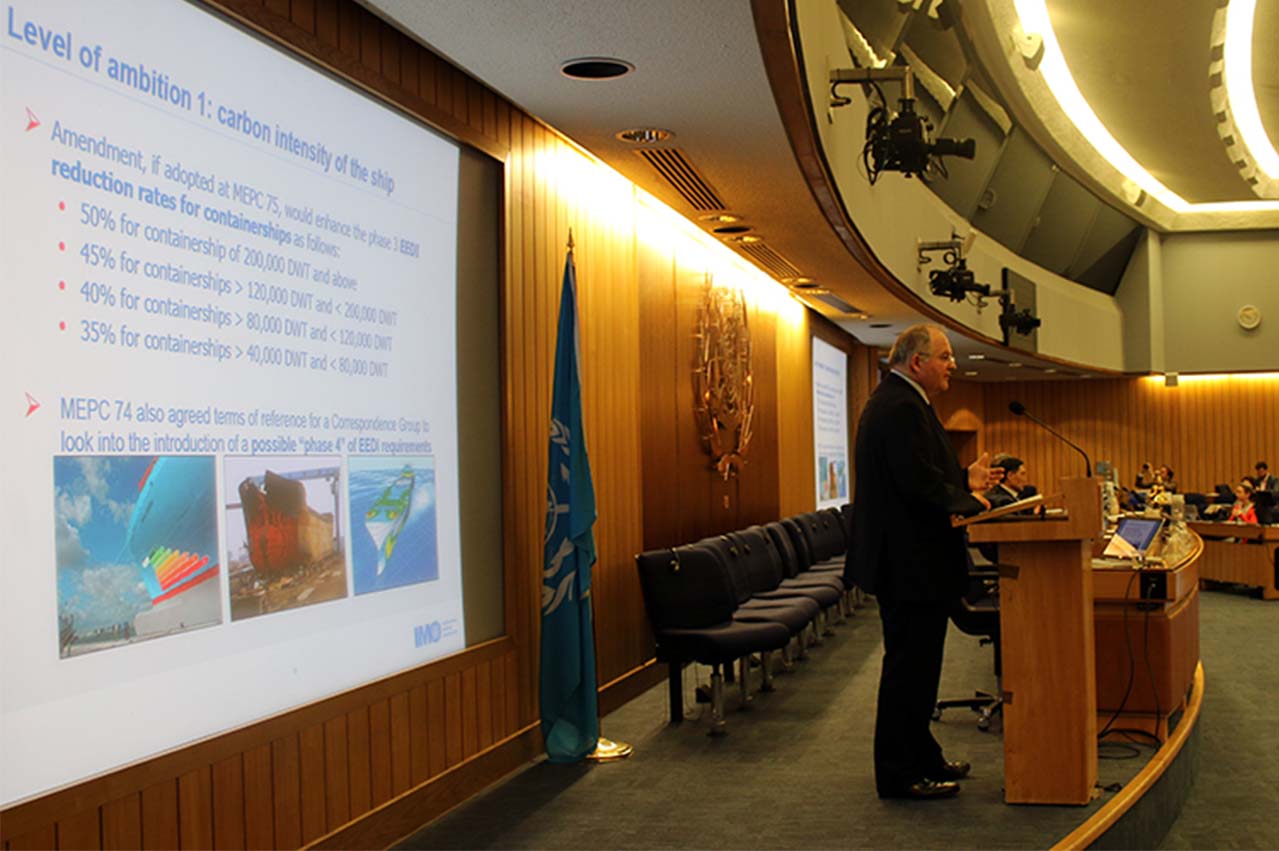 The following of the recent IMO Intersessional Working Group on Reduction of GHG Emissions from Ships has been provided by the International Maritime Organization:

IMO is committed to working to combat climate change, in line with the United Nations Sustainable Development Goal (SDG) 13 on climate action.

The working group agreed the draft text of a resolution to be put forward to the next Marine Environment Protection Committee (MEPC) for adoption. The text would urge Member States to develop and update a voluntary National Action Plan (NAP) with a view to contributing to reducing GHG emissions from international shipping.

It suggests such National Action Plans could include but are not limited to: (a) improving domestic institutional and legislative arrangements for the effective implementation of existing IMO instruments, (b) developing activities to further enhance the energy efficiency of ships, (c) initiating research and advancing the uptake of alternative low-carbon and zero-carbon fuels, (d) accelerating port emission reduction activities, consistent with resolution MEPC.323(74), (e) fostering capacity-building, awareness-raising and regional cooperation and (f) facilitating the development of infrastructure for green shipping.

The resolution would invite Member States to elaborate those arrangements (legal, policy, institutional, etc.) that they put in place or plan to do so to support emission reduction from ships, in accordance with their national conditions, circumstances and priorities.

The resolution would encourage those States which had already adopted national action plans to share their experiences with IMO.

The draft resolution will be submitted to the next Marine Environment Protection Committee session, MEPC 75 (30 March to 3 April 2020) with a view to its adoption.

IMO has already adopted mandatory technical and operational measures to improve the energy efficiency of ships and reduce GHG emissions, including the energy Efficiency Design Index (EEDI) for new ships and the Ship Energy Efficiency Management Plan (SEEMP) for all ships of 400 GT and above (read more here). The initial strategy lists a number of candidate measures which could also be considered to further reduce emissions and help achieve the targets in the strategy, in particular 40% reduction of carbon intensity from shipping by 2030.  Short-term measures could be measures finalized and agreed by the Committee between 2018 and 2023, although in aiming for early action, priority should be given to develop potential early measures with a view to achieving further reduction of GHG emissions from international shipping before 2023. Dates of entry into force and when the measure can effectively start to reduce GHG emissions would be defined for each measure individually. A procedure for assessing the impact on States of a measure has been approved.

During the working group session, a number of proposals were discussed.

The group noted that the proposals discussed fell into two goal-based approaches, a technical approach and an operational approach. Further discussion would be needed at the next intersessional working group meeting to develop such proposals further.

Proposals for a technical approach which were discussed included an Energy Efficiency Existing Ship Index (EEXI), which could require ships to meet set energy efficiency requirements after the measure taking effect. Other technical proposals relate to mandatory power limitation on ships.

Operational approaches would include focusing on strengthening the ship energy efficiency management plan, as required in SEEMP. This include proposals for mandatory carbon intensity reduction targets. Operational proposals also include measures to optimize speed for the voyage. Proposals to limit ship speed were also discussed.

The group agreed that the technical and operational approaches should be further developed in parallel, with informal coordination before the next intersessional meeting.

Assessment of impacts on States

Proponents of the various proposals were invited to provide further details on the initial impact assessment of their proposal, with a view to identifying the remaining issues to be further considered, including whether the proposed measure may generate disproportionately negative impact on some States. Key underlying issues identified by the chair for further consideration included, inter alia: the vital role of shipping for food security and disaster response; the impact on cost of transport and if cost change can be passed on to the customer or not; and special challenges faced by some remote areas.

With a longer-term perspective, and in order to encourage the uptake of alternative low- and zero-carbon fuels in the shipping sector, the Working Group also agreed on the establishment of a dedicated workstream for the development of lifecycle GHG/carbon intensity guidelines for all relevant types of fuels. This could include, for example, biofuels, electro-/synthetic fuels such as hydrogen or ammonia, etc. Many participants to the meeting highlighted the importance of undertaking this work as soon as possible, in order to pave the way for the decarbonization of the shipping industry.

The sixth session of the Intersessional Working Group on Reduction of GHG Emissions from Ships met 11-15 November at IMO Headquarters in London, United Kingdom. It was attended by nearly 400 representatives from nearly 70 Member States, as well as from the UNFCCC, the European Commission, the League of Arab States and around 30 non-governmental organizations.

To keep up the momentum, a further seventh meeting of the Intersessional Working Group on Reduction of GHG Emissions from Ships will be held 23-27 March 2020. This is just before and back to back with the next Marine Environment Protection Committee session, MEPC 75 (30 March to 3 April 2020). The MEPC is the decision-making body.

The MEPC is also expected to establish a Working Group on Reduction of GHG Emissions from Ships, to meet during the MEPC session.

The Fourth IMO GHG Study will include the following:

“In our 19 years in oil and shipping, we have never supplied 4 million tonnes of marine fuels this early in the year,” it states.

Company highlights a common and unhelpful misconception of EU MRV and IMO DCS.

Commission, however, yielded to pressure to remove the obligation on ships to collect and report cargo data.