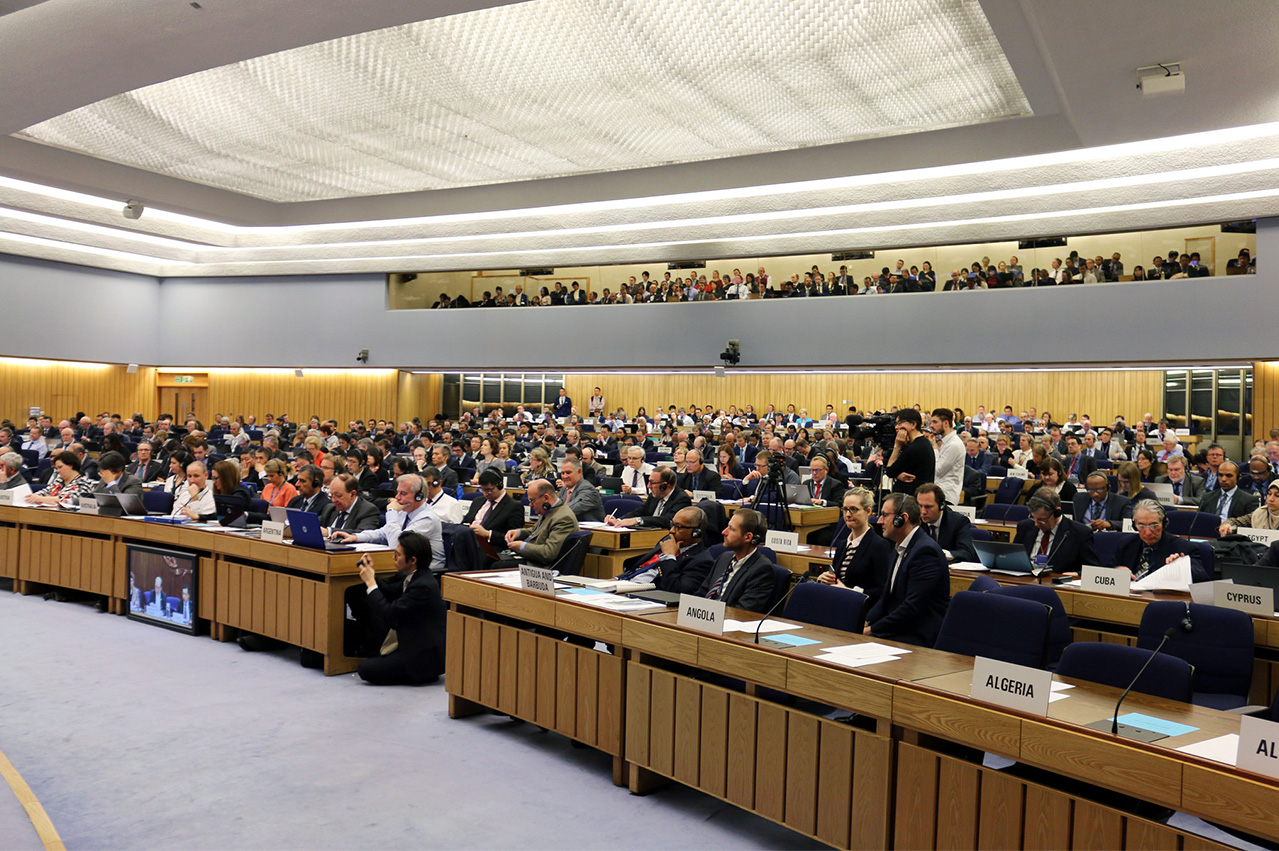 The below is a statement from the International Maritime Organization:

Nations meeting at the United Nations International Maritime Organization (IMO) in London have adopted an initial strategy on the reduction of greenhouse gas emissions from ships, setting out a vision to reduce GHG emissions from international shipping and phase them out, as soon as possible in this century.

The vision confirms IMO’s commitment to reducing GHG emissions from international shipping and, as a matter of urgency, to phasing them out as soon as possible.

More specifically, under the identified “levels of ambition”, the initial strategy envisages for the first time a reduction in total GHG emissions from international shipping which, it says, should peak as soon as possible and to reduce the total annual GHG emissions by at least 50% by 2050 compared to 2008, while, at the same time, pursuing efforts towards phasing them out entirely.

The strategy includes a specific reference to “a pathway of CO2 emissions reduction consistent with the Paris Agreement temperature goals”.

The initial strategy was adopted by IMO’s Marine Environment Protection Committee (MEPC), during its 72nd session at IMO Headquarters in London, United Kingdom. The meeting was attended by more than 100 IMO Member States.

The initial strategy represents a framework for Member States, setting out the future vision for international shipping, the levels of ambition to reduce GHG emissions and guiding principles; and includes candidate short-, mid- and long-term further measures with possible timelines and their impacts on States. The strategy also identifies barriers and supportive measures including capacity building, technical cooperation and research and development (R&D).

IMO Secretary-General Kitack Lim said the adoption of the strategy was another successful illustration of the renowned IMO spirit of cooperation and would allow future IMO work on climate change to be rooted in a solid basis.

He told delegates, “I encourage you to continue your work through the newly adopted Initial GHG Strategy which is designed as a platform for future actions. I am confident in relying on your ability to relentlessly continue your efforts and develop further actions that will soon contribute to reducing GHG emissions from ships.”

According to the “Roadmap” approved by IMO Member States in 2016, the initial strategy is due to be revised by 2023.

Continuing the momentum of work on this issue, the Committee agreed to hold the fourth Intersessional meeting of the Working Group on Reduction of GHG emissions from ships later in the year. This working group will be tasked with developing a programme of follow-up actions to the Initial Strategy; further considering how to progress reduction of GHG emissions from ships in order to advise the committee; and reporting to the next session of the MEPC (MEPC 73), which meets 22-26 October 2018.

‘We must remain diligent in our examination of LNG’s pathway to bio and synthetic LNG, as well as all future alternatives showing promise and potential,’ says SEA-LNG.

Bunker tanker Carlung was providing marine fuel to the containership when spill occurred in morning.

Vessel was developed in collaboration with the Kongsberg Group (KONGSBERG) and built by VARD with financial support from Enova.