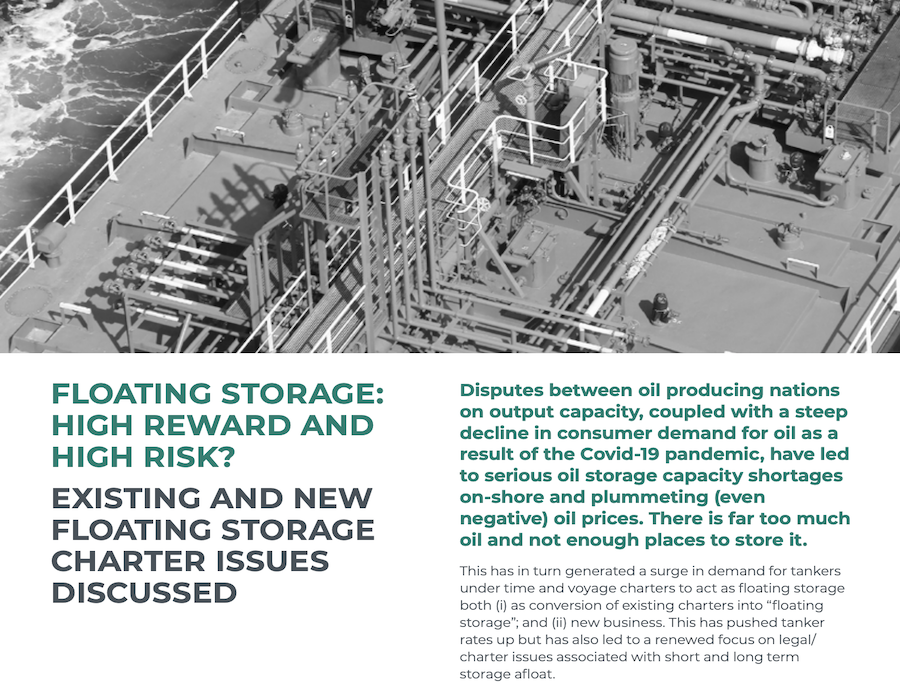 Rory Butler, Partner and William Gidman, Senior Associate at global law firm HFW, have recently published a briefing on some new and existing issues that may arise out of the surge in demand for tankers to act as floating storage due to the shortage in oil storage capacity and the collapse in oil prices:

Disputes between oil producing nations on output capacity, coupled with a steep decline in consumer demand for oil as a result of the Covid-19 pandemic, have led to serious oil storage capacity shortages on-shore and plummeting (even negative) oil prices. There is far too much oil and not enough places to store it.

This has in turn generated a surge in demand for tankers under time and voyage charters to act as floating storage both (i) as conversion of existing charters into “floating storage”; and (ii) new business. This has pushed tanker rates up but has also led to a renewed focus on legal/charter issues associated with short and long term storage afloat.

Rory Butler and William Gidman have reviewed a number of existing and new charters over the last few weeks and advised both owning and charterer clients on storage/charter issues. With VLCC hire rates reported at well over US$100,000 a day (some reports have been as high as US$200,000-US$300,000 a day) these charters have potential annual values of US$40 million plus and so the sums at stake are large.

With higher rates, disputes can escalate quickly. What might previously have been a modest 2-3 days off-hire, demurrage or damages claim may easily be worth a few hundred thousand dollars now. It is therefore wise to focus on agreeing terms that allocate the additional risks associated with floating storage even if there is a commercial need to conclude such deals quickly!

Whilst this article focuses on the position under charterparties, it should be remembered that where the charterers are different from the cargo interests under bills of lading, floating storage really requires three-party discussions.

We have dealt with enquiries under existing and new charters and refer below to some of the issues arising.

Safety of the storage place

The issues arising out of floating storage are not straightforward, and charters cannot be looked at in isolation. Consideration should also be given to bills of lading, sales contracts and insurance provisions.

We would suggest that even where charterers do not necessarily intend to use the vessel for floating storage at the outset of a new charter, it would be prudent in the current market conditions to always build in a floating storage option to every charter to give maximum commercial future flexibility and avoid potential disputes.

If floating storage is envisaged under an existing charter that had not previously contemplated such action, then it is recommended to agree an addendum to expressly deal with these issues.

Rory and William are available to discuss drafting suitable provisions, and also to discuss any disputes that may arise.

In the meantime, a link to a table of drafting tips for time and voyage charters on the HFW website can be found here

A full copy of the briefing is available for download here.

New barge will be a sister vessel to the liquefied natural gas (LNG) bunker barge Clean Canaveral which will be delivered to affiliate Polaris in mid-November.