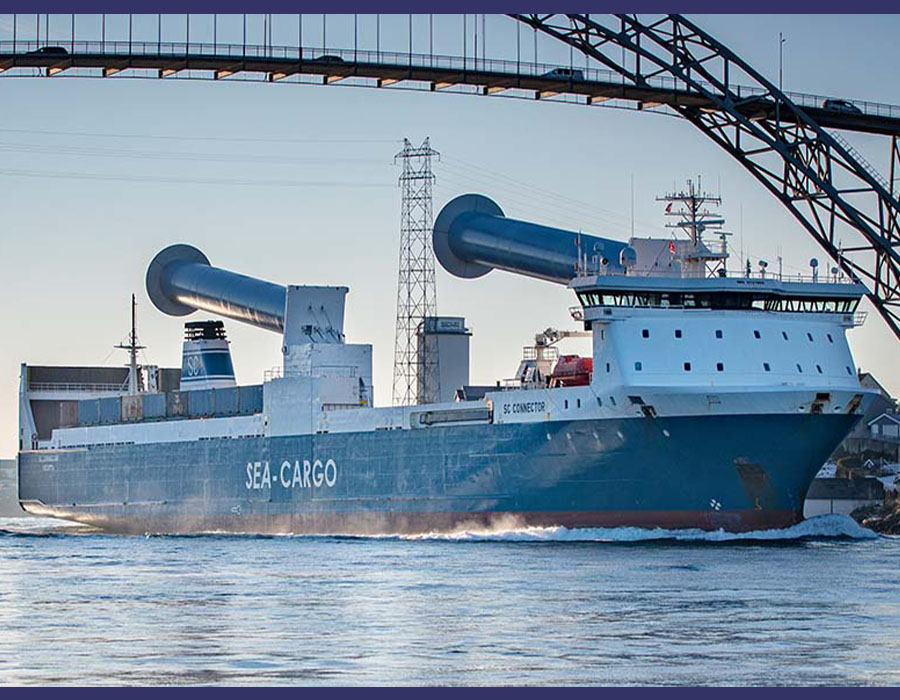 The shipping industry is rediscovering the propulsive potential of wind as the IMO trajectory towards 2050 and rising fuel prices underline the need to cut fuel consumption and carbon output. Various projects are now underway to study the feasibility for commercial vessels.

Ship watchers in ports around the world are beginning to wonder: What are those funny-looking structures on the deck of some vessels? Tall columns looking like over-dimensioned funnels, or appendages reminiscent of airplane wings?

They are looking at modern sails – innovative designs using the latest scientific findings to propel ships. A surprising number and variety of wind-assisted propulsion system (WAPS) projects, often supported by government programmes, are taking shape, driven by the realization that the shipping industry must decarbonize. While it remains unclear what fuels and technologies will be available to power the ships of a carbon-neutral future and what the costs will be, wind-assisted propulsion is one of several technologies available to forward-looking stakeholders today to reduce the carbon footprint of ships and buy time to identify and develop the next-generation power source.

“A lot of WAPS development work has been done in recent years, largely unnoticed by the mainstream,” says Uwe Hollenbach, Principal Engineer at DNV. “Now the industry is beginning to realize that there are limits to what you can achieve with slow steaming and other efficiency-enhancements – you have to think beyond.”

Initiatives and joint projects dedicated to wind are springing up everywhere. Conferences, studies and papers urge the shipping world to embrace wind-assisted propulsion. IMO recently updated the calculation modalities for the EEDI and EEXI to give WAPS systems a higher, more realistic benefit.

There is definitely a new dynamic in this segment, and indeed a new sense of seriousness. “Wind is an inexhaustible energy source – a bit random perhaps, but definitely powerful enough to re-consider,” says DNV’s top sailing expert, Senior Principal Engineer Hasso Hoffmeister. “You basically can’t go wrong with wind – it’s free, it’s zero-carbon, and there are any number of retrofitting options available today with many of them quite easy to install. What is more, wind will always be available in suitable regions at no cost – it gives you a certain planning reliability and independence from the supply and price fluctuations of combustible fuels.”

There are a few basic factors to consider when contemplating wind-assisted propulsion, says Uwe Hollenbach:

– The operating region should be windy enough. Winds in tropical waters tend to be less dependable than those in middle and higher latitudes.

– Some ship types are better suited for WAPS than others. Smaller ships can choose from a wider range of systems. Larger ships are often more restricted due to the air drag reducing the efficiency of sail systems. Ships carrying deck cargo require new concepts for arranging sail  systems efficiently.

– A Hazard Identification study (HAZID) is highly recommended before launching a WAPS project. Masts and sails must clear bridges and cranes and be protected against severe weather and sea conditions. They will influence the operation and  handling of the ship, the line of sight, and safety.

– Planning newbuilds for WAPS is better than retrofitting; it allows designers to include stability and efficiency considerations and electric power needs, and include the WAPS as part of a hybrid propulsion system to make the most of the investment

Fuel savings and emission reduction values reported by existing vessels with wind-assisted propulsion systems range widely due to these factors. “DNV has comprehensive wind expertise and simulation tools. As an independent third-party we can predict the auxiliary propulsion power and fuel savings of a proposed design and calculate the EEDI or EEXI,” says Hasso Hoffmeister. DNV has developed a standard for certification of WAPS systems and awarded Class Approvals in Principle (AiP) to a number of WAPS systems on the market.

The most popular and least-risk WAPS technology available for commercial ships today is rotor sails, also called Flettner sails after their 1920’s inventor, says Hoffmeister. State-of-the-art, computer-controlled implementations have delivered fuel savings between 4.5 per cent and have the potential to reach 25%, on smaller vessels. Rotor sails are relatively easy to retrofit on ferries, car carriers, multipurpose vessels, bulk carriers and tankers.

For example, Norsepower retrofitted two DNV-certified rotor sails on a product tanker, enabling fuel savings of 8.2 per cent. Since then, two hybrid ferries have received DNV certified Flettners, and the biggest vessel fitted with rotor sails to date, a bulk carrier, has five units, which can be tilted down for cargo operations. Its estimated fuel savings is 8 per cent. The DNV-classed RoRo carrier SC Connector’s two Flettners, expected to reduce the ship’s emissions by 25 per cent, can likewise be tilted to let the ship pass under bridges. Verification measurements are in progress.

Eco Flettner’s first project, the MPV Fehn Pollux with a single rotor sail, surpassed all expectations with measured average fuel savings of up to 10–12 per cent. Another player in the Flettner community, London-based Anemoi Marine Technologies Ltd., has retrofitted four rotor sails on a bulk carrier and will also run through the certification process of DNV. Mounted on sliding rails, the rotors can move out of the way of dock cranes. The Flettner principle is gaining in popularity: DNV recently awarded an AiP to a rotor sail system developed by DSME in Korea.

Meanwhile, innovative sail types originally invented for racing have arrived in the cargo shipping arena, and major shipping companies are showing a willingness to give these technologies a chance. BAR Technologies in Portsmouth, UK and Yara Marine Technologies have developed a solid wing sail system called WindWings, which received a DNV AiP in November 2021. Modelled after airplane wings, WindWings are designed to be installed in groups of two to five and are fully computer-controlled. According to BAR Technologies, they can reduce a vessel’s CO2 emissions by up to 30% on average.

“Developing new wind propulsion technology for the marine industry, where safety is of course of paramount importance is not a simple task. Working with DNV on the earliest installations of WindWings has been extremely important and beneficial to us. The professional approach and structure to the AiP and design approvals has focused our work on reliability and safety in addition to performance,” says John Cooper, CEO BAR Technologies.

WindWings are collapsible to allow the ship to pass under bridges and ensure free access to cargo hatches. BAR Tech, the multinational food company Cargill and others have formed a partnership to retrofit the first WindWings on a large Cargill dry-bulk carrier late 2022. Cargill has announced plans to charter at least 20 new wind-assisted ships over the coming years.

Wing sails can reduce environmental footprint by up to 45%

DNV also granted an AiP to the AYRO Oceanwings 3.6.3 wind-assisted propulsion system developed by VPLP Design. A 121-metre RoRo vessel scheduled for delivery in 2022, will feature four automated Oceanwings wing sails. They are expected to reduce the vessel’s environmental footprint by 20–45 per cent.

AlfaWall Oceanbird, a joint venture between Wallenius and Alfa Laval, develops airplane wing-type rigid wing sails for wind propulsion and wind assistance. The whole Oceanbird concept, which includes wing sails, a specially designed hull and speed/route recommendations, is able to reduce emissions by up to 90 percent. “So much has changed with technology since we last looked at sail power for propulsion,” Niclas Dahl, Managing Director, AlfaWall Oceanbird reflects. “Automation, sensors, material technologies, route planning, weather forecasts, all of this together makes it possible to look at wind propulsion in a totally new light. It allows us to do things that we could not have done 15 years ago.”

Suction wing sails increase the “lift” effect of the airfoil by using a fan inside the wing to suck air from the boundary layers around it through a matrix of small holes. The technology, first implemented successfully by Jacques-Yves Cousteau on his ship Alcyone, has been optimized by eConowind. Two mobile, container-mounted units have been furnished for two general cargo ships, and similar projects have been realized in Spain.

Kites are seeing a renaissance: A six-month sea trial of an innovative automated kite sail is to begin some time in 2022 when Airseas, an Airbus spin-off, will deploy a half-sized “Seawing” demonstration kite onboard a RoRo vessel. An LNG-powered bulk carrier with a Seawing kite system is scheduled for delivery in 2024.

As performance data from all these and other WAPS projects come in, it will be fascinating to see the monetary benefits black on white. What is more, wind-assisted propulsion can make a newbuilding project more attractive for green financing schemes. Carbon taxation and tightening decarbonization goals will enhance the appeal of wind propulsion. The good news, says Jan-Henrik Hübner, Global Head of Shipping Advisory at DNV, is that the economic feasibility limit has already been reached and crossed, considering today’s fuel prices and the maturity of WAPS technologies: “Every tonne of fuel an operator doesn’t have to buy is extra profit.” Wind, after all, is money!