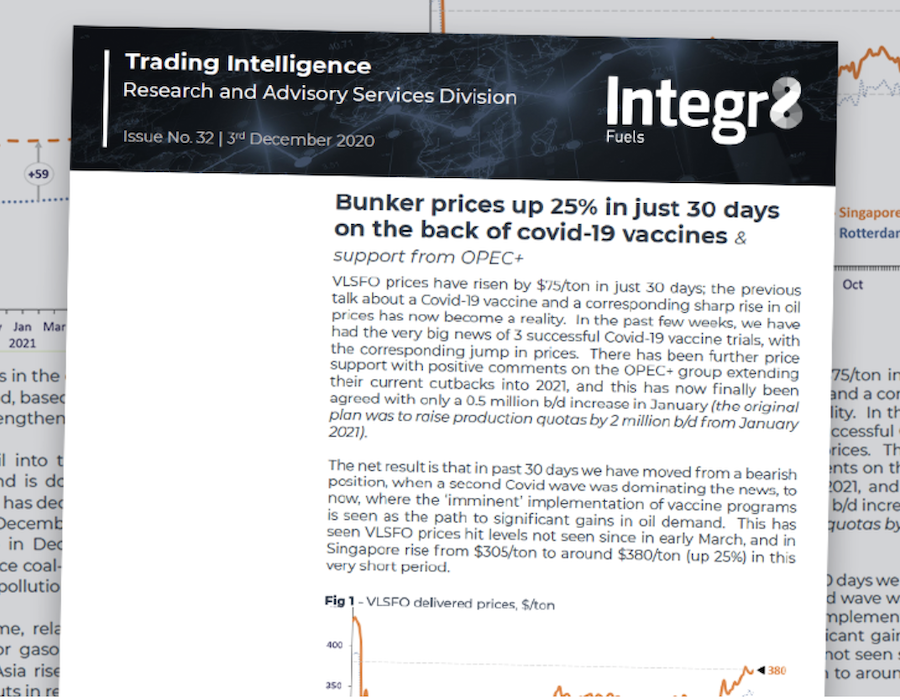 Integr8 Fuels, the bunker trading and brokerage arm of Navig8, on Thursday (3 December) published an analysis on the market forces behind the rise in bunker prices after OPEC+’s well received announcement to extend existing supply cutbacks as well as successful Covid-19 vaccine trials:

VLSFO prices have risen by $75/ton in just 30 days; the previous talk about a Covid-19 vaccine and a corresponding sharp rise in oil prices has now become a reality. In the past few weeks, we have had the very big news of 3 successful Covid-19 vaccine trials, with the corresponding jump in prices. There has been further price support with positive comments on the OPEC+ group extending their current cutbacks into 2021, and this has now finally been agreed with only a 0.5 million b/d increase in January (the original plan was to raise production quotas by 2 million b/d from January 2021).

The net result is that in past 30 days we have moved from a bearish position, when a second Covid wave was dominating the news, to now, where the ‘imminent’ implementation of vaccine programs is seen as the path to significant gains in oil demand.  This has seen VLSFO prices hit levels not seen since in early March, and in Singapore rise from $305/ton to around $380/ton (up 25%) in this very short period. 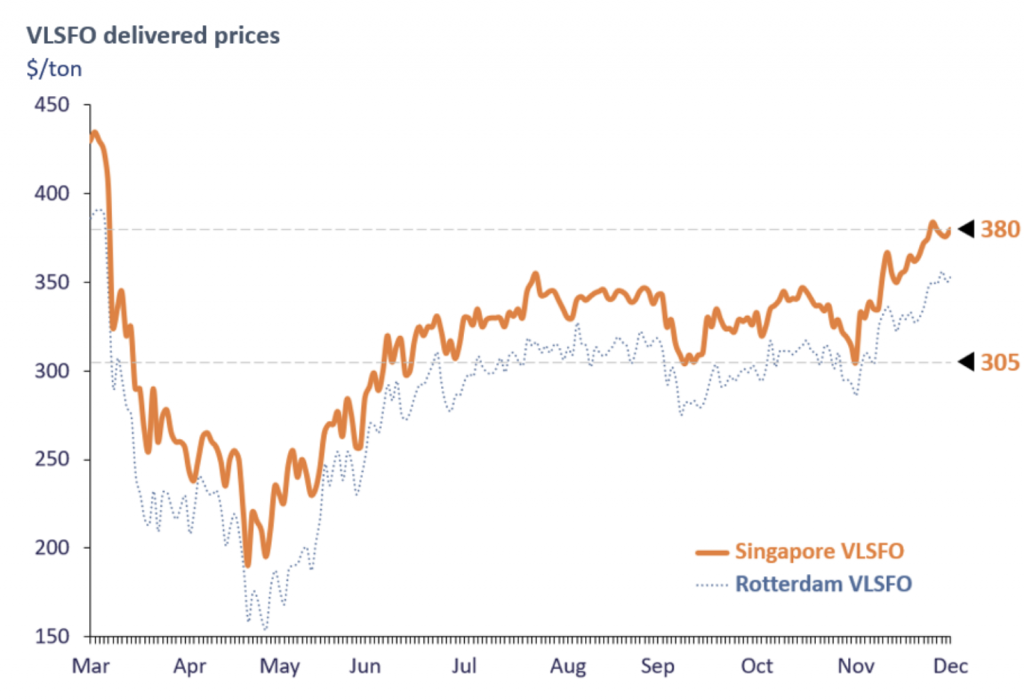 At the same time forward curves have jumped higher, although they remain extremely flat through the next 18 months.  The Singapore VLSFO curve at the start of November was a clear reflection of the near-term bearish concerns from the second covid-19 wave, showing a drop in December and only a gradual uplift through the outlook period.  The recent news on vaccines had an immediate bullish impact on prices and now for the earlier part of next year, the VLSFO forward curve in Singapore is almost $60/ton higher than it was four weeks ago.  Even looking as far out as 2022, the curve is still more than $40/ton above what it was showing at the start of November. 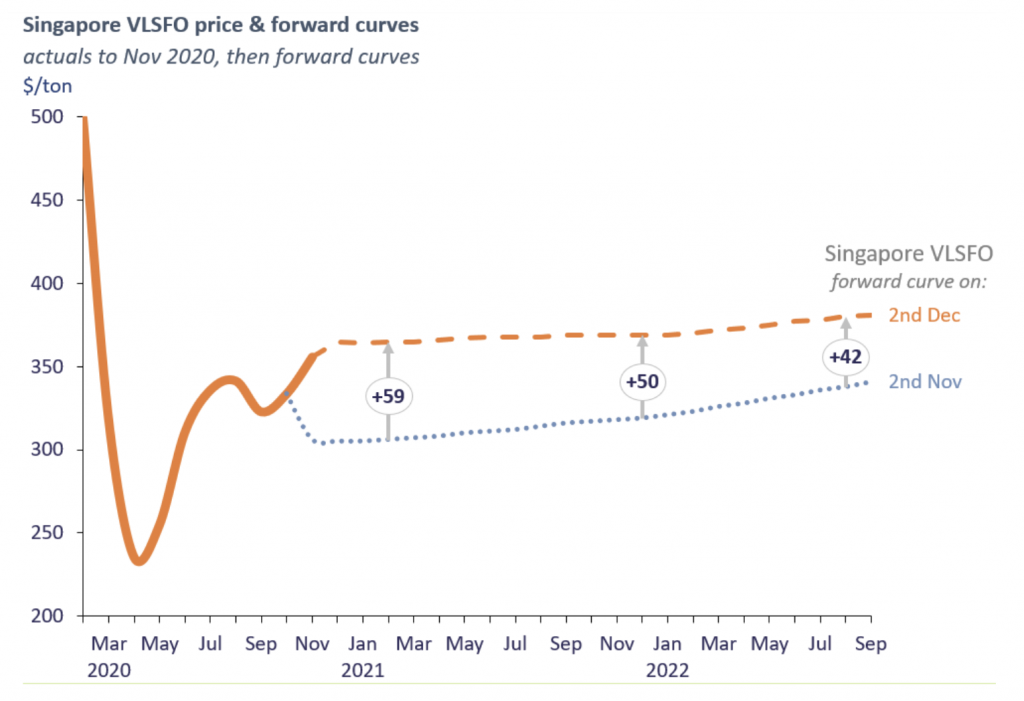 Another aspect to the price rise has been a widening in the VLSFO/HSFO spread.  Differentials tend to widen as prices rise (and narrow as prices fall), and this has happened with this latest price increase.  Although the differential between the two bunker grades is still very narrow by historical standards, the VLSFO/HSFO spread in Singapore is now around $70/ton compared with only $53/ton at the start of November. 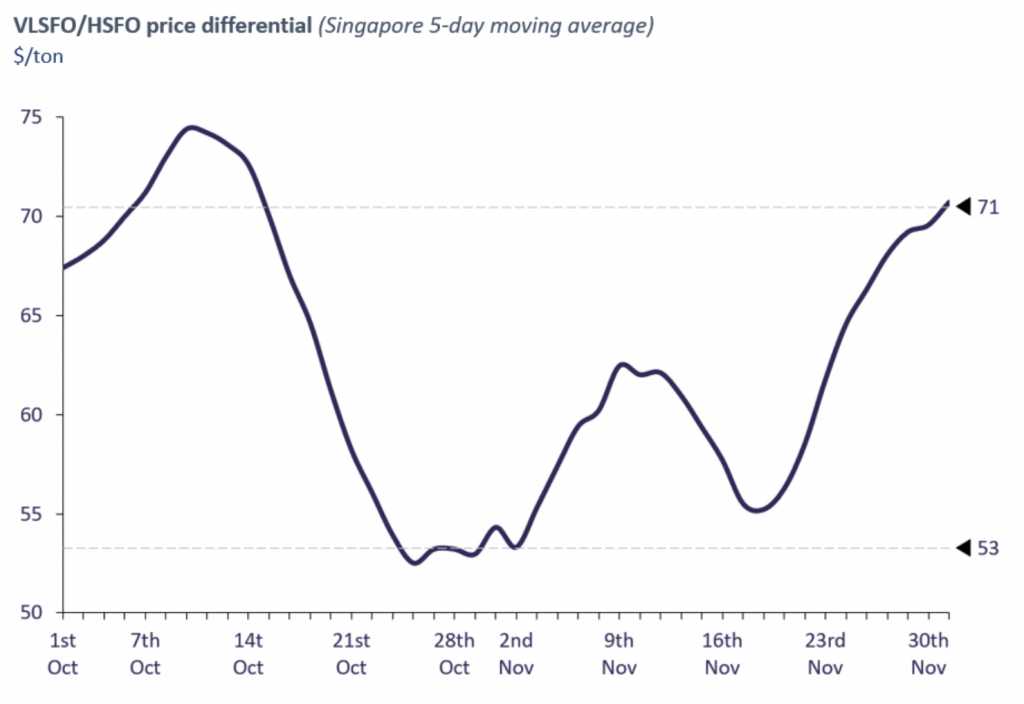 General developments in the oil markets would indicate a further widening in this spread, based on the relative weakening of HSFO prices and relative strengthening of VLSFO as:

Any further increases in oil prices are likely to add to these general widening pressures on the VLSFO/HSFO spread, lending further support to scrubber economics.

We have always referred to the underlying movements in bunker prices being led by crude oil, and of course it is the same this time around.  VLSFO has largely tracked changes in the hugely traded Brent and WTI crude futures markets, and will continue to respond to the current big stories of vaccines, the prospects for oil demand and OPEC+ outcomes.

Club offers practical advice for bunkering operations, and handling mandatory sampling which is taken during the bunker supply operation in the presence of all parties.