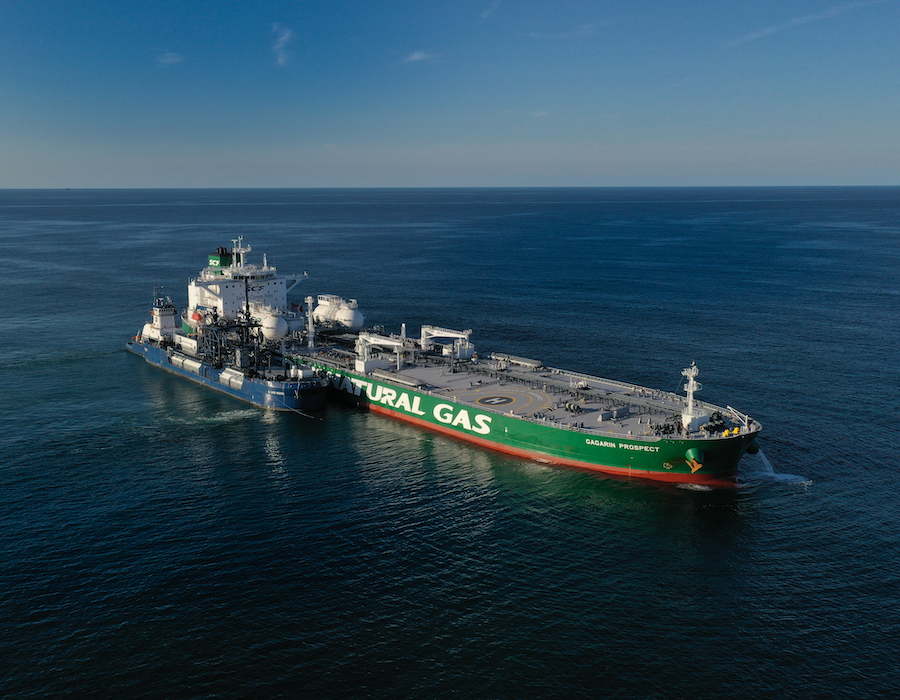 Sovcomflot and Shell on Monday (15 March) broke new ground, with the completion of the first ever Aframax tanker fuelling using liquefied natural gas (LNG) in the USA.

Sovcomflot’s Gagarin Prospect, on long-term charter to Shell, was en-route from Corpus Christi to Europe.  She received 1,075 cubic metres of marine LNG from the Shell NA LNG LLC chartered Q-LNG 4000 outside the Port of Canaveral, Florida. This represented the first ever ship-to-ship LNG fuelling of a large capacity Aframax tanker in the USA.

This event demonstrates the rapid expansion of LNG bunkering infrastructure globally, according to Sovcomflot. The deviation from the vessel’s usual voyage route amounted to less than 150 nautical miles (0.5 days) and the bunkering time was 11 hours.

Gagarin Prospect is the lead vessel in SCF Group’s pioneering series of dual fuelled ‘Green Funnel’ Aframax tankers, delivered in 2018/2019, and one of two in the series on long-term time charter to Shell.

The continued expansion of LNG fuelling in the United States facilitates the growing use of vessels able to utilise LNG in their main engines, auxiliaries and boilers, providing for a much reduced emissions’ footprint compared with conventionally fuelled tankers.

“This is another important milestone highlighting the progress of the сombined efforts of Shell and Sovcomflot to reduce the environmental impact of energy shipping. Our work started back in 2018, with the first marine LNG fuelling operation of Gagarin Prospect in the Port of Rotterdam.  The current LNG-bunkering confirms the leadership position of Sovcomflot in “green” shipping and our responsible approach to environmental safety, which lies at the heart of SCF’s activity. We are investing significant efforts to the transition of our fleet towards energy efficiency and the use of cleaner fuels.

“We are pleased that Shell has opened up LNG fuelling along this important transatlantic trade route, demonstrating that marine LNG fuelling infrastructure is no longer limited to hubs in Northern Europe and Singapore.

“It is symbolic that the bunkering took place at the Port of Canaveral, being the space hub of the United States of America, involving the Russian tanker Gagarin Prospect named after Planet Earth’s first cosmonaut.”

“As part of Shell’s target to be a net-zero emissions energy business by 2050, in step with society, we are working with customers across every sector to help them decarbonize. LNG is the choice today for new builds to help slow the rate of global greenhouse gas emissions while we work hard at developing zero-emissions fuels. I’m pleased to see the first Aframax tanker fuelled with LNG in the United States as this is an important milestone for the industry.” 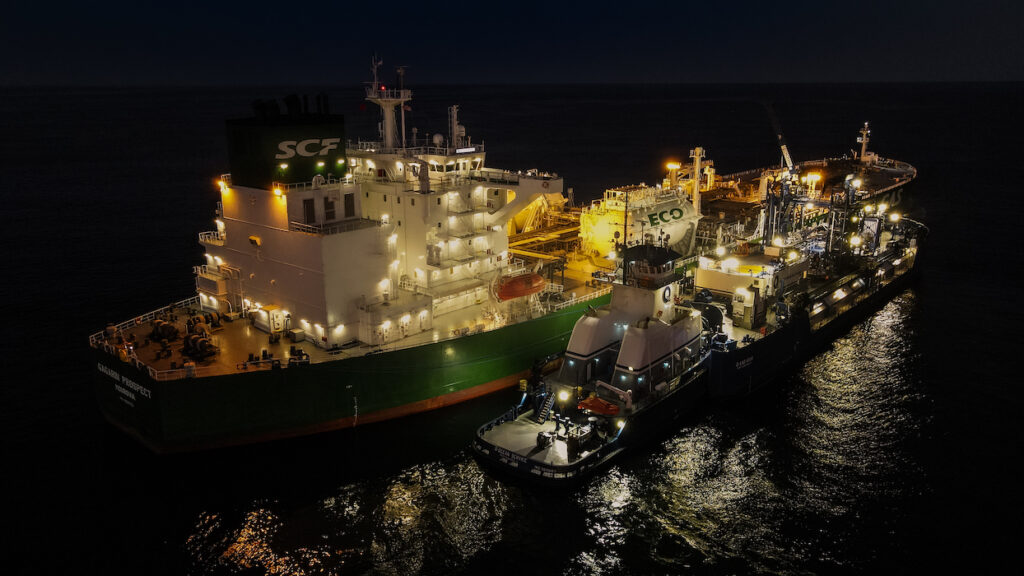 A total load of 72 metric tonnes of LNG bunker fuel was delivered using four trucks to the dredger on behalf of the Finnish gas supply company GASUM, it said.

Both firms signed a mutual cooperation MOU on the LNG value chain business in late August.

From the terminal, Gasum is to supply LNG to cargo and passenger shipping company Wasaline’s new LNG-fueled ferry and to Wärtsilä’s new Smart Technology Hub .

CMA CGM Jacques Saade is the first of nine 23,000-TEU boxships ordered by Rodolphe Saadé in 2017.