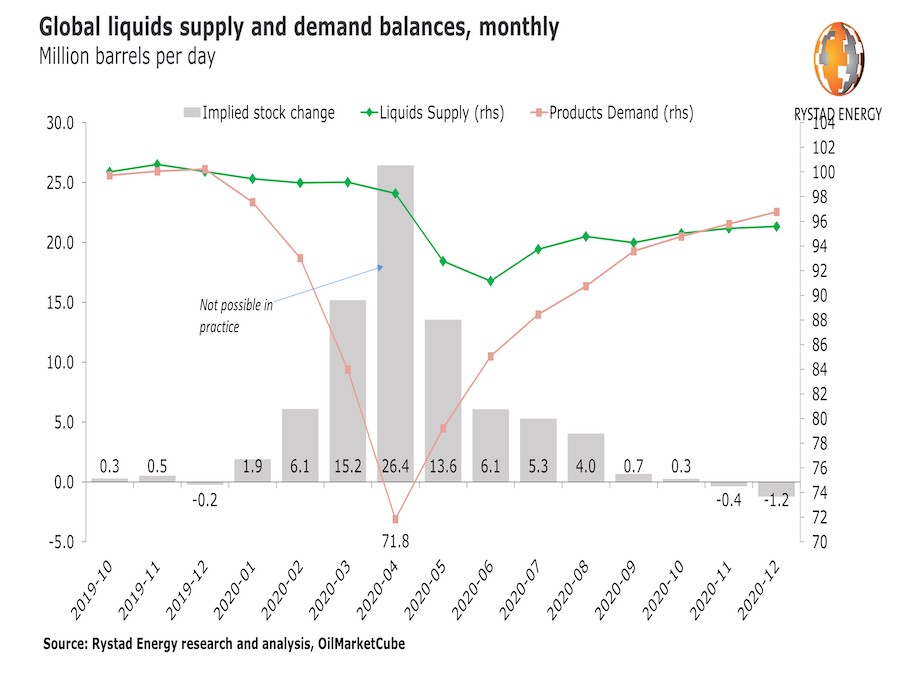 Independent energy research and business intelligence company Rystad Energy on Thursday (30 April) published its forecast for the aftermath and recovery of the global oil market post Covid-19 pandemic for the short term and long term:

Some good news: The global imbalance between oil supply and demand, which has built to 26.4 million barrels per day (bpd) in April due to the Covid-19 pandemic, is set to halve to 13.6 million bpd in May and fall further to just 6.1 million bpd, according to a Rystad Energy analysis. However, despite the improvement, the stock build will still overwhelm remaining global storage, which will fill in weeks.

Global supply is expected to fall in May to 92.8 million bpd, from 98.3 million bpd in April, and further decline to 91.1 million bpd in June. We expect June to see the lowest supply level this year unless further production cuts are announced, with output rebounding from July.

Demand on the other hand, which Rystad Energy estimates will reach its lowest point at 71.8 million bpd in April, will rise to 79.2 million bpd in May and to 85.1 million bpd in June, as governments ease Covid-19-related restrictions and some industrial activity resumes.

This supply figure already includes the cumulative 6.5 million bpd cuts we expect from OPEC+ countries, as well as more than 2 million bpd of production shut-ins from non-OPEC countries (such as Norway) suffering under the unprecedented market squeeze.

“While this may seem like a drastic improvement from April, the oil market is not magically fixed. The storage issue still looms large and will spill over onto trading floors, as buyers are left with crude they cannot physically cannot place, and into the boardrooms of oil companies which must make very costly but necessary decisions to scale back production and give the market some breathing space,“ says Rystad Energy oil market analyst Louise Dickson.

The demand-supply gap will become narrower in practice as we believe the market will be forced to tighten the stock build gap during May when countries run out of local storage. After local storage is exhausted, tankers will be packed with oil barrels seeking refuge in the country with the most remaining storage capacity – the US.

Until this gap is filled by additional shut-ins (possibly even within OPEC+ countries themselves), we can expect further downward pressure on oil prices, especially those that lack a clear conduit to the export market.

If sufficient production isn’t shuttered by 19 May 2020 (the expiration of the WTI June 2020 contract), then the potential remains for another nightmare WTI price collapse, which we do not rule out spreading to other crude blends. However, given that most oil futures outside of WTI do not require the buyer to physically take oil delivery, and instead have cash settlement options, the destruction to other benchmarks should be tamer.

The negative price crash is most clearly linked to the shortage in global storage. Currently, global storage for crude is about 90% full and for crude oil products, that figure is closer to 80%. Rystad Energy currently estimates that there is 400 million barrels of available global crude storage left, and that crude stocks will build by 13.6 million bpd on average in the month of May.

The math isn’t overly complicated, and at this rate, assuming storage tanks can only be filled to about 95% capacity due to technical reasons, Rystad Energy forecasts storage is already hitting the wall in the markets. And, it could reach capacity at the last storage facility standing, the US, towards the end of May. Cushing, Oklahoma could top up even sooner.

“No matter how this physical rebalancing occurs during May, we still expect that the oil price bottom is right in front of us rather than behind us. The next question for markets now is what the recovery will look like and how many oil companies are able to weather the storm and bring inevitable field shut-ins back onstream,” adds Dickson.

We still believe in an oil price recovery, possibly starting as early as June, and see a risk for a tight market in 2022 with prices much higher than pre-crisis levels. This will be facilitated by a recovery in demand to above pre-Covid-19 levels in 2022, ongoing OPEC+ cuts, and a loss of supply capacity in both US shale and long-cycled global production. Not all production that is currently being shut-in will be able to swiftly return.

East-West LSFO spread rose to $22/t on 26 March on expectations of delays to eastbound supplies, but may not be serious if traffic at the canal resumes soon, it said.

Due to ban of Qatar Petroleum vessels from using Fujairah as a bunkering location, says Chief Executive.