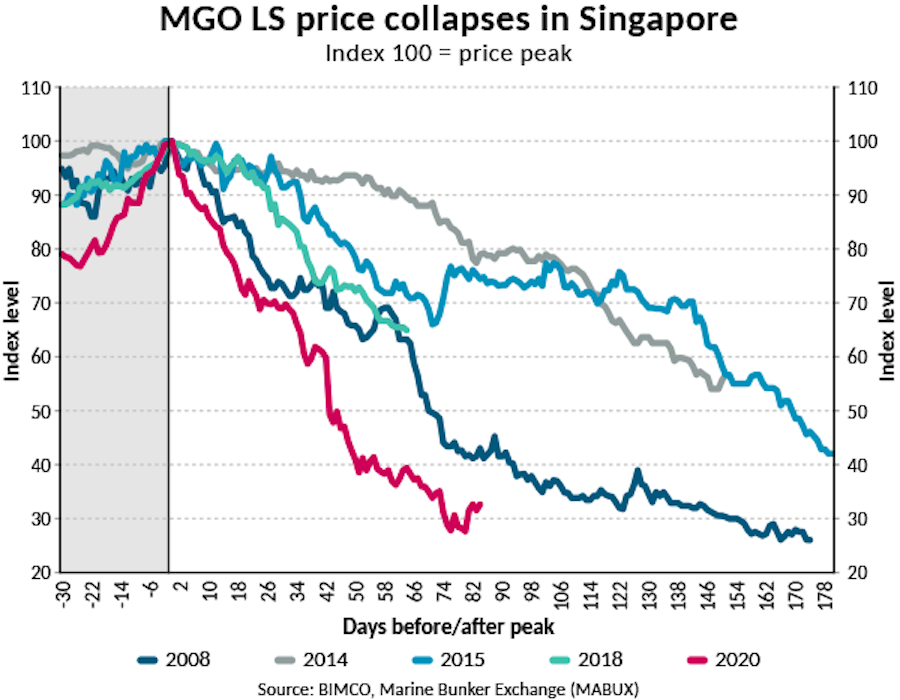 Peter Sand, Chief Shipping Analyst at BIMCO, on Thursday (7 May) published an analysis on the impact of the current global oil market glut on the oil and bunker fuel market in the time of IMO 2020 and the Coronavirus pandemic:

The sulphur regulation from the International Maritime Organization (IMO) that came into force on 1 January 2020 took the centre stage in the shipping industry at the outset of the new decade. Four months on, the spotlights have turned to the coronavirus and the OPEC+ oil price war.

The outlook for global economic growth remains bleak as the world is faced with the largest recession since the Great Depression in the 1930s. Commodity prices have declined across the board and most recently, the West Texas Intermediate (WTI) reference oil future drew headlines as it crashed into negative territory at USD -37.63 per barrel on 20 April 2020.

The sliding oil prices have driven down bunker fuel prices, which hold mixed implications for the shipping industry.

“From a shipowner’s or charterer’s perspective, the lower bunker prices provide a glimmer of hope in bleak times. Perhaps less hopeful are the bunker suppliers, who must now supply bunker fuels at a fraction of the price seen four months ago,” says BIMCO’s Chief Shipping Analyst, Peter Sand.

The International Energy Agency (IEA) is projecting oil demand to collapse in the second quarter of 2020 with a drop of a staggering 23.1 m/bpd compared to last year, and a drop of 9.3 m/bpd for the full year of 2020. The massive supply-demand imbalance has led to a steep uptick in crude oil stockpiling, which will continue to drag on the oil product prices in the months to come.

The OPEC+ cuts amounting to 9.7 million barrels per day (m/bpd), officially in motion since 1 May 2020, have caused prices to tick upward once again. But in the short-term, it will not be enough to balance out the unparalleled demand destruction.

In a matter of months, the oil and bunker fuel markets have been turned upside down. Oil market volatility is at an all-time high, as implied by the oil volatility index (OVX), even exceeding the volatility of equity markets. The simultaneous supply and demand shocks have sent bunker prices racing towards previous low levels with very low-sulphur fuel oil (VLSFO) trading at USD 246 per MT on 5 May 2020 in Singapore.

The current upheaval has collapsed marine gas oil low-sulphur (MGO LS) prices at the fastest pace in recent memory, even exceeding the demise of the Great Financial Crisis and oil crash in 2014. Since the MGO LS price peaked in Singapore at USD 744 per MT on 8 January 2020, the price has declined 67% in 84 workdays, settling at USD 243 per MT on 5 May, essentially a market breakdown in a couple of months.

In 2008, the MGO LS price peaked at USD 1,360 per MT and before starting a prolonged descent, bottoming out at USD 354 per MT after 174 days, a 74% collapse from the peak. While it took over two years to settle at a new peak at USD 1,075 per MT on 11 April 2011, the prices never recovered to previous high levels. Past crises and price shocks serve as a reminder that the recovery is nowhere as rapid as the collapse, and although the nature of the current crisis is different from the previous ones, a price recovery is not likely to follow a sharp v-shaped curve.

“Marine bunker fuel prices in Singapore have collapsed at the fastest rate since the Global Financial Crisis. If the past is anything to go by in this case, the ascent from the doldrums will be nowhere near the same rate as the descent from the peak,” says Sand.

Bunker sales in Singapore illustrate how HSFO is still in demand, constituted by scrubber-fitted ships. Sales for Q1 came in at 12,716 tonnes, 83% of which were low-sulphur fuels, while 17% was HSFO. In total, 8.8 million tonnes of VLSFO were sold, a jump of 83% from the fourth quarter of 2019. This dramatic change in bunker sales is similarly seen in the ports of Rotterdam and Panama. In Rotterdam, the largest bunkering hub in Europe, the low-sulphur to high-sulphur bunker fuel sales ratio came in at 74% to 26%, with VLSFO accounting for 42% of total sales. In Panama, 93% of the 1.3 million tonnes of total bunker sold was VLSFO.

The Panamanian bunker sales highlight the issue of HSFO unavailability. Bunker suppliers have adjusted to the IMO 2020 demand, cleaning tanks and storage to accommodate low-sulphur fuels, which is making it increasingly difficult to source HSFO in the spot market. When combining the hassle of sourcing HSFO and the VLSFO-HSFO spread at extraordinarily low levels, it is likely that some scrubber-fitted ships could even opt to burn VLSFO.

“Bunker sales in major bunkering hubs underscores the transformation that IMO 2020 sulphur regulation has brought with it. Prior to the implementation, the industry was worried about the availability of low-sulphur bunker fuels. Now in April 2020, the availability of HSFO seems to be the most pressing issue in some places – next to that of quality,” Sand says.

Although scrubber owners have seen their investment payback period extended substantially in recent weeks, it is not all cloudy days when looking past the scrubber economics. The lower bunker fuel prices are partly buoying earnings amidst challenging markets conditions.

The VLSFO prices in Singapore averaged USD 245 per MT in April, a massive cost saving from the January average of USD 664 per MT. If assuming bunker consumption of 40 MT per day, shipowners are set to save USD 16,760 per day when going by the averages of January and April. With the lower cost of sailing, some companies have started to sail around the Cape of Good Hope on the Asia-Europe backhaul instead of paying steep toll dues to transit the Suez Canal.

“The depth of the coronavirus crisis and the shape of any potential recovery will ultimately determine how the oil and bunker prices develop in the coming months. With OPEC+ cuts implemented, oil demand must now recover to counteract the massive supply overhang,” says Sand.

A Winding Up Application was filed in November 2020 by the Lim family as contributories of the company, and a hearing has been scheduled for 2 March, 2021.